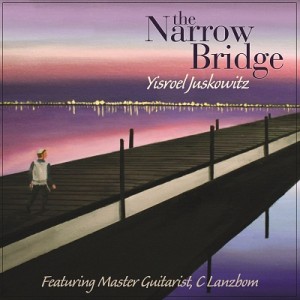 I have long had a theory that while there are many singers who compose their own material,  they aren’t all as talented at both skills as they think they are.  Yisroel Juskowitz is that rare artist who takes my theory and absolutely blows it out of the water.  A talented singer and a gifted composer, who not only paints and draws but also has his first book on spirituality coming out this spring, Juskowitz certainly has more than his fair share of creative talent.

His recently released debut album, The Narrow Bridge, is a collection of twelve Carlebach style songs, eight of which are original compositions.  A joint effort between Juskowitz and Soul Farm guitarist C Lanzbom, The Narrow Bridge also features the talents of Nochi Krohn, Eitan Katz and Yoshi Fruchter.

While Carlebach purists would take me out and stone me, I have never been a fan of the typical “Carlebach sound” but I found myself enjoying this album.  Juskowitz has a sweet, pleasant voice and the music is light, pleasant and easy listening.  The songs are all beautiful in their simplicity, with meaningful words that go straight to the heart.  The cover of the album is an original Juskowitz painting and several other pieces of artwork are underway as well, all inspired by the songs on the album.  Juskowitz, who has been drawing since his youth, began composing when songs literally just came to him, often at significant moments in his life and the liner notes give a short biography of each song, describing its origin.

It would be repetitive to do a song by song write-up of this album, because the songs are all of similar style and all well done.  Both the upbeat, leibidic fast songs and the heartfelt, tranquil slow songs exude Juskowitz’s trademark sweet spirituality with arrangements by Juskowitz and Lanzbom which are clean and uncluttered, allowing the beauty of the songs to shine through.  While I did enjoy all of Juskowitz’s original compositions, my two favorite songs on The Narrow Bridge are two of the oldies, Rabbi Matisyahu Glazerson’s  beautiful Shalom Aleichim and the final niggun on the album, which while attributed to Slonim, is actually a Chabad Niggun, composed in honor of the Lubavitcher Rebbe’s birthday in the early 1970’s.  (For those of you who are music purists, the first two parts of the song were written for the Rebbe’s seventy second birthday with words taken from kapittel ayin beis of Tehillim.  The third part of the song was added the next year for the Rebbe’s birthday with words taken from kapittel ayin gimel.)

The Narrow Bridge is distributed by Sameach Music and in an unusual move, both the album and Juskowitz’s website offer a unique business opportunity, with a commission being offered for recommending the album or Juskowitz’s artwork to a friend.  For more information go to yisroelmusic.com and click on Business Opportunities.

Video sampler of The Narrow Bridge.