HASC 24: An Overview of the Concert! 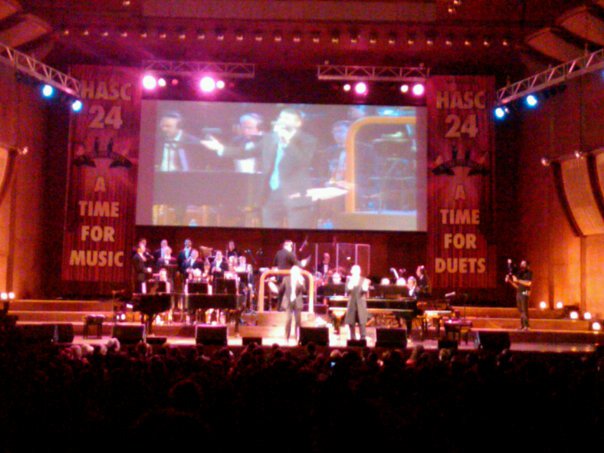 HASC’s 24th A Time For Music, titled, A Time for Duets was jam packed with  incredible music. The evening had some very exciting surprises, as well a whole bunch of artists making their HASC debuts! Here is a short recap of the evenings highlights.

Please note not all songs are listed and the order isn’t exact. 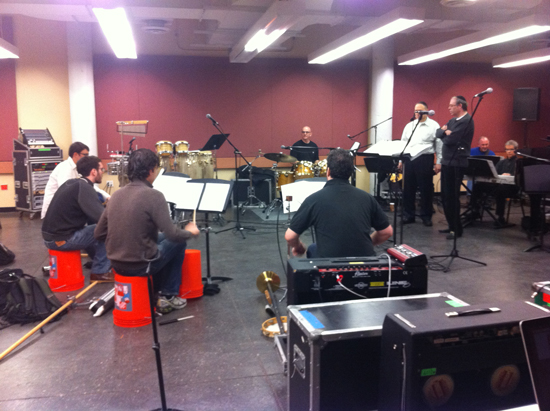 The evening started at 7:30 sharp as Yisroel Lamm conducted the traditional HASC Overture with a very interesting added twist. This year they added additional musicians performing a “trash can” street style flavor. (Those orange containers are the drums.)

Next Nachem Segal came out to start his MC’ing but mentioned how he feels alone being the only one not paired up with someone. Well, out came Country Yossi as a surprise co-host or “duet” with Nachum Segal. Truly a HASC first, Nachum Segal and Country Yossi hosting HASC together!

The first duet of the night was Abie Rotenberg and Baruch Levine. Both artists come from Toronto and Baruch even sang once before with Abie at a very young age. The sang a few songs together including V’zeh, Haben Yakir Li and Small Piece of Heaven. They had some very funny exchanges including one where Baruch said his mother still approves all his songs and asked that they sing Vehu Keili, but Abie said no, since his wife already requested they sing V’zakeini!

Next Ohad and Yehuda Green came out and they sang Days are Coming and Hashiveinu. The two matched each other with incredibly powerful voices and energy on stage. The next duet was Lipa and Shloime Gertner. They sang Gertner’s Say Asay and Lipa’s Mizmor Lesoda. This was, of course, Shloime’s HASC debut and Lipa poked fun since Shloime was wearing the more traditional Bekeshe and Lipa was wearing his white Bekeshe (long coat.)

At this point the evenings sponsors and honorees were thanked and given special appreciation for their roles in helping HASC.  The next duet was Shalsheles and Shalsheles Jr taking the stage together for the very first time at HASC. They sang Baruch Habah, Yerushalayim, Modeh Ani, Yafyafisa and more.

The next duet was Avraham Fried and his nephew Benny Friedman. The warm chemistry between these two was magical. They opened the set singing Moriah, a repeat of the famous YouTube clip that has over 150,000 views. They sang the song  walking toward each other and when the song was over they hugged and Avremel gave his nephew a kiss. It was a touching moment. Avraham Fried then went on to the next song by singing the opening line from Benny’s Taamu. The two sang the title track from Benny’s debut album as the crowd cheered on. The final song of the duet was Fried’s Rifoeinu. The two Friedman’s sang beautifuly together as their voices complimented each other very nicely.

The first surprise of the evening was guest Violinist Daniel Ahuviel who performed a string of Niggunim and dances as the crowd clapped and really got into it. The next duet featured the second surprise of the night, Israeli superstar young soloist, Yonatan Sheinfeld who just released his second album and Live DVD, singing a beautiful and moving ballad from his latest album with Ohad.

Lipa then came out looking for someone to sing a duet with him. When he couldn’t find someone he turned to the video screen as a 60 year old Lipa appeared staring back at him. What followed next was a very funny and well played out video featuring the two Lipa’s singing a brand new song, composed special for HASC talking about the days when Moshiach will be here.

The next surprise of the evening was Eli Gerstner and the Yeshiva Boys Choir! YBC sang Mizmor Shir and the crowd was very excited to see the choir return to the HASC stage. The dancing and choreography, led by Yossi Newman was very impressive. Shloime Gertner then came out and sang a duet with Avraham Fried. They sang Nissim and Fried’s wildly popular wedding hit, Ki Hirbaisa.

The show ended with a Finale that brought down the house! The entire cast on stage singing a medley of songs from Yehuda Green’s Moishele’s Niggun to Lipa’s Hantelach to Abie’s Neshomele to Ohad’s V’erastich, Gertner’s Happy Birthday, Shalsheles’s Mi Haish to Fried and Benny singing last years hit song, Changing the World.

HASC 24’s A Time for Music was a smashing success with many exciting surprises and of course many incredible duets. Of course let’s not forget to mention the HASC choir led by Shloime Kaufman also featuring Shalom Jacobs. Don’t worry! The show was recorded and if you missed this amazing evening you will be able to watch it on DVD and CD I’m sure.

As Nachum ended the evening he invited everyone to come back for HASC 25! Hopefully to be held in Yerushalayim with Moshiach Tizkeinu, and of course Zayde Lipa!