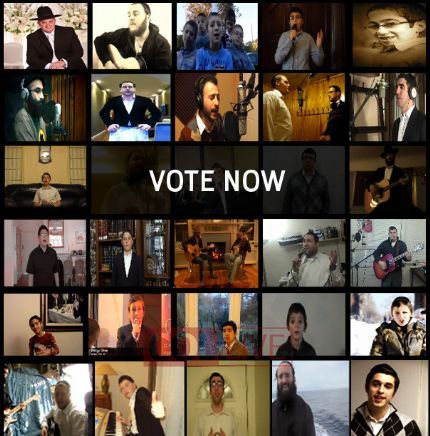 A Jewish Star singing talent competition is well underway after a record number of contestants from around the world auditioned for Season Two.

144 auditions who fit the strict criteria were accepted to join the music contest – 77 in A Jewish Star and 67 for A Jewish Star Junior – the new division for boys ages 8 to 14.

“Without a doubt this is the most ambitious grassroots project in the Jewish music industry,” said Mica Soffer, Executive Producer of the competition.

Aderet and others in the music industry are keeping close tabs as voting has officially opened December 30 2010. Rating contestants from 1 to 5 stars, the public will be choosing 10 finalists and 3 junior finalists that will continue on to perform in the season finale – A Jewish Star Live Show on February 20, 2011.

At the show in the Brooklyn School of Music, judges Avraham Fried, Eli Gerstner and Mendy Pellin will be choosing 3 runner ups, and from them the next Jewish Star and the next Junior Jewish Star.

“The idea of this contest, that anyone can just display their talents to such a huge audience and be discovered in minutes instead of the years it would have taken in years past really appealed to us,” said Mendy Werdyger, CEO of Aderet/Mostly Music, the largest distributor and promoter of Jewish music and one of the sponsors of the contest.

Werdyger, who distributes Mordechai Ben David, Yaakov Shwekey, Lipa Schmeltzer, Miami Boys Choir and many of today’s new artists, said “the competition will bring an entire new dynamic and level to the world of Jewish Music. We can definitely expect a surge of new and fresh talent.”

As predicted, many of the auditions were sent in days and even hours before the deadline on midnight of Tuesday, December 28, 2010.

“Some auditions were filmed in New York despite this week’s massive snow blizzard that pummeled the city and nearby regions,” said Yehuda Ceitlin, Creative Director of A Jewish Star.

“Besides for the numbers of contestants (and the many we needed to turn down), what is interesting about this season is the variety of songs,” Ceitlin noted. “There are impressive voices singing the expected classics – ‘Piha Pascha’, ‘Anovim’, One Day’ and ‘Vezakeini.’ But then we have a number of good songs composed by the contestants themselves.”

21,515 votes were already counted within the first few hours of the online voting. To keep voting the most accurate and secure possible, a registration process is required.

Here are a few quick steps:
1. On www.AJewishStar.com, click REGISTER (on the top bar under the categories) or click here.

2. Chose a username and a valid email address and click “register.”

3. Check your email inbox for an email from wordpress@ajewishstar.com

4. Copy the temporary code you were given and paste it in AJewishStar.com with your username.

5. Congratulations, you are now logged in. We recommend you change the password to one you will remember.

6. You may vote once per contestant, rating them from 1 – 5, with 5 giving the contestant the highest score.