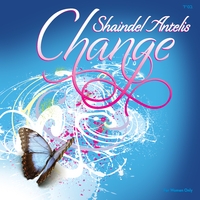 I have a confession to make.  In fact, it is probably good that I write anonymously on this site so that my kids don’t get tossed out of school for what I am about to admit.

I am a Hannah Montana fan.   It’s not like I have heard too many of her songs, but I have been very impressed with the ones I have heard.

Are you ready for another major relevation?

Shaindel Antelis’ newly released second album, Change, for female listening audiences only, is exactly the soundtrack I would imagine if there was ever a movie made where Hannah Montana discovers she is Jewish, goes to seminary in Yerushalyaim and discovers that what life is really all about.

Shaindel’s unique blend of contemporary pop music with a hint of country is, for me at least, pleasantly reminiscent of Hannah Montana, but with inspiring messages that speak directly to young Jewish women, especially those who might be struggling with difficulties in their lives.  While I have always believed that artists who are equally gifted as vocalists and as composers are few and far between, Shaindel is one of the rare few who excels as both a composer and a vocalist.

Shaindel’s sound is fresh, new and very today.  I could go through this album song by song, but it would get boring very fast because I would be saying pretty much the same thing about each of the fourteen songs on this CD.  They are all strong compositions, with meaningful lyrics and terrific vocals.  Numerous members of the Antelis family lend their talents to this project, with Shaindel’s dad, Moshe Antelis co-producing and playing guitar and bass, brother Jake co-producing, recording, mixing and mastering the album in addition to splitting drum duty with yet another brother, Ben.  The songs are all on the short side, with the album clocking in at just under fifty minutes and some of the songs end a little abruptly for my taste, but I can honestly say I really enjoyed every song on this CD.

It would have been nice to have lyrics included in an album such as this where the words are integral to the songs, but the nature of the CD case didn’t allow for an insert.  I am sure that the lyrics will be posted soon on Shaindel’s site, shaindelantelis.com.  Currently, this album is  available for purchase at Shaindel’s website and  cdbaby.com.

With her rhinestone studded guitar, Shaindel makes a valuable contribution to the Jewish music market, proving once and for all that when it comes to a “girls only CD” there is no reason we have to be subjected to music that is anything less than excellent.