A short note from JMR:One of the biggest Mitzvos of Chanukah is spreading the story and the light of Chanukah. We want the entire world to know of the great Neis that the Aibishter did for us! With this goal in mind, this video has done that on a level so few of us could ever hope to achieve on our own. At the time this is written it is up to 870,000 views!

The Kiddush Hashem this group has performed in the eyes of the entire world is nothing short of tremendous. The Pirsumei Nisah that this video has accomplished is surely bringing incredible Nachas to the Aibishter.

In addition, if you would like to help spread the story, the message and the light of Chanukah, sign your family up for Chanukah outings! You could visit nursing homes, hospitals and places where Jewish people live. You can bring candles, gelt and information about Chanukah to Yidden who don’t know, or don’t have access to these things. Find out more about this by visiting this link on ColLive.com or email ChanukahMivtzoim@gmail.com. The Maccabeats have done their share, now you can also! 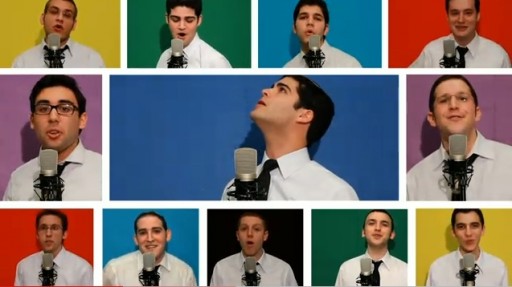 New York – The Maccabeats, Yeshiva University’s fourteen man a capella group consisting of ten undergraduates and four alumni are on fire. Their Chanukah video, Candlelight, a remake of a popular secular song has gone viral with over 870,000 hits on YouTube in just one week, with over 300,000 hits in the past 24 hours alone.

Candlelight has become so popular that it has been featured on CNN, The Los Angeles Times, The New York Post, The Huffington Times and is on both MTV’s and AOL’s home pages. The song was also played this morning on The Today Show and the Maccabeats have taped segments for both CBS and NBC News.

Featuring members of the Maccabeats in white dress shirt with black skinny ties against primary colored backgrounds, dressed in togas at Fort Tryon Park and enjoying a Chanukah party in the Manhattan apartment of a Fordham University law student, the video tells the story of Chanukah in three minutes and forty two seconds, amid latke flipping, jelly donut eating and dreidel spinning fun.

The songs was the brainchild of Fordham University law student Immanuel Shalev who was listening to the original song on his iPod one day when the words “I throw my latkes in the air” came into Shalev’s head. Sticking as close to the original song lyrics as possible, Shalev and co-lyricist David Block manage to tell the story of Chanukah without ever using the word “Chanukah” in the song at all.

“We never expected anything like this,” said Shalev in an exclusive interview with VIN News. “The Maccabeats follow Yeshiva University’s motto of Torah U’mada and while we do listen to secular music, we try to only do meaningful songs, bringing kodesh into the secular.”

The video was filmed by Uri Westrich who was a major force behind Candlelight, using his creativity and eye for detail to produce a top notch video. In fact, while the actual filming of the video took only four days, Westrich spent three weeks editing the video until the final cut was ready.

A behind the scenes video on YouTube offers a peek into the filming of the video, showing the brightly colored cloth backgrounds being taped to a whiteboard in Yeshiva University with silver duct tape, latkes being flipped in the air and ending up on the floor and toga clad Maccabeats in Crocs and sneakers chasing each other around Fort Tryon Park with swords.

Shalev confesses to being stunned by the success of the video, saying “We are just shell shocked and are trying to internalize what is going on here.”

But the most meaningful comment Shalev has received so far came from one viewer who said that after watching the video, he opened up a gemara and learned a daf of gemara, something he would not normally do.

“It is just insane,” said Shalev. “We never expected anything like this to happen.”

Be sure to check out another great Chanukah video, by Six 13 here.