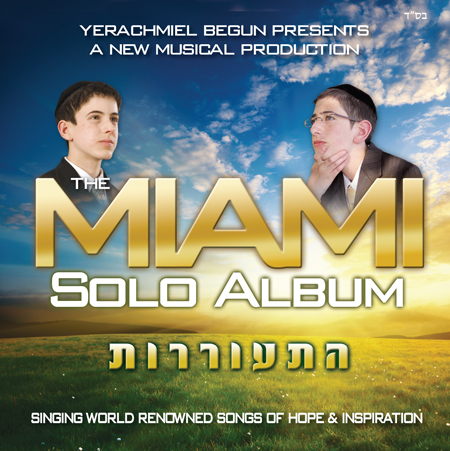 Overall: There is a great selection of slow and meaningful songs on the album. The soloists all have good control over their strong voices. What’s unique about the album is that the soloists are boys and the choir that joins some of the songs are made up of men. Usually it’s the other way around. It’s refreshing to hear it this way.

Yerachmiel Begun has been waiting 5 years to put this album out and while the songs may not be new and exciting, the album itself has new arrangements for each song of a higher quality then that can be said of most of the previous arrangements for these songs. It was worth the wait and this album is a nice addition to the Miami collection.

A little whiny, but it’s evident that the whine in his voice is from him trying to be as emotional as he can be when singing. The song is a little too long though for being so repetitive with its lyrics. Then again, the whine makes sense if he’s trying to copy Avraham Fried’s version of the song. However, Fried manages to cry and whine without taking away from his songs.

Personally, I’ve always loved a different tune of Al Tirah (Kol Noar did a good job on on that one), yet this one is also very good. The singer’s voice is very soft and sweet. I’m not sure if it’s the song’s arrangements or if it’s the singer, but whatever it is, the song really reaches the listener’s Neshama.

A 50 second intro is usually too long for me, but didn’t seem too long with this song because it really lead nicely into it. The soloist has such power and control. This song is a constant request at weddings and there is yet to be a version of it better than MBD’s version on Yossi Green’s “The 8th Note”.

Sorry Shwekey, but someone has managed to out sing you on your own song. Absolutely incredible! the singer does a magnificent job keeping to the original song yet making it his own. He’s very clear in pronouncing all his words; i always had a hard time making out many of the words when Shwekey sang. It’s totally worth waiting till the end of the song to hear the singer at 6:46. He has such a range and this part captures his talent at his best.

Here’s a deep, steady voice – totally made for an Abie song. There are so many different tunes for Ani Maamim, and this voice really fits this particular tune. At 1:06 it shows his range. He can sing all parts fo the song without his voice faltering. Another song that goes straight to the Neshama.

He did a good job singing this Baruch Levine song, yet I think his voice was stretched a bit for it. Baruch Levine has a range that most people don’t have the pleasure of having, and to try to match it proved costly here.

This is the only song that starts with the choir. The singer makes a very smooth transition from it to singing solo. What power! Another Neshama tugger!

Arrangements are so good that you hear the lyrics even when there’s no singer but just music playing. The singer really gets into the song and that comes out through how much power it seems he puts behind each individual word that he sings. At 2:48 the choir comes in. It’s great timing, for it breaks up the song nicely. There’s a good balance between the individual singer and the men’s choir. This song was definitely one of MBD’s most heartfelt songs.

I’ve always recognized  and admitted the power it takes to sing a song like this one with such emotion. However, this song has never tugged on my heartstrings, rather it has tugged at my brain, inducing a headache. Shaul Elson, the soloist did a fantastic job on this album with the other songs he sang. It is almost unfair that this song was given to him, tarnishing his perfect score. The song sounds choppy vocally (not technically) and seems to go on and on. The good news is, this is really the only song that didn’t appeal to me on the album.

Should we show up Shwekey again? Well at least we can try. It’s like a mini Shwekey! You can tell he’s trying to sing like Shwekey with the cry in his voice. 3:25 really shows the control he has over his voice. While you my have heard this song on every recent simcha album and at every wedding, it’s always nice to have a recording of a child to add to the Vehi Sheamdah collection on iTunes.