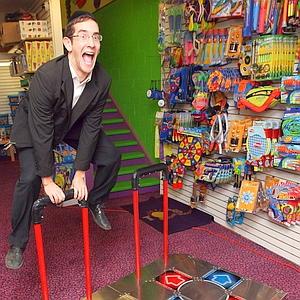 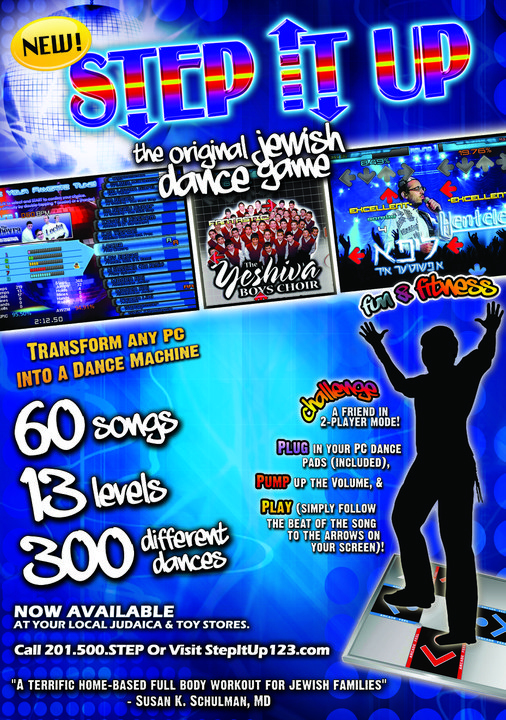 Bust out the hora!

A new video game modeled after the arcade staple “Dance Dance Revolution” is rigged for Orthodox Jews who want to boogie down to techno versions of Hebrew and Yiddish songs.

The game, “Step It Up,” is an alternative for religious Jews who might otherwise get their meshugeneh moves on to sex-charged Lady Gaga and Ke$ha jams.

“The game meets our standards for modesty,” said Faigy Grossman, 25, the inventor.

Grossman’s version doesn’t feature any gyrat ing silhouettes or lyrics about “bluffin’ with my muf fin.”

Instead, the screen displays shots of popular male Jewish music stars like Lipa Schmeltzer and Avraham Fried, who belt out their biblically inspired, techno-infused hits.

Grossman, a former teacher from an all-girls yeshiva, said she came up with the idea three years ago when she took her students on a trip and they got her to play “Dance Dance Revolution.”

“I thought it was really fun, and I was surprised I hadn’t heard of the game yet,” she said. “But the music just wasn’t appropriate.”

So she learned to program, and financed her own version, which hit Jewish-owned toy stores in Brooklyn and New Jersey earlier this month.

“It’s definitely one of our hottest items this season,” said Michael Tool, manager of Toys For Thought in Lakewood, NJ.

“In arcades, you see a lot of Jews playing [“Dance Dance Revolution”], but they wouldn’t feel comfortable bringing it home. Finally, here’s something that’s kosher.”

Even the big-name Jewish idols featured in the game are kvelling over it.

“In a world where everything is rushing and people are trying to do a million things at one time, here at least you have an opportunity to play a game, exercise and listen to your favorite music, which brings out spiritual messages,” Schmeltzer told The Post by phone from Tel Aviv.

“So you are doing four things at the same time.”