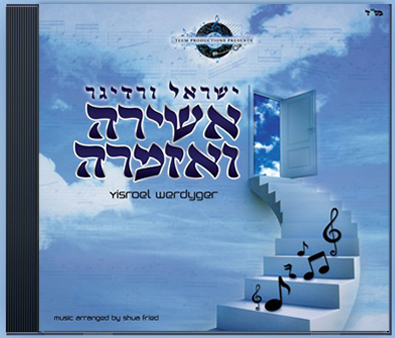 Before I begin my first impression of the hottest new album in Jewish music since Yisroel’s father, Mendy Werdyger, released his amazingly enjoyable album Tomid B’chol Yom, I would like to comment on this branch of the Werdyger family. Many times an album can be highly anticipated because of the reputation of the performer, and Yisroel’s was highly anticipated because of his sweet smooth voice, and just like his father, can make a Jewish sounding, yet refreshingly current album that is easy listening all day and night long (and I am speaking from experience). Saying that, I was even more intrigued how Yisroel and Teem Productions would be able to put out a recording that would top Bayis Neeman, which I listened to nonstop for a long time after its release (and still associate some of the songs with specific incidents in my life). Well my friends, I present to you the perfect sequel to Bayis Neeman: Ashira V’azamra! I do not like to give my complete opinion on a CD until listening to it for a while, but as a first impression, Ashira V’azamra sounds like another huge smashing success with several songs that could become the next hit songs at weddings all over.

Simcha Shel Mitzva: Composed by Ari Haas, a newcomer to the Jewish music industry, this is a perfect upbeat song to begin the album. This song has some really nice horn pieces (sorry, I do love them even if the concept is thought to be outdated by some) and guitar solos. My only reservation about the song, are the words, which are a little obscure and “al pi” the Peleh Yoetz, but otherwise a great song!

Anu: Another fabulous Yitzy Waldner creation. This has all the makings of being the next horah hit. This is very nicely arranged by Shua Fried, as is the entire album.

Ashira V’azamra: The title track of this album, and is a beautiful hartzige nigun composed by Yitzy Waldner. The adult choir sounds really nice and Yitzy also sings backup vocals on the song too. I really love the words and the meaning of them. What a way to thank Hashem for everything he does for us. This will be a very popular song.

Dovid Hamelech: A very nice and upbeat song composed by Meshulem Greenberger, who also sings backup on this, and features child soloist Yehoshua Aryeh Mandel. I have never heard of Yehoshua Aryeh before, but he has a really nice sweet voice (which I guess fits on this album)! This song is eerily similar to Emor from Bayis Neeman, but an enjoyable song nonetheless.

Doros: Another upbeat sweet song, but not one of my favorites. It’s composed by Motty Ilowitz (also the composer of Bayis Neeman) and incorporates Yiddish words really nicely into the song (as he does in Bayis Neeman).

Eishes Chayil: A waltz composed by the one and only Yossi Green. Yossi also sings the backup vocals in his inimitable style. This is another enjoyable and easy listening song, but my personal shita on including Shabbos zemiros on an album, as I’ve written before, is that it takes an unreal and unbelievable song to make it as a staple of the Shabbos seudah, and most songs, unless they are composed by someone near and dear to you, will never be sung. One cute part to this song that gets filed in the “good chap” department is the laugh at 3:38 as Yossi Green sings “vatischak liyom acharon”.

Veahavascha: A beautiful hartzige niggun composed by Pinky Weber and once again, featuring child soloist Yehoshua Aryeh Mandel. This song really puts a spotlight on Yisroel’s beautifully sweet voice. (Did I mention that I love his voice?)

Mi Chacham: A nice horah but not one that I think will become a hit on the wedding scene. This is another song that integrates Yiddish lyrics (and I might add, simple enough that I can understand them too) into the song really nicely.

Shema Koleinu: The second of three songs composed by Yossi Green on this CD, and in my opinion, the best of the three. This is a very hartzige song with the perfect words to match the mood of the song. It reminds me of Aneinu (or Aneini) by Sruli Ginsburg. Since it is not as upbeat as most of the slow popular songs nowadays, I don’t know how popular this will become, but this worthy of being sung all over. The only down part to the song is the ending, which like many of the songs on this album end abruptly.

Motzi: A pleasant song composed by another newcomer to the Jewish music scene, Avrumi Zhupnik. It reminds me of a song by the same name from Shlomo Simcha’s first album (or cassette, if I can use such a word) That Special Melody. There are some really nice harmonies by the choir on this song.

Hineni Heani: The third song on this album by Yossi Green, is a haunting tune with words from the tefilla that is said by the baal musaf on the yomim noraim before shemoneh esray. From a musical standpoint it is a beautiful song. As someone who grew up davening in a Yeshiva where the tefillos of yomim noraim are taken very seriously, I personally feel that the tefilos of yomim noraim should not be used as songs. Saying that, I feel that if someone is looking for a fresh nigun to integrate into their nusach hatefila, this passes the test (as long as you can work around the words being repeated).

General opinion on the arrangements: This album is arranged entirely by one arranger, which is not usually the norm in the industry today, so unsurprisingly, there are definitely similar styles being repeated over and over. I don’t think it’s a bad thing, especially since I think they are nice, but I am just pointing it out. The only part that bothers me, as I pointed out before, are some of the endings, but that doesn’t take away from enjoying the rest of the album.

In conclusion, I feel this album is one that is not only enjoyable and refreshing, but also with a true Yiddishe Taam. It will be a best seller! You can buy or download the CD here http://www.mostlymusic.com/ashira-v-azamrah.html