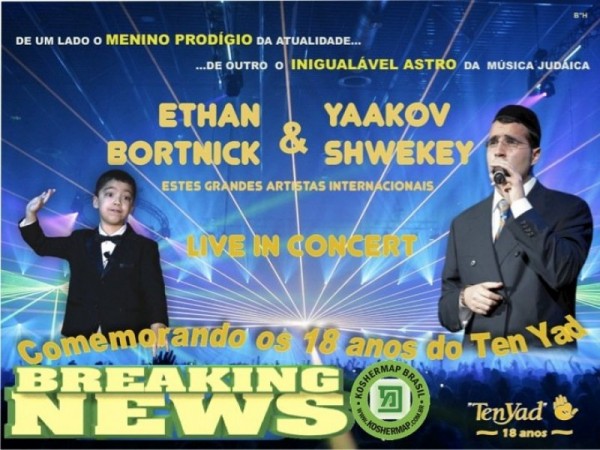 On Wednesday night, 17th of November 2010, 11 of Kislev 5771, Ethan Bortnick & Yaakov Shwekey presented the “TenYad Live” in Concert in the city of Sao Paulo in Brazil celebrating the institution eighteenth year of social service and care for the Jewish people and human beings in need in Brazil.

Directed by Chabad Rabbi Y. David Weitman Shlita, TenYad institution’s priority is not to allow recession’s cruel arm to impair human being’s ability to respond to the hardships of life. Financial distress can become a dreadful prison for the individual. Throughout its 18 years of existence, Ten Yad has developed special food programs that attend to specific groups of users. Thousands of people receive hot and nutritious meals every day through more than 10 programs currently under operation, including the unprecedented “Meals on Wheels” program that ensures food safety for elderly people who cannot displace themselves due to severe health problems and more. To discover this beautifull project or to donate:http://www.TENYAD.com.br

On the Live in Concert Show in Brazil the 9 year old piano prodigy Ethan Bortnick won the audience from the first moment, acting, playing and singing by himself and also in a dueto with the Jewish superstar Yaakov Shwekey and the boys of the Pirchei Choir of Safra’s Beit Yaacov School in Brazil.

Yaakov Shwekey presented to the audience many hits, including newly songs from albums as Libi Bamizrach and others, and incredibly sing three Chabad Nigunim.

It was an amazing show for an amazin cause that will be remebered by many hundreds, thousands from Brazil and the world.