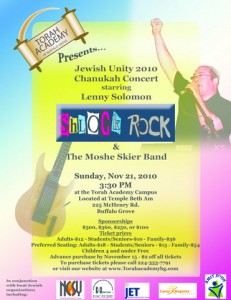 Shlock Rock is a Jewish Rock Band that teaches Jewish ideas through music using song parodies, original music in both English and Hebrew and children’s songs. Lenny Solomon started the ball rolling in 1986 and since then the band has released more than 30 amazing albums! Shlock Rock has gone where no Jewish bands have gone before: Trivial Pursuit, Imus in the Morning, Newsweek, The Wall Street Journal, and Entertainment Tonite. Most important of all, Shlock Rock has gone straight to the hearts of Jewish families everywhere.

Lenny Solomon now resides with his family in Israel. Dr. Moshe Skier, one of the original members of Shlock Rock, has his own successful band. He lives and practices in Milwaukee, WI. The concert will take place on Torah Academy’s campus located at Congregation Beth Am at 225 McHenry Rd in Buffalo Grove, Illinois (45 mins outside of West Rogers Park). This concert will be enjoyed by all – children, teenagers and adults. To purchase tickets please call 224-353-7791, visit the school’s website at www.torahacademybg.com.torahacademybg.com