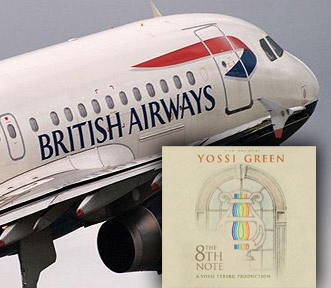 Sea Gate, NY – In what may be a first for the mainstream Jewish music market, composer Yossi Green confirms that British Airways will be featuring his 8th Note CD on most of their flights as of February 1, 2011.

, released in 2008, was hailed by many in the Jewish music world as the album of the year, with some calling it possibly the best album of the decade.  Produced by Yossi Tyberg and featuring the iconic song Anovim, the album was bursting with innovative and original music with vocals by Jewish music’s elite including Mordechai Ben David, Avraham Fried, Lipa Schmeltzer, Chazzan Yitzchok Meir Helfgott and many other notable singers.

It was avid fan Chaim Feld, of Feld Music Productions in London, who deserves the credit for taking 8th Note to the skies.  As a frequent traveler on British Airways, Feld noted that the airline features Turkish music among many other different genres and he wondered why British Airways couldn’t offer music to accommodate their Jewish passengers as well.  He submitted songs from several different artists including Lipa Schmeltzer, Ohad, Chaim Yisrael, Shloime Gertner, Shloime Taussig and two songs from the 8th Note, Kanei and Anovim, to Spafax, the London company that manages in-flight entertainment programming for numerous airlines including British Airways, for their consideration.

While Spafax receives countless songs from music hopefuls, thousands are rejected annually.  A company representative contacted Feld and told him that while the airline might be willing to consider adding Jewish music to their in flight entertainment system, they could only commit to putting up one album.  With so many musical styles and different artists, 8th Note seemed like the strongest contender.

Weeks went by with no news.  Feld’s contact at Spafax was promoted and it seemed as if the 8th Note was never going to get off the ground.

Until a second call came in from yet another person at Spafax who heard the album and was instantly smitten.

“They loved the album and everything about it,” said Green in an exclusive interview with VIN News.  “The cover, the booklet, even the little anecdotes that were in the booklet, they thought it was magnificent.”  Green was told that the album was being sent to the people who make the final decisions, but assumed it was never going to happen.

In fact, the final decision was a resounding “no”.  Spafax declined the album, concerned it could create issues for British Airways’ many Muslim passengers.

Unwilling to concede just yet, Feld escalated his request to a manager, suggesting that Spafax reconsider in an effort to accommodate Jewish passengers, many of whom had begun choosing El Al instead of British Airways.

Wednesday morning’s mail brought the good news that 8th Note will be featured on British Airways’ in flight entertainment system for five months, starting on February 1st, 2011.  If the music is well received, British Airways will keep 8th Note on their planes for an additional five months.  An account coordinator from Spafax has confirmed to VIN News, that the 8th Note will be uploaded to their in-flight entertainment system as of February 1st.

Green confesses to being more than a little stunned by the decision.

“To hear from people with no shaychus to Yiddishkeit that they loved the album? Clearly they are trying to lure back the Jewish market and my understanding is that they are going to use this album as the crux of an ad campaign for British Jewish newspapers.  To hear that Jewish music has been elevated to the point where even people in the secular world love it?  That is truly amazing news.”