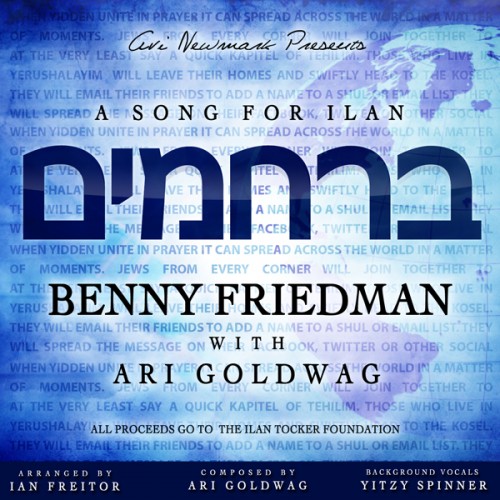 Available for only 99 cents on MostlyMusic.com or on iTunes

Singer Benny Friedman is just one of the many artists to volunteer his talents for a new single, entitled Berachamim, being released today.  The song, produced and directed by veteran producer Avi Newmark, is being released to benefit Ilan Tocker, a 33 year old father of four and resident of Cedarhurst who suffered a severe brain injury this past summer.

Doctors gave Tocker a ten percent chance of survival, but Tocker’s friends and family joined together, contacting everyone they knew, begging people to storm the gates of heaven with prayers and good deeds, dedicated to Tocker.   Within minutes, there were people literally all over the world doing anything they could to find heavenly mercy for Tocker.

Despite the odds, Tocker pulled through and doctors consider him to be a medical miracle.  Newmark, a close friend of Tocker’s, was inspired by the compassion shown by friends, relatives and strangers alike and the concept for the song Berachamim was conceived as he sat in the ICU waiting room, waiting for a miracle to happen.

Newmark confesses he has never davened so hard in his entire life.

“The power of tefila is not just about opening a siddur and davening,” said Newmark.  “It is about each of us using our own strengths, doing what we can to find zechus and hopefully find favor in Hashem’s eyes.  People didn’t just daven for Ilan with their mouths.  They davened with their entire being, in the actions that they did.  Clearly the rachamim that Hashem showed Ilan was a reflection of all the rachamim that people showed for Ilan.”

Over the past three months, not only have countless people continued to daven for Tocker, but numerous fundraisers have been held in the Five Towns area, including an Arba Minim sale, a ping pong tournament, a basketball tournament and a Chanukah fundraiser featuring actor/comedian Elon Gold is being held on Chanukah.  Proceeds from all these events are going to The Ilan Tocker Foundation, which was created to defray the staggering medical costs the Tocker family is now facing.

Berachamim, which was composed by Ari Goldwag, features the talents of some of the music industry’s finest including Benny Friedman, Ari Goldwag, Yitzy Spinner, Ian Freitor, Aryeh Kunstler, Gal Gershovsky and Sruly Meyer.  The song is available for 99 cent download on Mostly Music and iTunes with all proceeds going to benefit The Ilan Tocker Foundation.

Continuing to defy the odds, Tocker is back home in Cedarhurst and was in Shul this past Shabbos where he received his first aliyah since his injury occurred.  While he still faces many long months of therapy, doctors are optimistic that he will make a full recovery.

Letter from Avi Newmark, the producer:

A night I will never forget.

My dear friend Ilan Tocker suffered a brain injury so devastating that doctors were awed that someone in such critical condition could still be clinging to life. To me, sitting in the waiting room of the ICU, it was clear what needed to be done. We spread word of Ilan’s terrible accident to anyone who could daven for him, asking them to beg the Riboinoi Shel Oilam to have Rachamim and not let one of my best friends succumb during this terrible time.

A husband, a father, a son, a tremendous baal tzedaka, a compassionate man who loves his nation, who would do
anything to help a fellow Jew in need now needed us to do everything in our power to help him. The immediate
response to the many emails and text messages requesting people to say Tehillim for Tzvi Ilan ben Gita was absolutely
overwhelming. Within minutes we heard about someone at the Kosel gathering Jews and saying Tehillim, about over two hundred people gathering in standing room only homes to say hours of Tehillim for Ilan in this most dire of straits.

Every bracha that was made, every penny that was given to tzedaka, every perek of Tehillim that was said made a
difference. Ilan made it through a surgery that doctors had given him only a ten percent chance of surviving. It was clear to us that all that Ilan embodied, all the goodness he had done for others was now being done for him. All
the compassion Ilan had shown to others was now being shown to him.

Berachamim. We ask Hashem to hear our tefilos, hear our cries, hear us beg and plead. But there was something more that I witnessed and that was how just as we asked Hashem to deal with us Berachamim it was with Rachamim that all those who heard about this nightmare were davening for Tzvi Ilan ben Gita. And it was with that realization that this song came to be. This song is about everything I witnessed Klal Yisroel do for Ilan. It didn’t matter whether people knew Ilan or not, our nation assembled with fire, intensity and most of all, Rachamim, to do whatever they could to find favor in Hashem’s eyes to help our friend, our brother, Tzvi Ilan ben Gita.

The top talent in Jewish music today has selflessly joined me in the production of this song. Each and every one of them jumped on board instantly, lending their talents before I could even finish asking them for their help. Benny, Ian, Ari, Yitzy, Aryeh, Gal and Sruly: I cannot thank you enough. We have all worked together in the past, but this song means more to me than anything I have ever done. It is the story of how my beloved friend was saved. It is with your help that I can now release this song and donate all the proceeds to the Ilan Tocker Foundation which will help Ilan in his recovery.

To the listeners: If you buy one song this year please, please, please let it be Berachamim. Let us continue the amazing call to arms with which we all gathered together as one and battled for Ilan’s recovery.

And to Ilan: I love you and there are no words to describe seeing you return to Shul this past Shabbos and receive an aliyah. I would say I am here for you but you are even more fortunate than that. We are all here for you. Klal Yisroel is here for you and it is with the collective strength of our people that you will continue to fight and get better, bringing our people nachas and simcha, and most importantly, bringing us Ilan. 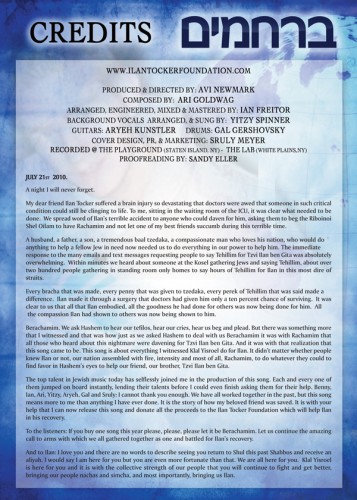 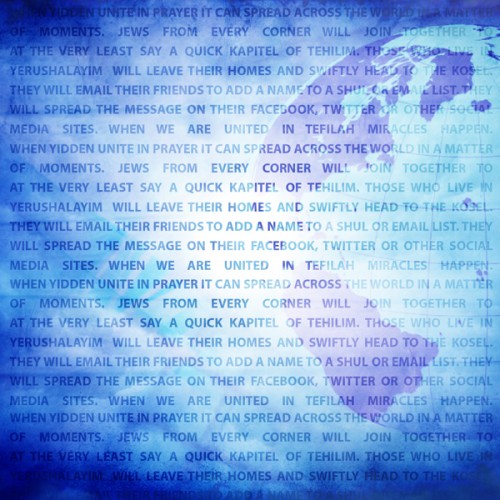