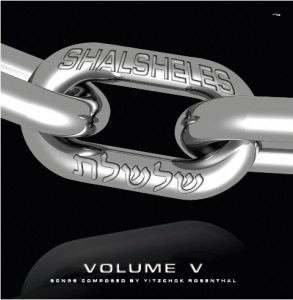 Yitzchak Rosenthal is back with his expert compositions for Shalsheles V. Although the group remains intact, Simcha Sussman is now recording from Israel, his new home.

Shalsheles has always been known to be “bed time music.” It’s relaxing, refreshing and not in your face. Last album, they changed that style with Yufyafisa and Kel Hakavod and fans were eating it up. A.K.A. Pella made a remix of Yufyafisa not once, but twice (with the help of Shalsheles Jr). In this album, you’ll find songs like Ashrei Ish, Mi Chamocha and Me She’asah, which add a fresh, modern day feel that’s constantly missing in Jewish music.

As Jews, we live by our heritage. We keep it intact and pass the mesorah down from generation to generation. However, the style that is Jewish music is not a mesorah, it is music from 30 years ago. It’s just outdated music. Slowly, musicians are starting to realize that in order to appeal to the younger crowds, they need to change their music. By doing so, they are not breaking a mesorah, they are just breaking a bad habit of staying with outdated music. I’m glad to see that Shalsheles clearly notices that Jewish music is evolving and needs to. They have shown this by bringing in Aryeh Kunstler’s musical talents to the third song, Ashrei Ish. I hope more of the Jewish musicians follow in those footsteps and update their music as well. Shalsheles has managed to change the style of music to sound better, but not secular and electrified, like much of today’s contemporary secular music.

I heard a great line the other week. When I asked about the chol hamoed concerts in New York this year (not the boys choirs), and what the crowd was like there, I was told the following. “All the concerts on Chol Hamoed were empty, I think people are starting to realize that it’s (concerts) not much more than a wedding without the shmorg!” It’s true. With the abuse of outdate music and horn instruments, which rightfully belong at a wedding to give it that special “wedding feel”, the concerts are just wedding that you have to pay to go to and you don’t get any food! As Jewish music evolves and the fan base grows, I think we will find that concerts will be a lot more exciting!

Once again, kudos to Shasheles for keeping Jewish music refreshing!

(Instead of giving you long, boring, detailed recaps of each song, I’ll give, what I thought were the positives and negatives of each song. I’ll let you decide the rest! :D)

+ Great music on the intro, especially the keyboard behind the opening lyrics

+ Simcha Sussman sounds amazing, despite being in Israel

– Would have liked some more high harmonies instead of choir harmonies

– Song fades out, which is outdated

+The composition is top notch. Think Kel Hakavod from the last album, but better

+ Hands down, best slow song on the album

+ Addictive and transcending song throughout

+ Beginning to end of song is flawless

–Chaim Block fades prematurely for me at 1:56

+ They only have one of these songs on the album

+ Pure and fluid song throughout

+ Not Aryeh Kunstler arrangements, but still contemporary and fresh

+ The chorus is out of this world. Different. Harmony filled. Refreshing.

+ Choir to end of the song is fantastic and different

+ Vocals during the choir’s ending

+ Doesn’t get interrupted in the middle by the message “this is a mostlymusic preview.” :)

–Would have loved to hear a child vocalist on this