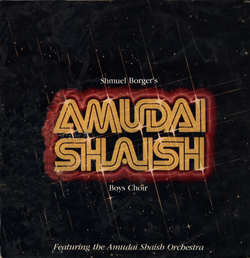 Listening to the Lev Tahor albums for an earlier review, I was pleased to see that some of the songs used came from Amudai Shaish.  I am guessing that many of you have never even heard of Amudai Shaish as their albums were released quite some time ago.  I have said it before and I will say it again.  There is quality music to be found on some of these older albums, which in some cases, are well worth a listen.  When I finished reviewing Lev Tahor, I promised myself I was going to try to find some time to review one of my favorites from years ago – Amudai Shaish’s double album.

One of the first thing that struck me when I pulled out the two record set was that so much has changed in the past thirty years.  The album cover itself is actually quite nice for something that was released that long ago.  In fact, the first Amudai Shaish album, which was released approximately 1977 had quite a memorable cover: purple, with the choir boys wearing yellow t-shirts.  Each shirt had one black letter on it and the entire choir combined spelled out the words “Amudai Shaish”.  Presumably the guy in the gorilla costume standing behind the choir is  choir director Shmuel Borger.  Yes, you read that right.  Gorilla costume.

Back to Amudai Shaish 2.  I wasn’t quite sure what year the album was released and nowhere on the cover does it provide that information.  In fact, it seems like everything was much simpler back in the late 70’s.  The Amudai Shaish Orchestra, which provides the instrumentation, was conducted by Yisroel Lamm, who also did all of the arrangements.  While most of the sixteen songs were composed by Shmuel Borger, there are contributions by some notable composers: Yossi Green, Shmuel Brazil and Moshe Laufer.  Adult soloists on this album are Ali Scharf and Rivi Schwebel and there are two familiar voices: Shloime Dachs and soloist Yisroel Meir Shapiro of Acheinu.  If you really want a laugh, check out the choir pictures inside the album.  The costumes and the glasses are really good for a laugh.

As for the music, this is a solid album with a number of truly excellent songs, with very nice harmonies.  The unnaturally high keys that are present on many of today’s boys choir albums are notably absent here.

L’shana Habaa, Yivarech and Yibane are all upbeat songs that in my mind have always struck me as being similar, though clearly not just variations on the same song.  Ata Echad, Al HaNissim and Seu Shearim are also energetic songs that are perfectly fine and very representative of 1970’s Jewish music.  Va’ani is one of those songs that falls into that middle ground.  I wouldn’t classify it as either fast or slow but all the same, I like it.

There are two niggunim on AS2:  the leibidic Shmueli’s Niggun and Yustle 2 (the original Yustle was on the first Amudai Shaish album.  The name “Yustle” is a takeoff on The Hustle, which was popular in the 70’s).  Both The Yustle and Yustle 2 are just as good now as they were when they were released.

Among the slow songs Hinei, Achas Shoalti and Racheim B’chasdecha are all very singable and nicely done and the classic Bilvavi is also featured on this album.  The standout slow song on this album has to be Yossi Green’s Al Eileh, which is truly beautiful.

There is no question that the most popular song on this album is Boruch Hegever, a 50’s style song, which was truly groundbreaking at the time and is still being sung today.  At a time when Jewish music seemed to stick to very strict guidelines, this song defied convention and was just plain fun.

The album ends with a fast “Ki V’simcha Satzayun”, lyrics that were used frequently in the 1970’s and seemed to have dropped off the face of the earth these days.

All in all, this is one of my favorite oldies.  If you can get your hands on a copy, it is well worth a listen.