Reprinted from the Country Yossi Magazine

He took the Jewish music world by storm in March of 2006, boldly using his own name as the title track of his debut album, Legabay. It was one of the most respectable debut albums in recent memory, and has defied convention in so many ways. The Jewish music world held its breath two years later, wondering if Dovid could possibly top his previous success. His second album, Omar Dovid, a musical masterpiece, did not disappoint. Every detail arranged to perfection, each one showcasing Dovid’s tremendous vocal abilities. It raised the bar in Jewish music with the winning combination of well chosen songs, great vocals and top notch production. And now, almost two and a half years later, as we find ourselves eagerly anticipating the next volume in Dovid Gabay’s musical trilogy, Dovid is taking things to the next level, as he takes on the role of Producer for his third album, Eretz Yisroel.

Dovid has achieved what many young, aspiring singers hope to in that he has risen quite rapidly up the ranks to be recognized as a member of Jewish music’s elite performers. Unlike many other Jewish singers, Dovid had no musical aspirations as a child and never sang with any choirs. After his Bar Mitzvah, Dovid began layning and davening for the amud, discovering that not only did he have an aptitude for both but that he enjoyed the experience immensely. He taught himself to play the keyboard in high school and took up music as a serious hobby, immersing himself in the music of Avraham Fried, Mordechai Ben David and R’ Shlomo Carlebach. Eventually, Dovid became a professional keyboard player. And while he has never accompanied himself at any of his previous performances, it is something he is contemplating doing in the future.

After five years of singing at simchos, Dovid began the process of working on his debut album, hooking up with some of the best talent in the industry. His first appearance was on Gideon Levine’s Best of the Best in 2002, followed by Sameach at the Wheel in 2003. In the next three years, Dovid built up a following as a wedding singer and by the time LeGabay was released in March of 2006, Sameach Music, distributor of the album, was being inundated with calls from Gabay fans, wanting to know when the long awaited album was finally going to be released.

LeGabay was an instant success and Jewish music fans couldn’t get enough of Dovid’s smooth, silky voice. The title track itself was a smash hit, but there were other strong songs on the album as well. Av Harachamim, a stunning ballad, was a crowd favorite and Havi’i was so good no one cared that it clocked in at an astonishing nine minutes and sixteen seconds. Dovid found himself busier than ever and even though he was hard at work on his second album, he still found time to record vocals for R’ Shmuel Brazil’s “Ki Ata Imadi” and the Harei Yehuda album in addition to appearing in Miami 29, Chazak 11, and the very prestigious surprise guest appearance at the HASC 20 concert.

March 2008 brought Omar Dovid, one of Jewish music’s all time best-selling albums. Everything about this album was done right and it firmly cemented Dovid’s place in the upper echelons of the Jewish music world. Featuring an eclectic mix of songs ranging from the hit song Hagomel to the magnificent Birchos Avicha to the Middle Eastern hora Nagilah and the soulful Omar Dovid. In an unusual twist, the song “The Letter” so inspired one listener, the father of a sick boy, that he founded davenforme.org. A website which pairs people up to daven for each other. Dovid graciously allowed davenforme.org to send a copy of the song to everyone who enrolls. The site currently has over 4,000 active members. The founder of the website, whose son experienced a complete recovery, says simply of Dovid, “He changed my life forever.”

Dovid’s life was forever altered by the success of Omar Dovid as well. No longer just an up and coming talent, he was now a full-fledged star and hotter than ever, racking up the frequent flyer miles as he circled the globe performing in Brazil, Switzerland, Paris, London, Geneva and, of course, Eretz Yisroel. Concert offers rolled in fast and furious and Dovid appeared in Chazak 12, the Achdut Concert in Yerushalayim, the YU Chanukah concert and the Toronto NCSY concert. Dovid also guest starred on “Hu Levado”, an album released in the Mishpacha magazine, and sang the stunning K’Shoshana on Acheinu Volume 3.

As 2008 rolled into 2009, Dovid was busier than ever, appearing at HASC 22, COLlive’s Birthday Bash, Kumzing DVD, YBC Live Succos ’09 and the Oorah Chanukah concert, in addition to headlining Chazak 13. Meanwhile, Dovid was hard at work in the recording studio, recording vocals for “Avodas Tzedaka” and working on his brand new release “Eretz Yisroel”. This past year, Dovid has been on stage yet again, singing in France at the Concert a Paris, Chai Lifeline Purimusic 2010, the 7th Annual Concert on the Lawn, and once again headlining the annual Shabbos Nachamu Chazak 14 concert. Dovid also guest starred on “A.K.A Pella Platinum”, taking on Mordechai Ben David’s formidable “B’Inyan Hasimcha” with great success.

“Boruch Hashem, Dovid has been blessed with a very keen sense of what to do and not to do musically. His G-d given hadracha makes a huge difference in his approach to his albums, how he goes about choosing songs, and the millions of details and decisions that go into each song. In listening to his vocal takes, he was an absolute perfectionist. His suggestions for how our vocals could complement his, helped me realize that he really knew how a track should sound. Most importantly, he’s a huge mentsh and a very ehrlich person who really cares about people.”

Deciding to use the experience and knowledge acquired in the course of his very successful career, Dovid donned the Producer’s hat for his latest project, putting together an album he calls his most “original and innovative project to date”. He worked with the composers and arrangers to bring out the best in every song putting together what Dovid calls “the best album I have ever done.”

Elimelech Blumstein, who has written several songs for Dovid, had the distinct honor of composing the title track for this album. “As a composer, working with Dovid is very rewarding because he brings out the best in me,” said Blumstein. “He is extremely selective when it comes to choosing material. He knows what he wants and he would direct me, pointing out what he did and didn’t like until the song was perfect.” Composer Baruch Levine described Dovid simply as, “a pleasure to work with and a real mentsh.”

When it came time to select a name for the album, Dovid didn’t hesitate. Having been to Eretz Yisroel numerous times in the past two years, he found himself falling in love with the country. Calling the album “Eretz Yisroel” was the obvious choice. “The kedusha of the land is unbelievable,” said Dovid. “Just breathing in the air and seeing some of the holiest places in the world is a very humbling experience.”

The exciting cover, designed by Sruly Meyer, manages to capture both the energy and the splendor of Eretz Yisroel, a prelude in and of itself to the music inside the striking case. “We wanted to convey the excitement and love of Eretz Yisroel – the whole land, not just the kosel,” said Meyer. “We wanted the images, both musical and graphic, to create a longing for Eretz Yisroel, an urge to be there and share in its beauty and holiness.”

While Dovid’s fans are sure to embrace his latest effort, Sameach Music, distributor of “Eretz Yisroel”, has no doubt that this album is sure to be a big hit. Benny Taubenfeld of Sameach Music spoke about Dovid’s long standing relationship with Sameach.

“Dovid has been a pleasure to work with ever since we released his first album “LeGabay” in March of 2006 which took the Jewish music scene by storm and has since become one of our all time best sellers. What impresses me most about Dovid is the versatility and range of his voice as well as the great songs he always manages to incorporate into his recordings. For example, the title track of his debut CD, “LeGabay,” was such a breath of fresh air in Jewish music that it raised the bar for all other artists in the business. His follow-up recording, “Omar Dovid,” is my personal favorite to date – especially the tracks “Omar Dovid,” “Birchas Avicha” and “Rachem.” His latest CD, “Eretz Yisroel,” proves beyond any doubt that you cannot rest on your laurels just because you’re a “success.” Dovid has, once again, shown me as well as his listening audience that there are no limits to how much better Jewish music can get.”

Each song seems to have its own distinct flavor and there is something for everyone here. Dovid’s versatile vocals brings out the beauty in every song. There are numerous musical styles represented on this album, with Dovid slipping effortlessly from one genre to the next. Even the lyrics are varied, ranging from Hebrew to English to Yiddish to French. This album has a decidedly upbeat feel to it, as it opens with the energetic Eretz Yisroel and continues with the disco B’simcha. The slower songs, Adon Olam, Bein HaUlam and Raza D’Shabbos, demonstrate that while Dovid is one of today’s top entertainers, he is equally adept at hartzige slow songs. Mi Sheberach, another opportunity for Dovid to cleverly work his name into a song, and Vehu Yishlach both have the potential to hit it big on the wedding circuit. Berum Olam, which defies convention by originally incorporating an authentic Irish arrangement, with bagpipes and all, may well be the hit of the album, while Yom Zeh Mechubad, has the nostalgic feel of yesteryear and could potentially be heard at Shabbos tables everywhere. The Sefardic Ha’aderet Veha’emunah, and Veyizku, a freilach song with lots of heart, round out this eagerly anticipated album.

His debut album, LeGabay, made us all realize that there is so much exciting, young talent out there, just waiting to be discovered. His second album, Omar Dovid, forever changed our expectations of what Jewish music should be. And with the release of his third album, Dovid Gabay hopes to redefine Jewish music yet again, as his music fills us all with the kedusha and beauty that is Eretz Yisroel.

Sandy Eller is a freelance writer who has written for various Jewish newspapers, magazines and websites in addition to having written song lyrics and scripts for several full scale productions. She can be contacted at sandyeller1@gmail.com. 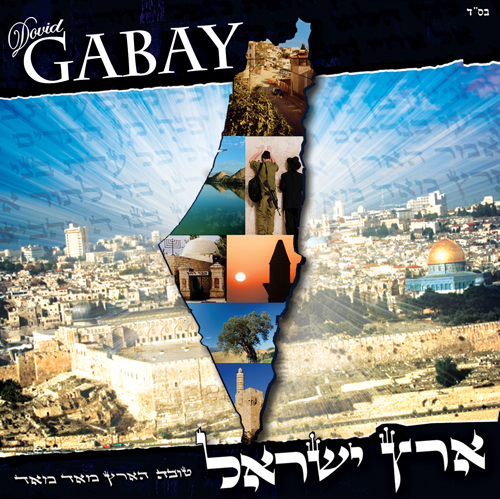