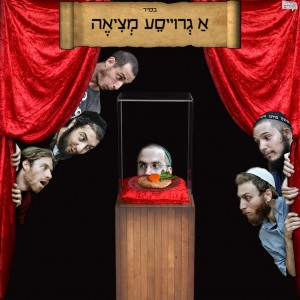 It’s a rarity when an album comes out that defies everything. The fact is, for the most part, a group or artist has some general direction that they flow in, and the fans have basic expectations.

Now, in no way do I pretend to speak for all the fans of the Israeli group A Groyse Metsie. But coming off their first (self-titled) album, which may be best described as “funk-rock-klezmer”, I don’t know that anyone could really have predicted their second album, just released a few weeks ago.

Its name starts things off. Hatnuah Leshichrur Hameyutar can loosely be translated as “The Movement Toward Unnecessary Freedom”; and that tongue-in-cheek vibe stays with you through the entire album. Shtick, however, does not an album make. And while there are plenty of moments of good humor (if you understand street Ivrit), the flat-out artistry and musicianship of this eclectic sextet is unbelievable.

You see, they’ve gone beyond genres. They call it “Gefilte Fish” – a sliced, diced and spiced combination of rock, hip-hop, klezmer, jazz, reggae, heavy metal, ska, and G-d-knows-what-else. These guys have simply created something that is truly and completely different; yet eminently enjoyable. And the lyrics? Wow. I’m not even going to comment on them, because they have to be heard to be appreciated.

Guitarist Nadav Bachar shared the album with me some 8 months ago. I loved it then, and it hasn’t lost its appeal since. Now that it’s finally available on the market, I’d like to share my thoughts on this creative stroke of genius. (Considering the fact that I was given the album via download so many months ago, I will simply follow the tracklist as it was given to me. I presume – and hope! – there have been no changes to the music.)

Sur Mera (****): We start with the funky intro – a warped violin, along with a guitar that sounds as if it is being replayed backwards. On my first listen, I thought something was wrong with the download! Then, the existential question (in English), “Where am I in all this?” as the violin clarifies itself and moves into a solo, which ends with some kind of comment like, “I’m right here… never … die!” Strange enough, I guess. And finally we move into the actual song.

Sur Mera starts off with a great groove; sweet vocals with some nice harmonizing. Split-second rhyming (in Ivrit – as is the overwhelming majority of the album) fits in with the solid clique of the instrumentalists. The guys put in gentle kicks throughout the song, including the pretty violin solo at 1:52, which segues into what seems to be the recording of a rabbi. The song ends where it started; same groove, which is a nice touch. Solid composition, solid execution, solid song.

(Check out their somewhat nutty, yet phenomenal, music video of this song here.)

Echad Elokeinu (*****): Again, a fun groove, followed with fun rhyming – following the lyrical style of “Who Knows One”, but moving upwards, and bringing in all sorts of humorous kabbalistic references. I haven’t the slightest clue how to classify this tune. Yet again, every one of the musicians finds the perfect way to add another dimension, with more musical surprises. At 2:07 they really pick it up, piling in lots of power and passion. The drums and percussion really excel in this song; but again, it’s all about the camaraderie of the band as they lead us on this extremely enjoyable journey.

Chofesh Hagadol (****): A step down from the power of the last song. This one starts off with some beatboxing in what begins as a folky-soft-rock-pop number, with a bit of electronica. Again, everything sounds great. They hit an 80’s style sci-fi solo at 2:47, which is backed up by some funky bass. That bass moves in to the end, moving into a specialized fade out – first vocals, then keyboard/violins/guitars, and ending the song with the bass and percussion, in a remarkably beautiful setup (though some would argue that they let the bass/percussion go on for too long. As for me? Each time I listen to it, it hits me one way or the other. So I have no real opinion one way or the other).

Ein Yeush (****): I’m pretty sure we haven’t had ska in Jewish music before. But here it is – a down-and-dirty ditty, with the positive from-Breslov-to-Jamaica message of “No worries, mon!” (A buddy of mine who is a DJ of a reggae radio program in Alaska got a kick out of playing this one out there.) Another entertaining listen – filled with some cool electronic fills and more awesome percussion.

Psycholog Mispar Echad (*****): Who knows what’s going on in the intro to this song?! Seems like scratching strings, but I’m really not sure. This song is another ska/reggae inspired piece. It starts off in a way that you have no idea where it’s going to go, but it really picks up steam as it progresses. Each section seems to add something else. But then, at 2:57, the guitars move into a warbled guitar solo that pulls itself out into a full power, full throttles down chorus, which really brings the song to its max. If you’re not moving your head violently by the end of the song, you must be British.

Eizehu Ashir (****): This classy number brings to the fore a bit of a bluesy feel. Snazzy violin-work amid the usual perfect vocals brings you to a guitar/violin duet at 2:30. More kudos to the sublime percussion, which seems to toss in just the right thing at the right time.

32 Netivot Chochma (****): The intro to this song sounds like it comes straight off an old klezmer album. But these guys wouldn’t do something typical, would they? And starting with the string-snap sound at :45, they really do this klezmer-inspired piece some funkiness. And you’ve gotta love the squeaky door as the song dies down. Another great song.

Ratzo Vashuv (****): The tune sounds like it came from a Chassidic nigun. But with some machine-gun heavy guitar playing and some electric violin, and astounding percussion, they really rock up what would be nothing more than cliché. They toss in a flute at 2:28 – which always makes me crave for some Avi Piamenta. That solo doesn’t move quite as far as I’d like it to. It sounds great nonetheless. Another inspired arrangement.

Ich Vaist Nisht (*****): A jazz/hip-hop/funk piece that is nothing short of brilliant. It features a perfect sax/violin duets between Daniel Zamir and Oren Tzor, alongside beautiful solos from Zamir, guitarist Bachar, and really funky piano liberally sprinkled in . Easily one of my favorite songs on the album – especially considering the ridiculous vocals going on throughout. And have I mentioned the drums and percussion yet? Wow.

Tzadik Gamur (*****): These guys just cannot open a song without an intro that has character oozing out of it! This one is a violin/mandolin duet that sounds like it slipped out of Ireland. But the rest of the song is a gorgeous clash of cultures. And starting at 2:57, the guys put out a serious (surprisingly enough), emotional musical message, topping off with a divine guitar solo. But they couldn’t resist ending it with a scratch up the frets, just for kicks.

14 Kislev (***): What more to call this than klezmer gone wild? This is the only instrumental number on this album. I don’t have any idea why it’s named 14 Kislev (the Lubavitcher Rebbe’s wedding anniversary?). With all the random sound effects and wackiness going on here, it’s impossible to take this song seriously. It’s still cool to listen to though, despite the fact that it’s the weakest link on the chain.

Matan Torah (*****): I really don’t care for heavy metal. But here, they really use the style to perfection – with no headache afterwards. This hilarious piece must be listened to, to be appreciated. The vocals are nothing short of brilliant. And the segue into a klezmerish chorus is so stark it makes your ear want to jump off your head. But it sounds so good! This kind of creativity makes me eager to sit in on their brainstorming sessions. How do they come UP with this stuff?!

Rabbi Nachman (*****): Finally, a pure reggae piece – featuring Fishy Hagadol (I think). This one is another laugher – a tongue-in-cheek kvetch of a Breslover from Pardes Chana trying to get to Uman for Rosh Hashana, with the requisite “Na Nach” tossed in somewhere. It fits perfectly into the genre. And, of course, it’s another serious head-bobber. (You can check out the song here.)

Five stars – without a doubt. This is simply the most colorful album ever to come out in Jewish music. The band is supremely talented. They’ve got a clear connection with each other; despite their various allegiances (a Lubavitcher, a Breslover, a Carlebachnik, a Dati Le’umi, and 2 Kibbutznikim – or something like that). It is very uncommon to hear a band with this kind of pure understanding of each other. Most bands follow the leader in a way that gets a bit monotonous. But this album is so varied you really don’t get there at all. It’s way out there – in terms of talent, lyrics, and sheer enjoyment. The studio work sets a standard for other groups to follow. And to be honest, I’ve tried to find areas that I can critique it, but I can’t – it’s simply that good.

Get a copy – 45 minutes of true musical pleasure. You can buy it here.

Check out some of the full songs, videos and live footage on their Myspace: http://www.myspace.com/groysemetsie, and on their website, www.groyse.com.

What an album! What a band!