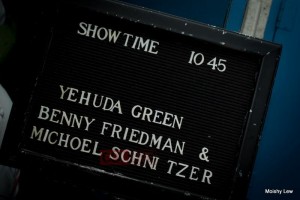 Hats off to Green Apple Productions for coming up with a stroke of genius – a series of Motzei Shabbos concerts in the mountains.  There is something about going up to the Catskills that makes you feel like a kid in camp again and what better part of camp to recreate for adults than night activity?  The concerts, featuring top name entertainment in the all new Kutsher’s Hotel, feature top notch entertainment in a relaxed atmosphere, recreating those great moments of your youth when summer was all about having a good time.

The first concert in the series was Shabbos Nachamu, featuring Moshav Band and Soul Farm.  Next week’s lineup features Shloime Gertner and 8th Day.  The final Shabbos of the summer season will feature Srully Williger singing at Kutsher’s as well, though this concert is not affiliated with Green Apple Productions.

Tonight’s concert (though by the time I write this, it is last night’s concert as the show didn’t end till 2:24 AM) was an all star night with performances from Michoel Schnitzler, Benny Friedman and Yehuda Green.  It was a truly awesome show and makes me hope that I will be up in the mountains next week so I can come back for the next one.  (Though my parents will probably shoot me.   More on that later.)

The concert, scheduled to start at 10:45 didn’t start till 11:15.  The nice couple sitting next to me (shout out – sorry don’t remember your names, but hope you enjoyed visiting day in Bnos!) seemed surprised that the concert started late, but I wasn’t.  I have yet to attend a concert that started on time.  The nightclub at Kutshers was a nice sized room and was probably about a third full by the time the concert started, though the room kept filling up as the night went on.

The emcee for the evening was introduced as someone named Eli.  I don’t think his last name was ever given.  No matter, he was fine, even without a last name.  The night began with a great jazz number from the Freilach orchestra who were really, really good.   A group of about twenty teenage boys from Machane Pnei Menachem walked in, cheering as they walked down the center aisle.  They were a source of entertainment for a large part of the evening, as they danced, cheered, did handstands, flips and other interesting moves, amid chants of “MPM!  MPM!”

Green Apple has done something really special here, giving the opening number to young unknowns who are looking to make a name for themselves.  The opener here was the duo of Hillel Kapnick and Boruch Naftel.  They were very energetic as they sang an original song.  Stay tuned for next week’s opening act, featuring Simcha Leiner.

The first major act of the evening was Michoel Schnitzler.  I confess I have never heard Schnitzler before and wasn’t sure how much I was going to enjoy him.  No worries.  Not only was Schnitzler an enjoyable singer, he was quite the entertainer, filling in between songs with one liners and amusing anecdotes, as he slipped between English Yiddish and even Hungarian.  The atmosphere the entire evening was quite relaxed, with a friend of Schnitzler’s walking up to the stage and shaking hands with him between songs.  He sang an assortment of songs including Carlebach’s Simcha L’artzecha, Ki Hirbeisa, Niggun Nevo and really had the crowd rocking as he sang MBD’s Omar Rabbi Akiva.

The stage went dark and the crowd was already screaming before rising superstar Benny Friedman came on stage, singing the title track from his hit album Taamu.  In fact, the crowd was so pumped that the six and a half foot tall, three hundred pound security guard came to the front to tell the campers to settle down.  Benny was really at the top of his game and by the time he finished Taamu the crowd was chanting “We love Benny!”  Benny was very at ease on stage, joking with the crowd, telling stories and dancing all over the stage.  Benny sang quite a few songs, including Avraham Fried’s A Gut Voch, No Lyrics/One Day medley, Emes, Yaavducha, L’tova and was joined onstage by Schnitzler for Rabos Machshavos and Kad Yasvun.  Watching Benny perform last night there is no doubt that while there are so many up and coming singers, Benny Friedman is well on his way to a long and illustrious career as one of the top names in Jewish music.

Next up, Yehuda Green, another crowd favorite.  I couldn’t even begin to list all the songs Green sang, given that he was on stage for so long.  Green took the stage at approximately 12:45 and stayed there until 2:25.  There were some in the audience who left due to the lateness of the hour, but there were just as many who stayed through Green’s whopping 100 minute set, (yes, you read that right!) where among other songs he sang something Havdala related (sorry, don’t know the name), V’Zocher, Hinei Yomim Baim, Shir Lamaalos, Return and Nishmas.  (Again, I may have gotten the names wrong, feel free to let me know!)

Benny Friedman joined Green back onstage for a Nishmas encore which was really excellent and I found Green even more enjoyable during their duet.  Hillel Kapnick and Baruch Naftel came back onstage for the finale, the four of them singing Hashiveinu until the lights finally came back on.  From the first opening notes, until the concert ended hours later, the Freilach Band really outdid themselves, with some outstanding work by guitar player Nachman Dreyer.

All in all it was a very enjoyable concert and if I am in the Catskills next week, I would love to come back and hear Shloime Gertner and 8th Day.  Having said that, it probably won’t happen.   Despite the fact that I am married with five kids, my parents, at whose house I was privileged to spend Shabbos, decided to wait up for me because they were worried about me driving back alone.  I don’t think I could make them worry like that two weeks in a row!  But I am guessing most of you won’t have anxious parents panicking because you are out so late.  If you are up in the mountains next Motzei Shabbos, make it your business to be at Kutsher’s  for another evening of great entertainment!