Spotlight on AKA Pella Platinum 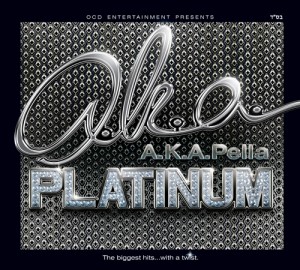 Anyone out there up for another AKA Pella Platinum review?

I know, this album came out in April, but with the three weeks going on now, it seemed to be a good time for me to finally get around to writing my review. If you are a regular reader of my posts, you will know that I don’t listen to music during Sefira, which is why I didn’t review this album when it first came out. Once Lag B’Omer rolled around and I could finally put on music, the first song I listened to was a track from AKA 4. (More on that later.) Suffice it to say that this album is so good, so realistic sounding, that we have been listening to it constantly since Lag B’Omer and no one in my family considers this CD to be a step down from regular music. It is just that good. CD Eichler and the boys really outdid themselves this time around and more than anything else, AKA 4 is tons of fun.

I am also going to respectfully request that we skip the comments saying “when are we going to see AKA Pella in concert?” It is not going to happen. These guys all have real lives and this is just something they do for fun. With Elie Ganz living in Israel, Avi Stewart in LA and Zevi Daniel and Dovi Ziffer in Baltimore, the odds of them ever all being in the same location are beyond miniscule.

As with any other AKA Pella album, this one has a theme, which is greatest hits of the past two years. It is accompanied by a nice sized booklet, with plenty to read, should you choose to do so. Clearly many people were involved in this project and CD Eichler takes the concept of hakaras hatov very seriously as he thanks the myriad of people who helped bring this project to fruition. One of the most interesting things I found in the booklet was a listing of runners up – great songs that came out within the past two years that were considered for this album, but for one reason or another weren’t used, including Window in Heaven (Shea Rubenstein), Ma Rabu and Boruch Hashem (Kol Noar Boys Choir), Birchos Avicha (Dovid Gabay), Sefor (The 8th Note), Anim Zemiros (Shloimy Daskal), Kulam Ahuvim and Omar R’ Akiva (Mordechai Ben David), Nishmas (Yehuda Green), Modim (Shloime Taussig), Binyan Adei Ad (Lipa), No Lyrics, Moshiach and LeTova (Benny Friedman) and Zeh LaZeh (Shloime Kaufman). This album is dedicated to the memory of Izzy Taubenfeld of Sameach music, who took a special interest in the AKA Pella albums in his lifetime.

By necessity, I am pretty much going to ignore most of the secular stuff that is mixed in to the songs, because quite frankly I don’t recognize most of it. I am sure there are some clever pairings here, but I am not familiar with most of it and am not qualified to offer my comments.

Finally, and most importantly, hats off to CD Eichler for crediting every song that was used on this album, be it Jewish music or secular. I would like to think that other artists who use or parody someone else’s music will follow in his footsteps and give proper credit when using someone else’s material.

Hentelach: Beri Weber joins AKA Pella for this wild song that is the perfect opener to this album that is so much fun I bet it has been banned by my daughter’s very right wing high school. I will admit it – I have nothing against Lipa’s Hentelach, but it didn’t blow me away. This version, with crazy harmonies and vocals by Mo Kiss blows the original out of the water and I am absolutely in love with it. I am not sure how I feel about the English lyrics that were added in but this song is such a winner for me that I have decided not to obsess over them.

Lmaancha/V’hoo Kayli: If you thought AKA Pella could only do shtick, you were sadly mistaken. This is classic a capella and it is very, very good. They keep the harmonies very simple on this song so that the beautify of this Eitan Katz song comes through loud and clear. Love the low harmonies that start at 0:50 and continue throughout the song. It’s funny how everyone goes nuts over high harmonies and being able to hit high notes, when it is the lows that give so much dimension to a song. The harmonies to Baruch Levine’s beautiful V’Hoo Kayli aren’t quite as strong, though again, there is a gorgeous low harmony running through the whole song. The harmonies start to dominate the song at 3:49 and I would have preferred if they had kept things less complicated and let the simplicity of the song shine through.

Ma Tamar: Mo Kiss doing what he does best with the title track from Yeedle’s Lev Echad album. Sorry guys, but I could have done without all the side stuff on this one. My kids know if they start singing about their abuelo and abuela they are in major trouble. Other than that, this song is very enjoyable and I hear it frequently on my kids’ CD players.

Yuffing Else Matters: The intro to this one sounds like a cross between Yerushalayim Shel Zahav and Chim Chiminey from Mary Poppins. This is a remake of Shalsheles’ Yofyafisa, the first of two times it appears on this album. I am sure there is some kind of “chap” to the title, but I just don’t get it. I lost interest in this song at about 3:53 when things veer into bizarro land and I have no clue what the English words are or why they are here.

Nilli Milli: Again, I don’t get the title, but that doesn’t make a difference. This remake of Shloime Gertner’s Im Ein Ani Li Mi Li is about the same as the original, plus a few AKA Pella-esque additions. I am still not sure how I feel about the choral piece at 3:53.

Anavim: While there is no question that Anavim has been sung ad infinitum, I think because V’hi Sheamda came out not too much later, Anavim never got to be truly annoying, at least not to me. The Exodus introduction is appropriate and their rendition of this classic is simple, clean and enjoyable.

Binyan HaSimcha: This one is a little tough for me. I couldn’t wait to hear Dovid Gabay singing my favorite song from Kulam Ahuvim. A voice like his? A song like this? What a combination. It was the first song I listened to after Sefira. And after all this time, I am still not sure how I feel about it. There is no question that Gabay has a gorgeous voice and may be the most qualified guy out there to take on this song, but I am not sure that this song is best served by a single voice, even with harmonies. Binyan Hasimcha is actually a very bizarre song that doesn’t necessarily stand on its own from a vocal standpoint. It is the way Mordechai Ben David and Aaron Razel play off each other, combined with the quirkiness of Razel’s vocals that make the original work so well on Kulam Ahuvim. Don’t get me wrong, I found this version of the song to be very enjoyable, just not as good as the original. Having said that, this is definitely another fun song, a perfect choice for this album and one that is frequently on repeat in our house. One other thought: I love the intro though I am not sure that all the effects that come in at 2:47 added anything to the song. Special thanks to AKA Pella for including the lyrics to this song in the booklet.

M’heira: This is one of the few songs where I recognize the intro because it is an oldie. This particular introduction, with original lyrics about camaraderie, seems like an unusual choice for a wedding song. This song is nicely done, but just wasn’t my favorite on the album.

Greatest Medley Ever: Let me just get this out of the way. If there is some kind of clever joke hidden in the twenty four second intro, I don’t get it and neither does anyone else I have spoken to. Having said that, wow!! I love this song, which is really saying something considering that while Shloime Daskal’s Poseach, MBD’s Usid and Shwekey’s Ma Ma Ma were all huge hits, I never really fell in love with any of them. Lots of noteworthy moments in this medley. I love both the introductions to both Poseach and Usid (at 0:31 and 2:09 respectively). The Thriller piece in Usid (3:46 – 4:44) is beyond inspired – it is wild, wacky, irreverent and absolutely fabulous. According to an article in The Jewish Star, CD Eichler spent a month looking for someone with just the right voice to record the spoken part (4:04 – 4:27) with no success. Ultimately Eichler found the right voice when he himself came down with a virus which deepened his voice and he recorded the vocals on his iPhone while sick at home. I also enjoyed the ending to Ma Ma Ma from 6:18 to the end, particularly at 6:41 where they split the word “mishkinosecha” into “mishkino kinosecha” a cute way to mix things up a little. Kudos to newcomer Simcha Leiner whose distinctive voice added character to this awesome medley.

V’hee Sheamda: Could there be an album of the greatest hits of the past two years without Yaaov Shwekey’s V’Hee Sheamda? I suppose not. It’s not that this isn’t a beautiful song and the vocals here are quite lovely, but I have heard it too often recently. Unless it is my kids singing it, I would just as soon pass.

Yavo: Another great song, though the “one, two, three, fo!” at the beginning is another part of this album that I NEVER want to hear my kids singing. Nice vocals, though this is apparently the mellow, laid back version of Yavo, which lacks the bounce and energy of the Miami version and every time I hear it I have to stifle the urge to give these guys some Red Bull so they can ratchet the tempo up a notch. I didn’t get the logic behind the spoken part at 3:28. It seemed like they were trying to be dramatic and serious and it just never works, especially not in a perky, feel good song like this one.

Sunshine in the Rain: As I never heard Shloime Kaufman’s Avodas Tzedaka album, this was my first opportunity to hear Sunshine in the Rain, which was composed for A Time. Does anyone else hear whispering in the background on this song or is it just me? A nice enough song that I’m sure is very meaningful to many people, with some very nice vocals.

Yufyafisa: I am probably the only person out there who wasn’t blown away by this song on Shalsheles 4 so I wasn’t too excited to see it appearing twice on this album, especially because for the first three minutes it seemed to just be rehashing the fourth track, just with the kids of Shalsheles Jr. singing instead of adults. But things got way more fun from 3:10 on and I found myself really enjoying the song.

Final words? Those of you who know me will appreciate just what a compliment it is when I say that of all the AKA Pella albums, I think this one is their best one yet!