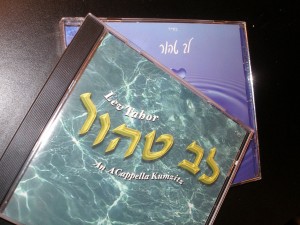 It is kind of embarrassing to admit that until last week, I had never listened to any of the four Lev Tahor albums.  Sure, I had heard some of their songs here and there, but I didn’t own any of their CDs.  With so many new albums being released every year, it isn’t practical to buy all of them.  But ever since the Shalsheles/Lev Tahor concert was announced for this past winter (though it was ultimately cancelled), listening to Lev Tahor has been on my to do list.

I had originally planned on doing one giant retrospective of all four albums, but when I realized just what a massive project that was, I decided to review each album separately.  Somehow, the summer seems to have crept up on me and with the three weeks just days away, I have moved on to plan c – review the first two albums now and the second two after the three weeks.

Lev Tahor is composed of Ari Cukier, Gadi Fuchs and Eli Schwebel. Motty Jacobowitz, who appeared on the first album only, left the group when the time constraints of real life left him unable to continue with the demands of recording an album.  Lev Tahor Volumes 1 and 3 are a capella albums, featuring remakes of some of great songs.  Lev Tahor Volumes 2 and 4 feature original songs, many written by Gadi Fuchs.  In the good news department, Lev Tahor 5 is currently in the pre-production stage.

Lev Tahor Volume 1, titled An A Cappella Kumzitz, was released in 2001 and is pretty much what I would consider an entry level album.  With the exception of Dido Bei, which was produced and arranged by Yehuda Kaplan who also does guest vocals, the entire album was produced and arranged by Lev Tahor themselves.  This album has no original songs, but has beautiful voices, some very nice vocals and excellent song selection to highlight this voices of this very talented group.  LT1 has ten songs including Avraham Fried’s Dido Bei, Yeedle’s Shiru Lamelech, Journey’s The Ninth Man, two Dveykus songs, Kol Achai’s Anim Zemiros, two songs from Amudai Shaish, a Rochel Miller song and a Shabbos Medley.  My personal favorite on the album was track number three, Mi Adir set to the beautiful Al Eileh from Amudai Shaish Volume 2.

Lev Tahor 2,  released in 2002, was produced by Lev Tahor, with arrangements by Leib Yaakov Rigler.  Although the booklet, which is much more substantive than the one that accompanied LT1,  mentions in two different places that the songs are composed by Gadi Fuchs,  the song by song actually lists other composers for three of the songs.  This album, which was released eighteen months after Lev Tahor’s debut album, feels tighter and fuller than the original, possibly because this isn’t an a capella album.  While it is obvious listening to LT 2 that this album was released at a time when production levels in Jewish music were very different, even eight years later, it is still very, very enjoyable.

Asher Bara:  This leibidic song, which first debuted at a Fuchs family wedding, starts off with a truly awesome string intro and keeps the energy level up all the way through this fun song.  I enjoyed it so much I was surprised that I have never heard this song played at a wedding.

Refa’einu:  One of the things I enjoyed about listening to Lev Tahor’s albums was realizing how many songs of theirs I already knew.  This pretty, slow song was recycled on AKA Pella 2 so it wasn’t new to me, but I enjoyed this original version with some truly stunning harmonies.

Lev Tahor:  Another great intro and  more great harmonies, though the song was a little busy for my taste.  Eli Schwebel lends a hand on the arrangements on this song.

Watch Over Me:  Oddly enough, there is something about this song reminds me of both Michoel Pruzansky’s You Are Watching Me and Sheves Chaverim’s Finally Here.  I don’t know, somehow I couldn’t quite get into this song.

Mah Yonah:  A fun song, with offbeat lyrics from Gemara Brachos, featuring, yet again, another breathtaking introduction.  The arrangements really add a lot to this song, which makes you want to get up and dance!

Modim:  Coming into the home stretch, this CD just gets better and better with three solid songs closing out the album.  The first, Modim, composed by Shloimy Weiss, is one of those great, feel good songs that you can’t help but sing along with.  The lyrics are a tight squeeze on the second part and it almost feels like there is a beat missing somewhere between “sha’ata hu” and “ki mayolam”.  Kudos to Lev Tahor for correctly pronouncing the word “sha’ata” which more often than not is mispronounced “she’ata”.

Acheinu:  A pretty slow song by David Scharf.  Second part is gorgeous and feels very Shalsheles-y.  Terrific vocals by Eli Schwebel who has obviously inherited his father’s very distinctive voice.  Love the a capella bit at 3:40.

Horachaman Hanikdash:  Everybody up and dance again!  This ebullient song just works and leaves you on such a high that you just want to hit play and start the whole album again from the beginning.