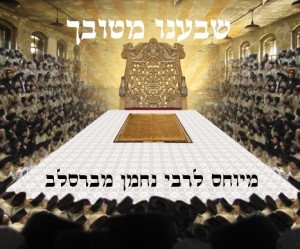 A lost nigun composed by Rebbe Nachman of Breslev, which was recently miraculously discovered in an archive in the Ukraine, led to the creation of an exciting new album of ancient Breslev nigunnim, sung in the days of Rebbe Nachman. Amid the collection of lost nigunnim found about a year and a half ago in a remote archive in the Ukraine, a special nigun was found, recorded in 1913. A recording and notes for this nigun were discovered in this important finding, and next to them, written in Yiddish, were the words, “The nigun that leads the Tzaddikim to heaven, as taught by Rebbe Nachman”.

Opening the events commemorating two-hundred years since the passing of Rebbe Nachman of Breslev, Hindik Productions is about to release an album of songs and nigunnim composed by Rebbe Nachman, produced by the famous arranger, R’ Dudi Kalish. The album will feature the lost nigun along with other ancient original songs and nigunnim, attributed to Rebbe Nachman, selected from the many nigunnim found by the explorer Nachum Kralinsky in an archive in Kiev. A lot was invested in this production, expertly directed by the famous arranger of the Belz Hassidism, R’ Dudi Kalish, with hundreds of violinists and musicians, bringing life into the ancient-new niguns.

The album’s highlight is “The Nigun that Accompanies the Tzaddikim to Heaven”, an ancient nigun which according to Rebbe Nachman, accompanies the Tzaddikim on their way to heaven. Not until recently was this nigun found. The excited Karlinsky showed the notes of the niguns to the elders of the Breslev Hassidism, some of the niguns he sang to them himself. They were not familiar with all of them; some were totally new. There were nigunnim which were lost with time and with the crumbling of the Jewish communities after the wars and revolutions in Europe, lost and forgotten. The new album brings them back to life from the depths of oblivion.

“Sab’einu Mituvecha” – a harbinger from the new album, to be released, G-d willing, towards the coming Rosh HaShana, distributed by Hindik Productions, of course. R’ Ya’akov Melamed (Kalmanovitz) z”l told that in his youth, he heard the elders of the Breslev Hassidism say more than a hundred years ago, that the nigun was sung in Rebbe Nachman’s holy court, while he was still alive and they would sing the words “Shabbat Kodshecha” twice: once in honor of the holy Sabbath and once in honor of Rebbe Nachman.