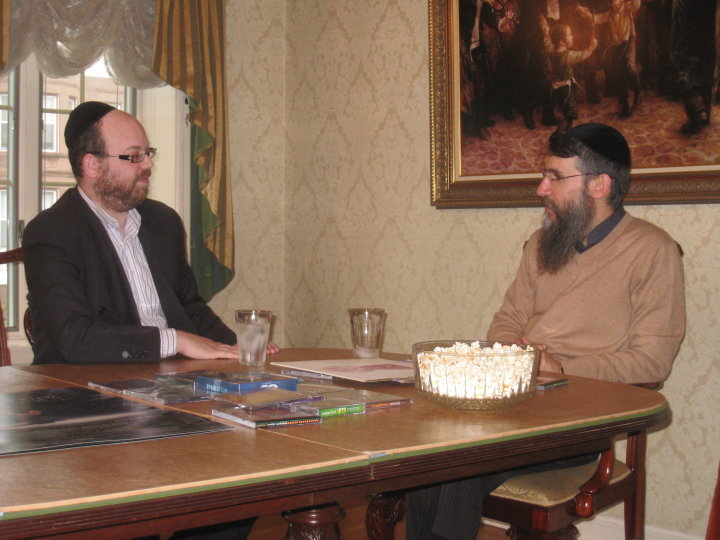 New York –  Lag B’omer marks the thirtieth anniversary of the release of Avraham Fried’s debut album, No Jew Will Be Left Behind. To celebrate this milestone, Yossi Zweig spoke with the Jewish music superstar, who spoke candidly about his career, his music and his plans for the future. Vos Iz Neias is proud to present an exclusive three part video interview, providing a glimpse into the world of one of Jewish music’s most successful singers.

In the first of this three part series, Avremel reminisces how his first instructions from the Lubavitcher Rebbe about his singing career were to include the words “Please do not play on Shabbos or Yom Tov” on both the album cover and the album itself. The title track of his debut album, No Jew Will Be Left Behind, is the first of many Moshiach themed songs that appear on Fried’s albums. Indeed, thirty years later, some of these songs are still popular and Fried points out that the hallmark of a hit song isn’t the song’s popularity when it is released, but that years later, people are still singing that song.

While he has certainly kept up with the trend in Jewish music to incorporate elaborate orchestration into every album, Fried confesses that he would love to see music downsized with a return to simpler days when an eight piece orchestra was more than enough. Fried discusses his early days, working with Sheya Mendlowitz and his long standing relationship with multi talented arranger Moshe Laufer who has been arranging his albums since 1983.

While Avremel has been delighting us with his albums since 1980, his singing career actually goes back much further. Both his Hupp Cossak and Goodbye Golus albums feature recordings of him singing as child.

Part 1 of the exclusive interview

Brooklyn, NY – While Avraham Fried has released over thirty albums, in this second segment of the video interview celebrating his thirtieth anniversary in the music business, he recalls his earliest days as a child singer. His first audience, perhaps, was his next door neighbor, the wife of the Alter Rebbe, who used to ask the five year old Avremel to sing for her. He went on to sing on Amudai Shaish, Sdei Chemed and a Suki and Ding wedding album.

It is clear that much has changed in the past thirty years, and Fried describes how Jewish music has evolved over that time, going from the typical Chassidic sound of the 80’s to the vast array of styles that are around today. While Fried seems very comfortable embracing the new sounds and performers that make up the Jewish music scene today, including his nephews, 8th Day and Benny Friedman, he clearly has very strong feeling on the subject of performers using secular music on their albums. Taking a strong stance on a controversial topic, Fried unequivocally states that, in his opinion, attempting to kasher secular music by using Jewish words is wrong and not something he ever plans to do.

While Mordechai Ben David may have been the one to inspire Avraham Fried to become a singer, it is clear that he has found his own niche in Jewish music. Aside from a long list of Moshiach-themed songs, some hopeful and upbeat, some poignant and heartfelt, “pieces” like Tanya and Aderaba are among his biggest hits. Despite his mission to entertain and inspire Klal Yisroel, Fried has a special place in his heart for songs that were made popular by other singers that have clearly inspired him.

In a very rare opportunity, Avraham Fried offers the listening public the chance to shape the future of Jewish music, asking VIN readers to give him feedback so that he has a better idea of what his fans want to hear, promising to read the comments on this post and, if possible, respond to them.

Brooklyn, NY – Our exclusive three part video interview with Avraham Fried concludes with Avremel discussing his father’s reaction to his becoming a singer and his thoughts on having his own children, who have been featured on a few of his CDs, follow in his footsteps. Fried seems humbled by his success, which has taken him all over the world, and is perhaps the only Jewish singer who has ever sung in a Las Vegas showroom. He marvels at the notion that he has been given the privilege to inspire people and is clearly grateful that he has been given this amazing opportunity.

After releasing his first DVD last year, Fried confesses to wanting to do another. Looking ahead to the future, Fried is hard at work on both a conventional album and a Yiddish/English album. As a final treat for Vos Iz Neias readers, Fried offers just a taste of a song from his upcoming album, which is due out this Tishrei.