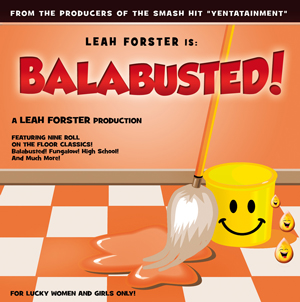 Never having heard a frum comedy CD before, I wasn’t quite sure what to expect when I got a copy of Leah Forster’s Balabusted.  Just from the title, I was a little concerned that it would be stereotypical frum humor, geared toward women.

First of all, all you guys out there, you might as well stop reading right now.  You can’t listen to this CD and you won’t get the jokes anyway.  This is definitely girls only humor and you just won’t appreciate it.  I received this album on a day when I was in a really bad mood.  While I didn’t love the entire CD, it definitely managed to put a smile on my face, quite a feat considering the day that I was having.

Leah Forster is clearly very talented and while I don’t think Yaakov Shwekey or Dovid Gabay have anything to fear from her in the vocals department, her spoken comedy bits were very, very funny.  The humor vacillated between dead on observations about various situations to segments that to me were a little stereotypical.  All in all, this was a fun CD and especially during this time of year when any female who is making Pesach is stressed out to the max, this album was a welcome diversion from thoughts of cooking and cleaning.

The booklet is another Sruly Meyer project and as usual, his artwork captures the essence of this album:  fun, upbeat, but doesn’t take itself too seriously.  I know that this was a low budget production, but as a writer, I have no tolerance for bad spelling in an album insert.  Last I checked, it didn’t cost any more to spell words correctly, capitalize words appropriately and use proper punctuation.  And it took me a while to notice that while the album insert boasts nine songs, there are only seven listed in the booklet.  That’s right, two songs (and their lyrics) are missing completely.  Anyone out there want to hire an editor?  If so, drop me a line.

Balabusted – This was one of the songs with lyrics that were a little typical.  While I can relate to the concept of the overworked mother trying to get everything right, I have trouble feeling sympathy for someone whose main issue seems to be what labels are on her clothes.   I thought being a balabusta was about running a house, getting food on the table and making sure your kids have socks that are not only clean but that actually match each other.  If I have to worry about Prada shoes I am a failure as a balabusta.   Still, the song was cute, if not my favorite.

Sheitel Macher – This song was one of the songs that starts off with a comedy sketch.  I loved the contrast between the oh so frum mother who wants a very yeshivish looking sheitel and her daughter the kallah who wants a sheitel that is exactly like her hair.  Forster does a great job with the different voices as she does throughout the CD.  The song lyrics weren’t as funny as the spoken part that preceded the song, but she managed to capture the essence of the ditzy kallah who thinks if she gets the right sheitel her life will be perfect.

Shadchan – Another comedy bit up front that was hysterically funny.  Forster really nailed the ridiculous questions mothers of boys sometimes ask about girls – is she a thin size 2 or a chubby size 2?  Just priceless.  One of the best songs on the album.

Skip Pesach At The Hotel – I’m sorry…she can afford to go to a hotel for Pesach but decides to stay home and do all the work because she doesn’t want to deal with buying clothing?  What is the matter with this woman?  Will trade shopping for the cooking/cleaning marathon any day!

High School – Again, another winner, with a fabulous comedy bit up front that really captures the girls high school experience.  The music on this song really fits the lyrics, which hit the mark as well.  Definitely one of my favorites.

Fungalow In My Bungalow – I am guessing that Forster captured the essence of the bungalow experience, something I haven’t experienced since I was five.  Why anyone would spend $10,000 to live in sub human conditions is beyond me.  But people do it every year, so there must be some redeeming value though I can’t imagine what they are.

The Camp Song – I have no clue what the real name of this song is as this one is missing completely from the booklet.  How can a song be missing from the booklet? While I think Forster did a great job capturing the overly perky atmosphere of a girls camp, (“everybody run, run to the Raananiya!!!!!”), the song itself was nowhere near as good as the intro.  The premise of the song, about a girl complaining how much she hates camp, but changes her mind when it comes to canteen rang a little hollow for me.

The Song That Doesn’t Belong On This CD – Forgive me for giving  this song such a bizarre name, but once again, another song on the album that doesn’t exist in the booklet.  As for the song, I have no clue what this song is doing on a comedy album.  It is about a high school girl who mouths off to a substitute and a dozen years later, finds herself still single, until she has a chance encounter with the same substitute.  She finds out that one careless comment turned the substitute off to teaching forever and as soon as she apologizes, she magically meets the right boy and gets engaged six weeks later.   A lovely story for a Bais Yaakov principal to tell the girls at an assembly.  What is it doing on a comedy CD?