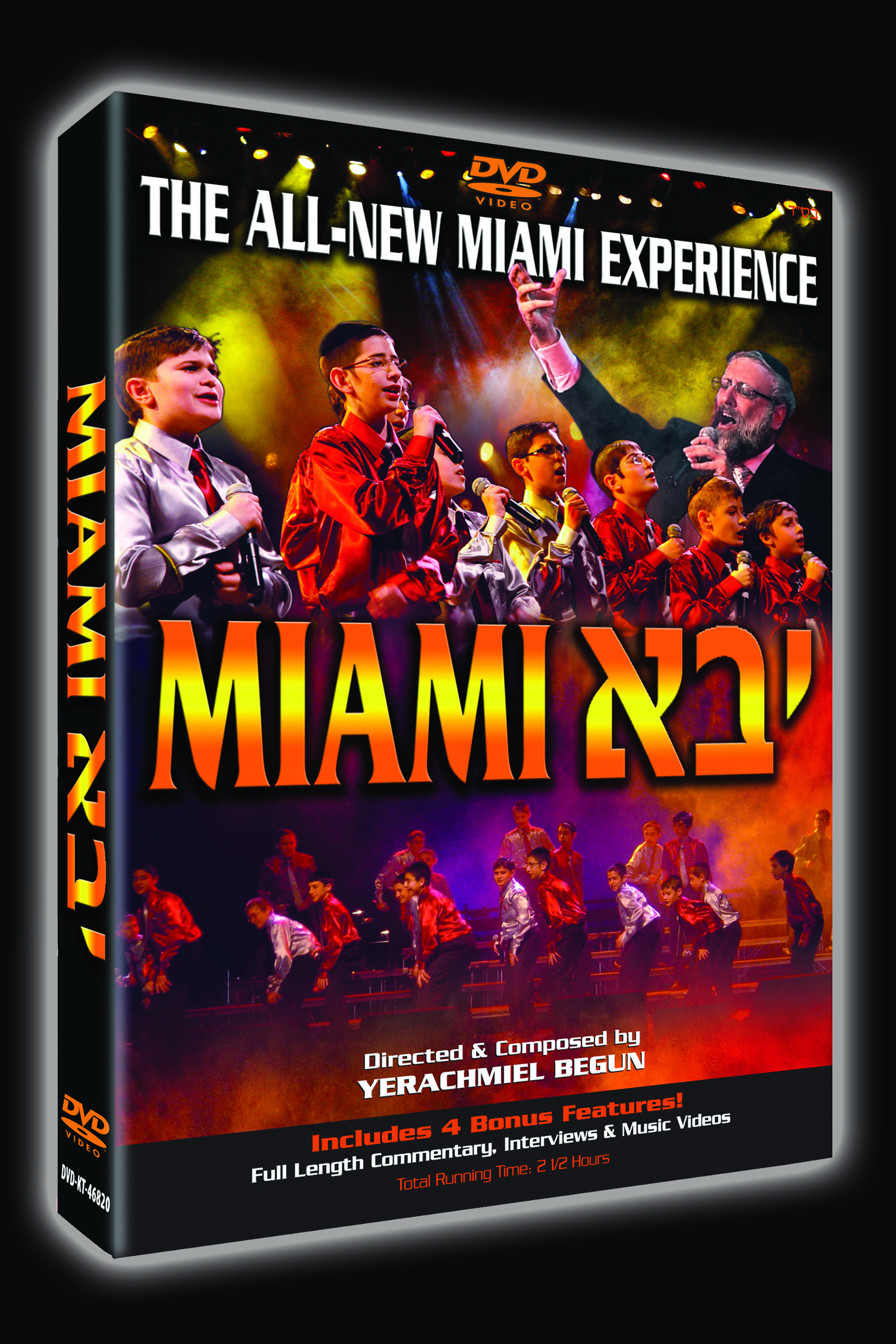 With the newest Miami Experience just a few short weeks away, it seemed like a good time to revisit last year’s Miami Experience, by watching the Miami Yavoh DVD which was released just before Chanukah.  The DVD is divided into four separate parts:  the concert segment, music videos, interviews  and the same concert segment repeated, this time with a full length commentary by Yerachmiel Begun and some special guests.

The concert segment combines the best parts of the Pesach and Succos Miami concerts.   Since there is no point in repeating reviews that have already been written on this website, I am not going to go through the concert song by song.  To read the review of the Pesach concert by JM Derech, click here. For the Succos concert review, click here.

Given that I was actually at the Succos concert, it was fun trying to place which parts of the video were from which concert.   The clips are blended together so smoothly that except for moments where the boys are standing and then magically sitting, it is difficult to remember that what you are watching is actually a combination of two different events, filmed six months apart.

A few comments that I feel compelled to make:

1)   Wow, these boys are good.  It is amazing how they perform at least three quarters of the concert onstage, alone, with no one leading the choir.  Their professionalism carries through in their dancing and their costumes.  No one would ever confuse Miami Boys Choir with a random choir from your son’s elementary school.  They look, sound and appear very professional.  Having said that, someone needs to decide how to spell the title song and the name of the concert.  The CD itself was titled “Yovo”.  On the CD, the title song was spelled “Yovoh”.  On the DVD, the song is spelled “Yavoh”.

2) Both the audio and the video on this DVD are great.  In fact, having been at one of the concerts, I will tell you that you will see the actual concert far better on this DVD than you ever will at a concert hall.  Of course, you can’t compare the experience of a live concert with watching a DVD in your family room, but if you really want to see the kids, the DVD gives you a better view than the actual concert.   You will be able to count every freckle on the faces of the boys, should you feel a bizarre compulsion to do so.

3) In a nutshell?  This DVD combines two great concerts into one great video.  The concert portion is only an hour long, but that’s why  bonus features were invented.

There are two music videos on this DVD.  The first is the studio version of Me’im Hashem, videotaped in June 2008 at the recording studio.  After seeing these boys on stage in sequins and shiny shirts, it is almost a relief to see them dressed like regular kids:  t-shirts, polo shirts and their tzitzis hanging out.  A great song and I enjoyed seeing it/hearing it again, though it was pretty much just  footage of the boys either wearing headphones as they recorded or practicing the same choreography that you see on stage.  I don’t know that the vocals here aren’t straight off the original CD.  Once again, can we decide on one spelling for a song and stick with it?  This time around, the song is titled “Mayim Hashem”.

The other music video is Miami 30, showcasing 30 years of Miami Boys Choir albums, set to the song Moshiach.  The video features graphics showing different years Miami albums were released, magazine and front pages of newspapers showing what was going on in the world during those times, shots of the choir performing at various concerts, all interspersed with current choir members asking “are you ready?”

Israeli radio personality Menachem Toker interviews choir members Shmuli Broyn, Ari Rosner, Menachem Sammel and Laibel Gordon.  Interestingly enough, not one of these boys actually sings anywhere on this DVD.  This group of boys is from Miami Revach, but the interview is still entertaining enough, with Toker asking the boys how it feels to be onstage, if they feel their choir experience has helped them in school and how they feel about the reality that their voices will change and they will have to leave the choir.

This is an hour long, full length running commentary on the concert.  As you watch the concert again, you hear discussions between Yerachmiel Begun and various people who pop in during his commentary:  former choir member Menachem Klein, Yoeli Kar, his son Chananya and a few choir boys: Yair Kenig, Yoshi Bender and the Ayal brothers:  David, Sol and Albert.  It is nice to hear the easy banter between Begun and the boys.  While the casual listener won’t really be all that interested in hearing Begun discuss carpool arrangements with Mrs. Bender, devoted Miami fans will eat up the assorted bits of trivia that come out during the commentary.

If you have music loving kids, concert DVDs are a terrific innovation.  Not only can your entire family see a concert for approximately $25, but they will get a better view of the stage than at a live concert and be able to watch the concert as many times as their little hearts desire.  Bonus features makes these DVDs even more appealing.

This DVD in particular is a little on the short side as the live concerts feature performers other than just the boys choir.  While the cover boasts a running time of 2 ½ hours, that is only if you watch the concert twice:  once with the commentary and once without.  The bonus features aren’t quite as full or as entertaining as the ones on Miami Revach, but I thought the DVD was a worthwhile investment for my crew, hardcore Miami fans.   Can’t wait to see what Yerachmiel Begun has up his sleeve for this year’s Miami Experience!