NEW music in the works!

Updated in red below

My sources are telling me many albums are in the works.

After winning the 2008 Oorah auditions, Yisroel Werdyger’s second album is in the making.

Teem Productions, headed by Yossi Tyberg and Gershy Moskowitz, who propelled Yisroel to stardom with Bayis Ne’eman Beyisroel, will be producing this project as well, with musical arrangements by Shua Fried.

Much thought and research went into the selection of songs, with several compositions by the talented Yossi Green, and several by Yitzy Waldner. Motty Ilowitz, composer of the title track on Yisroel’s last album, which has become as staple at chasunos everywhere, also lends his talents to this project. Other contributors include Pinky Weber, Meshulem Greenberger, Chaim Elya Hartman, and even some new composers who hope to make their mark on the Jewish music scene.

Dovid Gabay’s 3rd album song selection process is close to completion. No estimate on when it’s going to be released has been given yet. Gabay’s professional recording career started with his first album “Legabay“, produced by Avi Newmark. That same year he was featured on R’ Shmuel Brazil’s “Ki Atah Imadi“. He then made guest appearances on Oorah’s annual CD’s & “Harei Yehuda“. Up next was Gabay’s next hit album entitled “Omar Dovid“, which hit the Jewish music scene by storm, featuring the hit song “Hagomel”, sung by Jewish weddings everywhere. Two more guest appearances followed on Acheinu 3 & Shloime Kaufman’s “Avodas Tzedaka” album and finally he was the focal point of the “Kumzing” concert. By no means is Gabay’s career slowing down. He’s constantly featured in concerts such as HASC and his new album, produced on his own, promises to be another smashing hit. 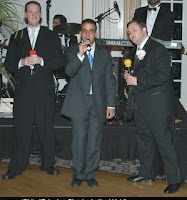 Menucha 2… When is it coming out? Everyone wants to know. Menucha started out with the first album way back in 2003. That’s 7 years and their first album is still a hit. On YBC Live 3, a new Menucha song entitled “Shiru Lashem” was featured. It sounded great, like the old Menucha we know and love.

The group features 3 men by the names of Danny Berkowitz, Avi Shachter and Shlomo Schwed. The first album had Doniel Waldman on it, but he has since left the group. It’s amazing to see that the remaining 3 guys have stuck together for so long without putting out an album. Eli Gerstner told me that Menucha 2 is due out Purim. That’s less than a month away. Let’s just wait and see :).

Aryeh Kunstler, everyone’s favorite Jewish rocker is expected to release his new album any day now and it’s promised to be a hit like his first album “From the Depths“. Aryeh started out with V’havienu, a group with his brother Dani. He then proceeded to join Yaakov Chesed and released two albums with them as a guitarist and vocalist. Finally he released a single entitled “Yisrael B’tach Bashem” with Yossi Piamenta and was featured on Gershon Veroba’s latest album “Second Impressions“.

Aryeh has been seen everywhere, from opening for Moshav Band and singing with the Yeshiva Boys Choir. He know can be seen on a constant basis playing for the Neshoma Orchestra as a lead guitarist/vocalist.

Yacov Young is known for his sweet yet powerful voice. Very underrated and a bliss to the ears. His debut album “Yogati Motzasi” was not well known, but it had some spectacular songs on it.

Yacov has his own orchestra and can be seen singing frequently in the Jewish wedding scene. To hear a taste of his sweet voice, check out this YouTube video of him singing Shloime Daskal’s “Anim Z’miros” (http://www.youtube.com/watch?v=MYKcz1sNAbU).

He is currently collecting songs for his album and they can be mailed to him at yacovyoung@gmail.com

Michoel Pruzansky: Michoel “Pruz” Pruzansky is a big hit. His powerful “MBD-like” voice is a thing of beauty. He released his debut album “Ashrecha” back in 2003 and since then, he has only gotten bigger. He released his second album “Pruzbul” in 2007, which led to a huge change in his style making him the “Pruz” we all know and love. He rocks a concert with the best of them and even has his own orchestra. Since his last album release he has sung on last years Oorah’s “The Shmorg” album (a free download) and Shloime Kaufman’s “Avodas Tzedaka“.

Pruz is still looking for a couple more songs for his album and he can be reached through the contact form on his website.

UPDATED:There are of course two albums coming out very soon.

Lipa:Lipa has been talking about his new CD a lot on Twitter/Facebook. He says the release date is May 16th. Lipa’s career is quite long to announce everything he’s been in, but I’ll give it a try. Besides the fact that Lipa is constantly singing at simchas and was featured in basically every concert this year, he has also released several albums, including: Nor B’simcha, Shema, Letova, Bederech(Gelt&Mi Sheamar), New Project X, Keneina Hora (Rabbosai, Arba Middos, Chalom), Hallel, The Next Project X, The Lipa Experience DVD, A Poshiter Yid, A Poshiter Bellobration DVD, Non Stop Lipa, Oorah’s The Shmorg and Kumzing. I know I left out The Event, Ohel, Hasc and such. That’s just too much linking for me! It’s quite clear that Lipa’s a star and his next album is highly anticipated by most of the Jewish music world, if not all.

Yehuda Green:Yehuda’s follow up album is titled Yearning, and says it should be in stores by the end of the month.

Yehuda is known as the Carlebach of this generation. No one is trying to compare him to the legendary Carlebach, but he is the closest we have in style currently. He’s been featured in many concerts and can be seen as a frequent visitor in the Carlebach Shul in Manhattan.

His debut album Land of Your Soul had the hit Nishmas Kol Chai on it. He has sung on Oorah’s The Shmorg and his popularity is only growing by the day.

Yossi Fraenkel: Fraenkel is by no means a newcomer to the Jewish music stage, however his first album is being worked on as we speak. He’s known to have performed with some big time stars, such as Avraham Fried. However, what he is most known for is his acts of chessed. His visits to children’s hospitals and chessed concerts are many.

His debut album is being worked on and with his father, Gershon Fraenkel’s music. It’s going to be a Fraenkel family album and will be called Mishrei Aba. There is no expected released date as of now.

Benzion Twerski: You may or may not have heard of Benzion Twerski yet, but we guarantee you will soon! His debut album, Vechonen, is currently in duplication.  The songs were all composed by him (in the Twerski tradition).  The musical arrangements were done by Yidi Strohli.  The guest soloists include Mendy Strohli, Michoel Schnitzler, Shloime Taussig, Yoeli Berkowitz, Yoeli Falkowitz, Duvid Reifer, Shauli Waldner, and Lazer Kish.  It is a masterpiece of nigunim of the old style, each being original, enjoyable, hartzig, and completely singable.

It is being distributed by Nigun, Sruli Wertzberger.  It is expected to be released within the next 2 weeks. 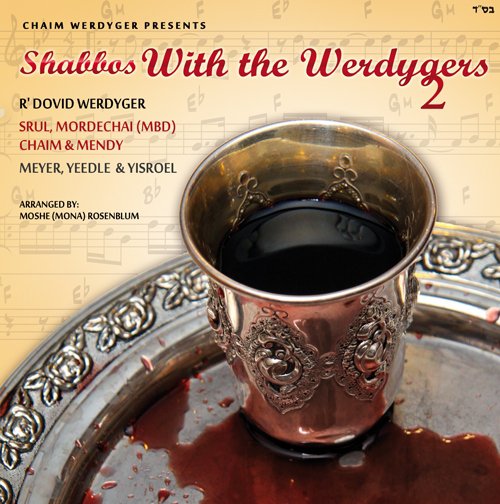 Shabbos with the Werdygers 2! This is the second edition for the Werdyger family. The album is Shabbos day z’miros featuring all the Werdygers. MBD, Mendy, Yisroel Werdyger, Yeedle, Chaim Werdyger and other members of the family. It’s due out in the next two weeks! Check out the first album here.

If you know of any more albums that are due to be released soon and have information that you would like displayed, contact me at jmderech@gmail.com