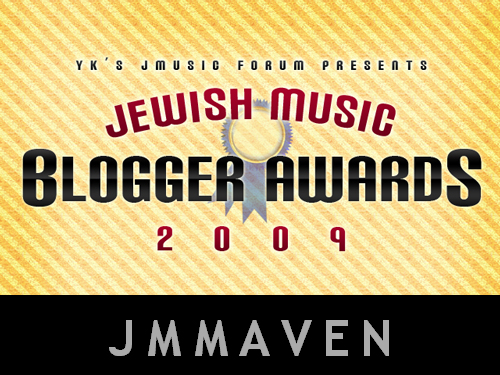 This is my first year participating in the Jewish Music Blogger Awards, and I am honored to have been asked to voice my opinions.

Since I didn’t volunteer them though, I take no blame for anything. :)

Best Album: This one’s a hard one. I enjoyed Yaakov Shwekey’s Ad Bli Dai album a lot, and while it didn’t take my life over initially, like it did to a lot others, Benny Friedman’s album Taamu has been growing on me. I also just got my hands on Shloime Kaufman’s Avodas Tzedaka, and I enjoyed the few tracks that I heard from Miami’s Yovo. However, I’m going to have to give the award to Mordechai Ben David’s Kulam Ahuvim album. After some people were saying that the King was past his prime, he came out with an amazing, fresh sounding album that had some amazing arrangements and compositions. It’s not necessarily easy to release an album that “goes with the times” after having released numerous other albums years before some of the current generation of singers was born, but MBD (and Yeedle) sure did it well with this album.

As some other writers have done, I’m going to give the honorable mention to Yaakov Shwekey’s Ad Bli Dai. I don’t think it got as much attention as it deserved, and I enjoyed a lot of the compositions and arrangements on the album.

I also enjoyed Baruch Levine’s Touched by a Niggun album immensely – while it’s a different style, and maybe doesn’t fit into the same category as the other albums released, it was an amazing album in its own right which I don’t think got the attention it deserved.

Best Song: I think a best song is not defined as what people are singing now, but what people will still be singing in a year from now. There aren’t that many songs like that – I think Yossi Green’s Anovim and Baruch Levine’s Vezakeini were a few that fall into that category from the recent years. So according to my definition of best song, I’m going to have to go with Yaakov Shwekey/Yonatan Razel’s Vehi Sheamda. It took the world by storm since it appeared on Caesaria, and now, almost a year later, it is still being sung all over.

Best Debut Album: There were a lot of solid debut albums released this year. I listened to most of them, but the one that I really enjoyed was Yosef Chaim’s Lo Lefached. The songs and arrangements were very solid, and the album was done very well.
Honorable mention goes to Benny Friedman’s album Taamu, with Berri Weber’s Bezras Hashem close behind, both of which I enjoyed a lot.

Best Arrangement: This category definitely is a matter of opinion, and I didn’t pay attention to all the songs like I should have. But the song that won me over from the start was definitely MBD’s Kulam Ahuvim, arranged by Mona Rosenblum. It had a fresh new sound, and the way the song was arranged and came together just blew me over.
For the honorable mention, I’m going with a song not on the list – Baruch Levine’s Touched by a Niggun, arranged by Yanky Briskman. The way the song and words fit together, spanning different keys and tempos, I think it was an amazing piece of work.

Best Boys Choir: (wow – there are a lot of choirs around :) ), I’m not going to pick one, since I haven’t really listened to all the albums. I heard a few songs each from Sheves Chaveirim , Miami Yovo, and YBC’s Shmoy, but not enough to judge and compare the overall albums.

Best English Song: I heard most of the songs, so I feel competent enough to state my choices. I’m going to give the best English song award to Baruch Levine’s Piano Boy. I enjoyed the song and the music a lot, but the message and meaning in the song was very powerful, and pushed it over the top.
Honorable mention for this category goes to Miami’s Me’im Hashem – I didn’t listen to the whole album, but that one song I listened to a few times. The music and words just drew me in. I also enjoyed Shua Kessin’s Generations a lot – the words and arrangement came together very nicely.

Best Yiddish Song:I haven’t heard all of them, and on a lot of CD’s I won’t have the patience to listen to the Yiddish songs, but the one that grabbed me was MBD’s Moidim. It also helped a lot that I read the CD booklet, and understand the message of the song, and the story behind it.

Best Concert DVD: I honestly only watched one of them in full, and I really enjoyed that one a lot – Ohel 5770. The whole way the show was integrated, with the video and music coming together, really had me enthralled. I also saw a few pieces of the Event 5769 DVD, and the Hasc 22 DVD, and enjoyed the parts I saw.

And as an added bonus, I hereby award the Best Marketed Album award to Benny Friedman’s Taamu– the way Benny and Sruly Meyer used viral marketing to get the album out there was just amazing, and I believe unmatched by any other album.

I also just wanted to mention the Kumzing CD/DVD –I didn’t see the full DVD – all I saw was the one song that was up online, but I have the CD, and I just loved the way they set up the whole show, and got the whole audience (the Bachurim) involved. And a Kumzitz album doesn’t always go over so well, never mind a Kumzitz DVD, but again, judging from the music, they did this one right.

Thanks again to JMR for hosting the awards for this year, and Kol Isha for coordinating the whole thing, editing the reviews and for reminding (threatening? :) ) me to get my write up in.

Looking forward to another year of amazing Jewish Music!!