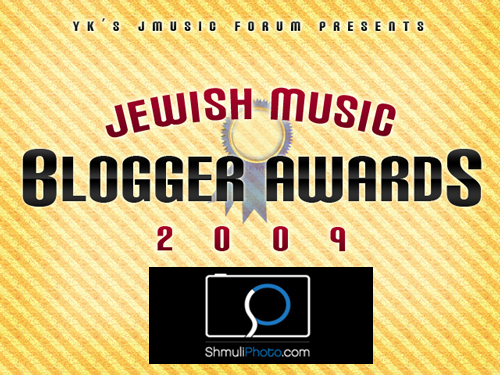 ShmuliPhoto’s faves of the year.

Best Album: Taamu – Benny Friedman.   The best album goes to Benny, who for sure lived up to the hype that came along with the pre-release of his debut album. I have seen Benny sing years ago when I was in Yeshiva inTzafed, where he used to copy his uncle Avraham Fried, but in his new alum he takes the familiarity we have with Avraham Fried mixes it with his own personality, and voila, an amazing album!

Best Song:Letova – Benny Friedman. Although I love the other songs in this selection, and I do think that the Vehi She’amda is an amazing song (and maybe I would have picked that song over this one if not for…) but with the Letova track I feel more of a connection.   this connection could also be because I have gotten to know Benny with his amazing personality.

Best Debut Album:Taamu – Benny Friedman.Well, this one should be obvious from my two previous picks… but my second pick would be Berry Weber’s Be’ezras Hashem, which is also a solid album. And #3 would be going to Shloime Taussig’s debut album.

Best Arrangement:skipping this one if you don’t mind ;)

Boys Choir Album:  Kol Noar Boys Choir.This was an amazingly refreshing new album, that has brought many new styles to Jewish music. Mo Kiss Did an amazing job to give us a fresh choir.  I look forward to a new album from this choir.

Best Yiddish Song:Emes – Benny Friedman.A song that has great happy rhythm that you don’t hear that often in Yiddish songs. When I heard that there was going to be a Yiddish song on Benny’s album, I was thinking that we’re getting an other slow song, but I was pleasantly surprised when I heard this song, that has a great message for life.

Best Concert DVD:I’m not a big fan of watching a concert on DVD, since it is very hard to capture the feel of a live concert on video, however it can bring back a memory from being at a concert, therefore I will not select a favorite. I was present at The Big E’vent, but dont think the DVD brings back the same feel of being there, becuase it was the crowd that brought that atmosphere.