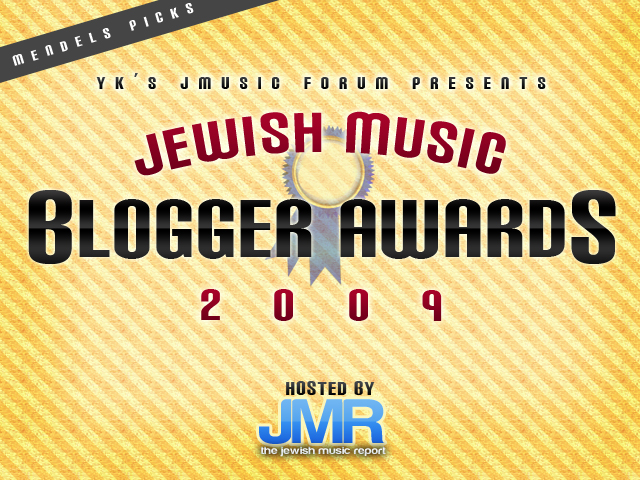 Mendel the Sheichet’s faves of the year.

Best Album:Kulam Ahuvim – Mordechai Ben David. For this category I have to go with MBD’s Kulam Ahuvim. Yeedle’s spunky, fresh style and great ear for catchy tunes along with MBD’s still amazing voice and ta’am really do it for me. Coupled with superb attention to detail on everything from recording quality to the mix and master, for me this is the clear winner by a good few laps.

Best Song:B’inyan Hasimcha – Mordechai Ben David. For the best song I have to go with B’inyan Hasimcha. Beyond how well the duet works, this song is just an instant “pick-me-up”. From the lyrics, melody and arrangement to A. Razel’s fun vocs – this song just has all the elements that can turn your day around faster than a Florida real estate market crash.

Best Debut Album:Taamu – Benny Friedman.While many great artists debuted this year, I think Benny Friedman takes the cake, as he and the production team skillfully display that the bar is being raised if you want to make it in the tough Jewish music market of today. Despite the ever growing epidemic of music pirating in the Jewish market R”L, this CD quickly went into a 2nd printing and for good reason. In the next decade, this will likely be the artists to beat. Of special note as well was ABD, who ignored all the “rules” of Jewish music production and marketing and put out what was for me a huge breath of fresh air. I’m keeping my eye out for what these guys will (hopefully) put out next.

Best Arrangement:    No Lyrics – Benny Friedman.Ian Freitor’s arrangement for “No Lyrics” on Benny’s Taamu really hit the spot for me. Fresh, crisp and uplifting – who needs lyrics when you have an arrangement like this? Not me, for one.

Boys Choir Album:  Yovo – Miami Boys Choir.Lots of really great ones in this category, but all in all, one edges out for me, even if by barely a neck. With “Yovo”, Yerachmiel displays why MBC has been around for decades and still going strong. That’s not to say they didn’t have stiff competition though, with some other great albums like Kol Noar’s super fresh debut album certainly giving MBC a run for it’s money in my CD player at least.

Best English Song:Sunshine in the Rain – Shloime Kaufman. Maybe I’m just a sucker for Abie, but Sunshine in the Rain on Shloime Kaufman’s Avodas Tzedaka, featuring the legendary Abie Rotenberg, hit all the right spots in my heart – and ears of course. I always find Abie’s songs so much more poetic, original, relevant and purposeful than most of the other English songs on the Jewish music scene and this is one of his very best. The arrangement is nice but sufficiently laid back to just allow the lyrics and melody to shine for themselves and the emotional rendering by both artists is right on target.

Best Yiddish Song:Moidim – Mordechai Ben David. I’ve long loved MBD’s rendition of Yiddish songs on many of his albums, and “Moidim” is one of the best of that bunch. The story is wonderfully meaningful and the lyrics (written by Lipa I think) do that story true justice in conveying it in the highly poetic yet descriptively vivid way it does. To those lost by that last sentence (and I may be one of them) what I’m saying is that you can see the story playing out in sharp HD in your mind’s eye. Additionally, the melody shadows the emotional movement exceedingly well throughout and MBD does an amazing job of losing himself in that emotion. Long story short, great song – me like.

Best Concert DVD:Sadly I’m not very familiar with the DVDs out there. You see, most of my serious listening happens in my car. While it is equipped with a DVD player as well, my wife is adamant about watching DVDs while I’m driving being somehow unsafe. Women – go figure.