Review on Shwekey & Friends in Manhattan 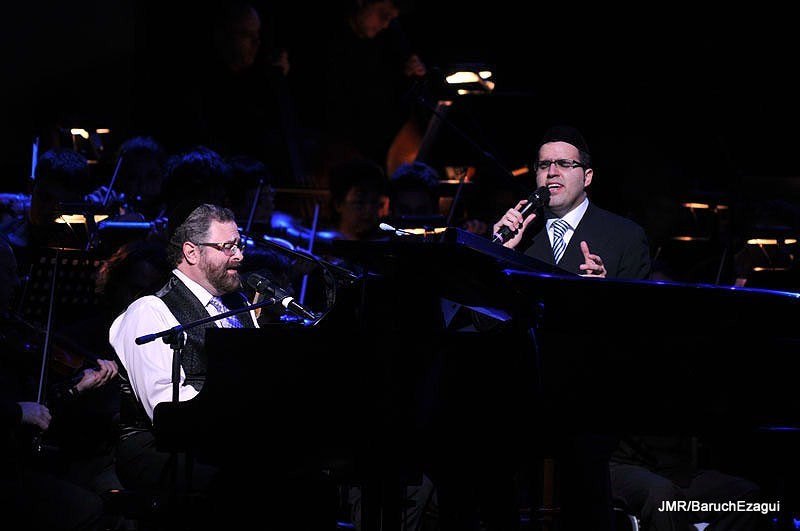 Wow! What a blast! A cold blast at that. I showed up in Manhattan a good half hour before the Shwekey & Friends show. I circled Manhattan like days of old, trying to find a parking spot, however, there was not one in sight. I figured being a half hour early would get me a street spot; I figured wrong. The snow had taken away what was left of the open spots and everything else was taken up by snowed in cars, awaiting some good shoveling. So if you want to make some good money, head to Manhattan to shovel. Anyway, I finally parked in a garage at the hefty cost of forty some dollars and I was on my way to pick up my tickets from the will call window. Unfortunately, there was a massive line down the block and I didn’t get into the show until 20 minutes after the announced starting time. Luckily, they were on Jewish standard time, and I showed up at the end of the instrumental music at the introduction of the concert.

I showed my ticket to the usher and my wife and I were showed to our comfortable seat. Seriously, it was a fantastic seat and would have been better if the guy behind me didn’t keep calling out random things in the middle of every song. “Yaakov! V’hee Sheomda! Shmuelly!” Seriously sir, I know who is on the stage and what music is going to be playing when the singer himself already announced it, and who is Shmuelly?

Regardless, it was a great seat and the show began with Nachum Segal, the master of ceremonies promising the crowd another Caesaria. Another Caesaria? I want a Manhattan, not a repeat of a past show! It’s okay, I think he meant it would be as good as the last concert we’ve all seen on DvD. Segal announces Yaakov Shwekey and he enters to his first track of his latest album V’ohafta. The music was pumping, the crowd was clapping, and it was faster than on his album. It was definitely not recorded vocals or music. Shwekey showed off some fancy footwork in the middle of the song, which pasted smiles on the crowd around me. He’s a fantastic entertainer.

Shwekey thanked everyone for coming out and said that it was a special event for him because one of the tzedakah groups involved in sponsoring this concert was his wife’s tzedaka organization. He said that they just finished a new state of the art building for the charity. He then went into a Chupa Medley, featuring Mehayra, Sameach & Aishes Chayil. At the end, the crowd continued Aishes Chayil and he gave us an encore of the chorus once more. After the medley ended, he went back into a fast song with Hein Am from his previous album and ended it with another encore demanded by the audience.

Shwekey then proceeded to call out the Shapiro brothers of Acheinu and he thanked Yochanan Shapiro for his compositions and then they sang those two compositions together. They were Ilon from his latest album and Im Eshkacheich from his third album. Acheinu’s back up vocals added a lot to both songs.

Acheinu then left the stage and Shwekey started off Veshochanti from his latest album. He got the crowd to say “Nu Nu Nu” for him at each appropriate point in the song. It was really fantastic. The only problem was, he sounded a bit rushed.

Shwekey then called out Baruch Levine and sang a medley of songs composed by Baruch Levine. Levine played the piano and they sang a duet throughout. The songs were Chasoif, V’zakeni & V’hoo Keli.

Baruch Levine then went off the stage and Shwekey went into a medley of old songs, including Omar R’ Akiva, Yedid & Shomatti.

After the medley, Shwekey called out Yossi Green and together, they sand Tshuva from Shwekey’s latest album, which I must admit, sounded a lot better than on the album and closed with a beautiful rendition of Anovim.

Nachum Segalthen came out to announce the sponsors of the concert and gave the men a chance to daven maariv.

Shwekey then came back after the videos and announcements and sang Mimkomcha from his latest album, which he said is “one of my favorite songs”. Next up came Ben Bag Bag, which got the crowd pumped up again. At this point in time, I noticed The Cool Jew in the aisle to the left of me taking pictures of the concert, which I’m sure you can see on his website. Also I saw JMR’s Baruch Ezagui taking photos as well.

Shwekey announced he was calling out one of his favorite composers and that every shabbos table has songs of his being sung. Abie Rotenberg came out and told the story of how he had two planes that were scheduled to fly to NY, but both of them were canceled because of the snow. He then took a small jet to Newark and got to the show as it started so he announced to the crowd that his practice was right now and then took off his jacket and told Shwekey to do the same. They then sang Abie’s classics. Al Kein, Naar Hayisi & Mama Rochel.

After Abie left, Shwekey sang another medley of older songs. These were Hu Yiftach, Yerushalayim, Pisome & Shehechiyanu. Afterwards, Shwekey called on Yonatan Razel, which the crowd was screaming for. First they sang Shlomo Carlebach’s Esa Einai and then sang the amazing V’hee Sheomda together.

Shwekey then asked if any sefardi friends were in the house and sang Natzliach from his latest album. He seemed to get tired towards the end of it and it was not nearly as good as the rest of the concert. Finally, he called out the whole cast and they sang Racheim together. I left during Racheim so I could get my car before everyone else got there. I didn’t feel like staying in Manhattan all night.

All in all, it was a wonderful night. I didn’t hear Ad Bli Dai, and I’m assuming that he sang it as the last song, although I’m not sure. This is the second Shwekey concert I’ve been to and to me, they are officially the best.

See a full gallery of photos from the evening here, taken by Baruch Ezagui