Yaakov Chesed – The Passage: Another Review 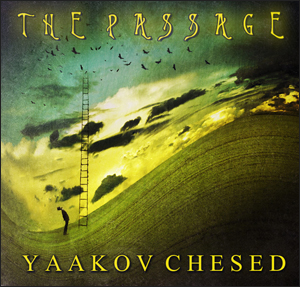 I’m going to start out by saying – I grew up listening to secular music – With that said, I haven’t found much in the Jewish music world that compares to that of secular music. That’s not necessarily a bad thing, but there are still those who need an outlet of secular styled music with a Jewish twist. That’s where Yaakov Chesed enters. The songs are shorter than the standard Jewish song, which can be quite pleasant at time because lengthy songs can get nerve wracking.

Jake Polansky, the lead singer on this album has clearly improved his vocals from the first album. The band also added choir singing in the background, which changes everything. I love Jake’s voice, but listening to him all the time makes it more of a solo album, which is not something I’m looking for.

This is a group of incredibly talented individuals who have mastered their instruments and also their vocals. This includes Jake Polansky (Lead Vocals / Rhythym Guitar), Michael Shapiro (Lead Guitar / Back up Vocals), Michael “Mosky” Moskowitz (Drums / Back up Vocals) & Aryeh Kunstler (Bass / Back up Vocals). Although they are not considered mainstream chassidic Jewish music, they definitely serve their purpose as catering to the modern crowd and is great for kiruv. Instead of having a rigid mindset and looking down upon this style of music, I ask that you take a second look at them as doing “chesed” for our Jewish communities worldwide.

All I Ask – This song delivers the deep message of the desire of “shifti biveis HaShem – kol yimay chayai” (To serve in the house of G-d – All the days of my life). Although I’m not a huge fan of this song, I understand how this would be a good song to give you a boost.

Hold on –  I love this song. The depth of this song is gadlus (greatness). What’s the story? A person who feels the darkness of the world penetrating their yiddishkeit, seeping in. In the chorus, the vocalist emotionally sings how he must “Hold on”, in other words, no matter what, he must fight the darkness and hold onto the light that is his religion – Judaism.  It’s soft rock as opposed to the loud noise that bothers many people. The best part of the song is “I have my sword – I have my shield”. Listen for it, you’ll gobble it up!

We Must Fight – A strong message that needs to be taken to heart hides inside this song. It’s telling us that the enemy tries to “hold us down”, however “We Must Fight” with not only our soldiers, but with our Torah learning, our ultimate weapon. A very inspirational song that can uplift anyone, especially those who have children in the army.

Barchi Nafshi – This song is a tad repetitive, however it’s still pleasant to listen too. The electric “oowoahoowoah” is so soothing and pleasant on the ears. This song is about G-d’s creations and how they are all miraculous and abundant.

Tzoma – I tend to skip this song. It’s not a bad composition, it’s just too loud for me and the chorus irritates me a bit. The song is about calling out to HaShem. A great meaning but you don’t need to yell out to HaShem. He can hear your prayers :).

Eishes Chayil– This is not your typical Eishes Chayil. Usually they are ballads, however this one has more of a chilled out, sitting by a kumzits feeling to it. It was composed by the lead guitarist, Michael Shapiro, who doesn’t usually do vocals, however he leads the refrain in this song. Oh, I forgot to mention, this song is fantastic!

Hamalach – I don’t necessarily agree with what they did here with this song. The sound is great, but a rocked up, electric guitar version of Hamalach seems a bit of a contradiction. All in all, from a musical standpoint, this song is top notch. I don’t understand the fast version, how am I supposed to sing a child to sleep with this?

Mi Bun Siach – This is a beyond gorgeous tune. I’m not sure how you can sing it without the guitar and I’ve never seen guitar being played by chuppah. The choir harmonies on this song really make this song what it is. A peaceful melody for the chassan and kallah.

I’m With You – This song will easily be the most popular song. The refrain ends off every verse mid sentence, not your typical Jewish style. However, it is incredibly catchy and a terrific listen for the treadmill. The “Gam Ki Ailech / Walk Through The Valley of The Shadow of Death” section of this song is the sweet center. If you’re wearing headphones, you can hear each section that’s being sung through different earpieces. I’m guilty, it’s my favorite song :).

Hallelu – This funky tune fits perfectly with the words Hallelu – Praise.  It’s a very relaxing medley that actually makes you want to praise HaShem. It’s said that music has a way of altering the body and soul and that’s why you have to be careful what you listen to. Nothing too immodest, but rather music that uplifts the neshoma and makes you want to learn. That’s what this song excels at. It has a way of being a touch secular but still very frum at the same time. An amazing song!

Simcha – On my copy, this song starts 30 seconds into the song. Was their a mistake or maybe it’s just my version? Anyway, this is a bonus track – the famous Shlomo Carlebach’s “Simcha Liartzecha” – they rocked it up and this song is basically a demonstration of their musical talents. The music is way too loud for the vocals, so there intention must have been to display how talented they are with their instruments. I could have done without this track; some may enjoy it though.

It’s a fantastic album that for sure should be bought by kiruv rebbeim. This genre of music has its more secular fan base and will surely be eaten up by them. I love it too, it reminds me a lot of the quality rock music I used to listen too. I suggest everyone to give a listen to the sample track.