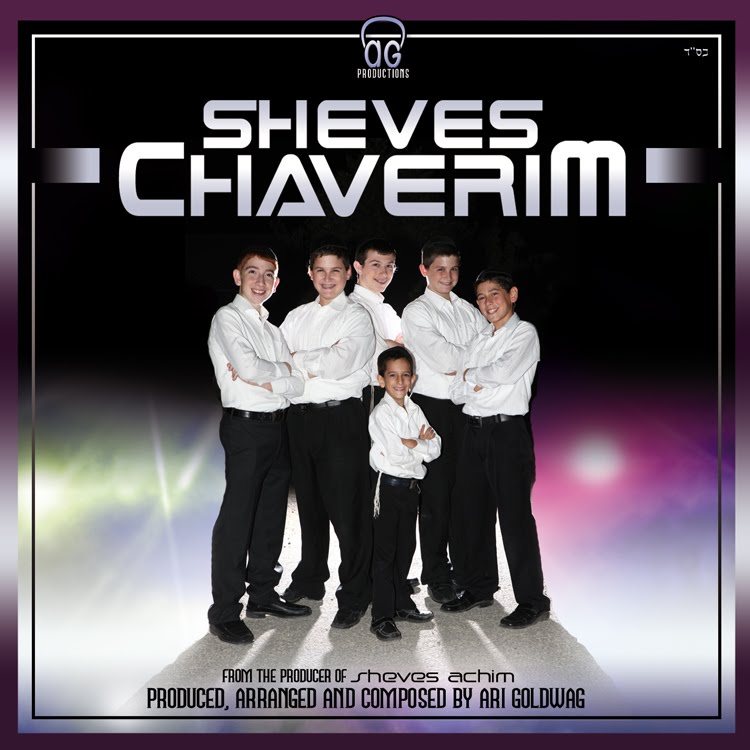 This album continues where Sheves Achim left off. Ari Goldwag compositions and harmonies with talented child vocalists singing them. It doesn’t need much introduction – Therefore, lets get down to Tachlis!

Im Hashem (MILD) – A Yeedle “Bizos Ani Boteach” intro. Like the rest of the album, the sound isn’t so clear on this song; it’s still good, just not amazing. Good beat in the background and classic “Sheves Achim” styled harmonies in the background throughout the song. The second time around you can hear the aged Moshe Bell. His beautiful voice is gone, but he’s still good for low harmonies. The stars of this album are the Sheff brothers (Zev and Baruch). I hope they are the picks for Sheves Achim 2.

Ki Ailecha (HOT) – My favorite song on the album is this song. It’s got “Sheves Achim” style screaming from it. Fun to sing and even more fun to listen to. You can hear the opening solo by Baruch Sheff – a beautiful voice. Moshe Dov Goldwag, Ari’s son, enters the second time around and he has a really cute voice. You can tell how young he is from the way he pronounces the words. He has amazing control for his age (4-5?), watch out YM Gerstner! Shlomo Lipman is after him and in my opinion has a fantastic voice that will only get better. Yair Frohlich is after him and is the star of the album with the most lead solos. He sounds like Goldwag did when he was a kid. The best part of this song isn’t the kids, it’s Goldwag when he takes over at the end. Gorgeous harmonies behind him add to the climactic ending.

Mi She’ana (HOT) – The first slow song is beautiful, bringing me back memories of the menucha filled sounds of “Mi Ha’ish” from Sheves Achim. Frohlich leads the song and sounds amazing. Moshe Dov Goldwag is so controlled with his solo, it’s amazing. B. Sheff and Lipman share a beautiful alternating duet.

Hashem Loves You(MILD) – Welcome to the islands! That’s the feeling you’ll get from this song after you hear it. It happens to be a great tune and the refrain is terrific. The chorus can get kind of annoying but this song is great for little kids. The “ooo Hashem Loves You” ending is very cute.

Yehi Chevod (MILD) – This song doesn’t do it for me. It’s a beyond beautiful tune, however it’s a bit different for me. The low and high part are very similar and it’s kind of like the tune that never ends. When this song comes off I alternate skipping it and listening to it.

Tisgadal (COLD) – Freilach! It’s a cute tune and can be fun to dance in a circle with, but that’s it. It has no feeling of “Sheves Achim” style in it.

Borei (HOT) – Major “Sheves Achim” flashback time. This song sounds like a mix of “Ogil” and “Yehi Shalom” from “Sheves Achim”. This song is filled with “WOOOHOO!!!!” I’m actually going to have to take a break from this review to start dancing. Be right back! :)

Al Tira (HOT) – This song bring back memories of “Avraham Yagel” from “Sheves Achim”. It’s a soothing medley that I can sing and play over and over again. The harmonies are eloquent and the medley is splendid. This is my favorite slow song on the album.

Sha’arei Shamayim (HOT)– Techno time! This songs brings back memories of Vehu from Sheves Achim. This should have been the first song on the album. It’s not going to be as memorable because it’s so late in the album. If you’re looking for some fast paced techno action, look no further – place this song on repeat.

Shema Hashem (COLD) – No, sorry, skipping. I don’t need to hear Carlebach’s Ailecha with different words for the refrain. It was a nice idea to add it, but there’s 11 other songs, this one could have been left out.

Finally Here (HOT) – Ladies and gentleman this song is a close favorite of this album. It would have been if it weren’t debuted originally by Ari Goldwag. It’s way better than before, the kids are the perfect fit for this song. Their voices soar, and the arrangements are top notch. Why is it track 11? This is the equivalent of Superman from “Sheves Achim”. I happen to like better but I’m sure every girl will disagree with me.

Sof Davar(MILD)- This is one somber, ominous tune. It makes sense, the songs translation is – The end of matter is all that is heard. Fear Hashem and keep his mitzvos, for this is all of Man’s purpose (Ecclesiastes 11:13) – It’s a beautiful song, but way to kill the mood from the last song. The arrangements are angelic and this song would be a great kumzits song for the tisha b’av time of year.

Ki Ailecha Chaser (????) – This song isn’t listed in the booklet. I guess the attention was to leave the album with a happy note instead of leaving you with the last song. It features Ari Goldwag and I believe Baruch Sheiff singing “Na na’s” to the tune of Ki Ailecha (Track 2).

The sound quality on this album is not terrific but it happens to be a quality album. Some people may think it’s a cheapy, but that’s simply not the case. It’s definitely no Sheves Achim, however it’s a nice debut album. As hard as it is, you can’t compare this album to Sheves Achim. Let’s wait for Sheves Achim 2 for that!

Buy the album here – It’s worth it!