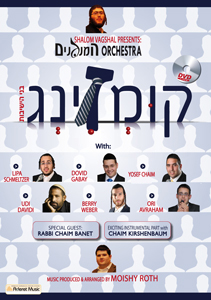 I didn’t really pay too much attention the all the promos for Kumzing before it came out. Honestly, it didn’t really appeal to me. Kumzitz for Yeshiva Bochurim, in Eretz Yisroel, Half the names they were promoting, I never even heard of: Ori Avraham? Uri Davidi? Chaim Kirschenbaum? Who are these people? I had no intention whatsoever of listening to this album.

But then I was asked to review it. I figured I could try to be open minded about the album even if my expectations weren’t all that high.

Which is why I was completely blown away by it.

From the opening notes of the first song, Moishy Roth and his choir were just amazing. I’m imagining this must be what the Leviyim in the Beis Hamikdash sounded like. Exquisite, hartzig. Simple, uncluttered harmonies enhancing great songs. I loved the first song “Umachlif Es Hazmanim” and was genuinely disappointed when it ended. Was a little surprised though to hear not singing “Kel chai v’kayam”, but using shem Hashem. What’s the deal with that? And as much as I thought I wouldn’t love the little spoken parts “shiru iti”, “noch a mul”, “ayze yofi”, etc. I did. Every one of the four songs that they sing was done to perfection. Not a bad opener for a CD I wasn’t even going to listen to, huh?

A minute to tell you what this CD is. A collection of thirty seven songs sung at a Kumzitz in Yerushalayim by: Moishy Roth, Yosef Chaim, Dovid Gabay, Berri Weber, Chaim Kirschenbaum, Lipa Schmeltzer, Ori Avraham, Udi Davidi. Over two hours worth of music, with sets of different music being introduced by an emcee. Lots of singing and clapping from the audience with the performers constantly encouraging the audience to join them. Produced by Shalom Wagschal and Moishy Roth with all arrangements by Moishy Roth.

Ok, back to the music. Next up: Yosef Chaim Shwekey. (Am I allowed to acknowledge the fact that he has a last name? Did anyone else notice that in the CD booklet, his brother, Moshe Dovid, who composed some of his songs was referred to as just Moshe Dovid, with no last name?) At any rate, Yosef Chaim was great, singing his Hashleich (with help from the audience), Miami’s P’sach Libi. His next song was something called Ken Yevorech which I never heard before, but I’m guessing the audience did from the way they were all clapping and singing along. His last song in this set was Biglol Avos from his CD, with the audience joining in enthusiastically, finally ending with the high part from Hashleich.

The great music just kept on going, with Dovid Gabay taking the mike next, singing Yaakov Shwekey’s V’hi Sheamda. All I can say is wow. A gorgeous song, done beautifully. Gabay followed up with one of my favorite underrated songs – Havi from LeGabay. I would have loved to hear the full nine minute version from that he did on his debut album, but I guess that wasn’t meant to be. Gabay was joined by violinist Shimi Weitzhandler for the last song in this set, the moving Bein Haulam, a new song, composed by R’ Noach Paley with words from the Avoda in Mussaf of Yom Kippur.

While I wouldn’t want to have to follow Dovid Gabay onstage, Berri Weber didn’t seem to have any such compunctions. This was pretty much the first time I’ve ever heard Weber sing and I was surprised how much I enjoyed him. All of Weber’s songs were composed and conducted by R’ Chaim Banet. I only recognized two of the songs he sang: Hiney Anochi and Machinisei Rachamim, yet another of my favorites which he did beautifully. The other two, Adon Hashalom and Yehei Raavo were both enjoyable. And just because I don’t know them, doesn’t mean the audience didn’t – they all seemed to know all the songs! All in all, another beautiful segment to add to the chain of beautiful music these guys were creating.

Udi Davidi, an Israeli singer I have never heard before sang an original composition called Vayishma Koli which was touching and left me wanting more, but he wasn’t due back at the mike for a while. Chaim Kirschenbaum a talented musician was up next with an instrumental set where he played clarinet, guitar and saxophone.

The next singer was described by the emcee as a “yehudi pashut”, none other than Lipa Schmeltzer. I must take a minute here to mention how impressed I was with all the singer’s command of the Hebrew language. Every one of them was fluent and sounded completely at ease in the language, something I wasn’t expecting. Back to Lipa who, together with Ori Avraham, sang Avraham’s Tsur Chayeinu, an unexpectedly heartwarming song. Yitchok Fuchs’ Hallelu always reminds me of Robin Hood and his merry band of man, but everyone followed Lipa’s request to join in and sing with all their hearts.

Ori Avraham sang another original composition, entitled Yamim Baim, another hartzig song (hey, it’s a kumzitz, you kind of expect to hear lots of slow pretty stuff.) Berry Weber sang an original Yerushalyaim, a beautiful niggun, which I would have liked it even better with words.

And following in the original composition department, Udi Davidi sang an upbeat Sameach medley consisting of Sameach, Eize Tov Hashem and Tachshov Tov, a feel good song with a pop feel to it.

Yosef Chaim returned with a medley of songs from his album: Torasi, Keayal Taarog and Kol B’romo. The more I listen to Yosef Chaim the more I like him. He’s not loud or flashy and doesn’t over sing his songs. I look forward to hearing more from him.

The last performer for the night was Lipa with the Be’ezrat Hashem medley: Be’ezrat Hashem, Chamol, Ochila and my favorite song of the medley, Yosef Karduner’s Shir Lamaalot, which while not a song that makes me think Lipa Schmeltzer, was quite good. All the singers joined together for a finale with a song entitled Lechu V’neshuva, written by R’ Noach Paley for this event.

My final thoughts on this album? There were quite a few moments on this album were truly breathtaking. While there was plenty of clapping and singing along, there wasn’t a lot of outside noise to mar the sound. There is a lot to listen to here, with quite a few beautiful songs, sung by some very talented singers. If you like kumzitz, this is a great album. Not bad for an album I wasn’t even going to listen to, huh?