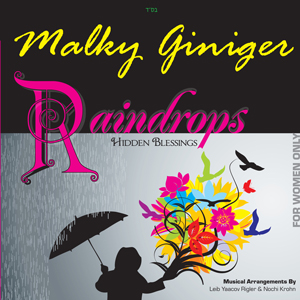 This CD is for Ladies only

The last time I listened to a female singing on a CD, it was me in my senior year of high school.( I was in the choir and our school put out a CD of our performances.) When I was presented with the task to review Malky Giniger’s new album, I’ll be honest, I was a bit hesitant. Female vocalists in the Jewish Music business aren’t so much my forte but I figured I would give it a shot.

Malky Giniger runs the RATZON music program for girls and women. The CD features songs she wrote and composed with musical arrangements by Nochi Krohn and Leib Yaacov Rigler.

Malky sings many of the songs on this CD however some songs feature solos from women in the RATZON program. The voices are full of power and strength and I truly enjoyed listening to the talent presented on this album. The CD is composed of mostly English songs with a few Hebrew ones scattered around. I personally enjoy the songs with Hebrew lyrics more than the English ones, so my favorite songs on the CD are Baruch Hashem, Romimu, and Ilu Phinu. I didn’t think I would like the album as much as I did. I guess being a female makes it easier and more fun to sing along with another female, as I have done so on the way to work a few times this week. Malky wrote a beautiful English song in honor of her Zaydee and hearing her sing it makes it all the more powerful and awesome.
The Challah Niggun is very interesting. I guess I’m not used to hearing a women belt out a song with “Ay Yai Yai’s” and “Oy Yoy Yoy’s” but its a very fun song to listen to and has a very catchy tune.
Some of the songs on the album have “Broadway” show-like tunes and if you enjoy female vocals singing English lyrics mixed with funky and jazzy tunes this CD is for you!!
I cant wait to see what else Malky has in store. I know that I’ll be looking forward to the next album curious to see what else Malky has to offer.
~TcK~
You can hear samples and purchase (or download) the album here.