Make sure to also read our review of Pruzansky’s Simchas Beis Hashoeiva here.

THIS IS A JMR EXCLUSIVE, IF YOU REPOST PLEASE CREDIT THIS LINK.

What would Chol Hamoed be without concerts? But if you enjoy boys choirs, more often than not you are faced with a tough decision: Yeshiva Boys or Miami? Lucky me. I am going to both concerts and will, iy’H, be reviewing them both. 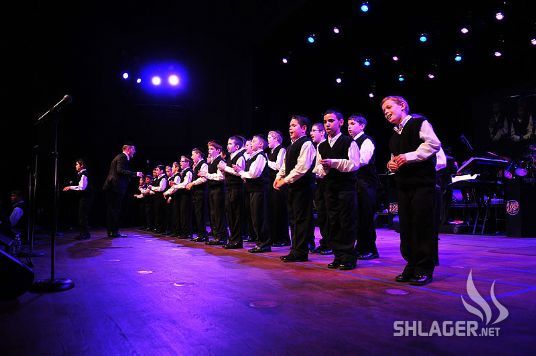 There are certain realities about concerts that just cannot be avoided. There will always be people around you talking. The performers will never sound as good as they do on an album. Mistakes will always be made. The music will probably be too loud. And if you have a family of music lovers, taking them all to a concert is an expensive proposition. But the energy in the room is palpable and while purists may complain that the music isn’t as good as on an album, you can’t beat the fun and excitement of a live concert.

This one was a sell out and started about twenty minutes later than the advertised start time, not too bad by Jewish standards. The opening act was a surprise guest, Shea Rubenstein who sang Modim from his debut album, Ohavti. While the orchestra was a little loud relative to Rubenstein, he did a great job warming up the crowd and getting the evening off to a leibidic start. I would have loved to hear Rubenstein sing Window in Heaven, but nobody asked my opinion.

Next up, Yosef Chaim Shwekey with Emes, the opening song from his debut album and probably one of the best, as well. He was warmly received by the audience and I think that Yosef Chaim is just going to get better and better as he gets more and more experience and becomes more comfortable performing live. I was both surprised and disappointed to see him leave after just one song.

The minute Dovid Stein walked on stage, he was greeted with a standing ovation by the two packs of yeshiva bochurim who were seated at the front of the auditorium. It’s very clear that he is very much at home on stage, as he waved and shook hands with some very enthusiastic fans who clearly enjoyed his rendition of Lazer’s Niggun. Stein sounded terrific and it left me wondering if perhaps one day we might hear another album from him. His debut album, Melech has a few excellent songs and never did as well as it should have. Are you listening, Dovid Stein? We want to hear more!

Again, only one song, and then on to the next performer, this time Dovid Gabay, who sounded fabulous. The crowd went wild when Gabay came out and the excitement only grew as he sang Don Don, from Omar Dovid. From there, Gabay segued into a medley of songs from both of his albums, singing Sois Asis, Birchos Avicha, Yimloch, The Letter and Yerushalayim. After a touching story about an accident he recently witnessed on the highway, Gabay sang Hagomel, an upbeat song which left everyone ready for more good music.

There was thunderous applause when the Yeshiva Boys Choir finally came out on stage. Maybe it’s just me getting older, but the choir seems to have gotten a lot younger. There were so many unbelievably adorable boys who looked to be no older than ten years old. If I had to guess I would estimate there were approximately twenty boys aged ten and under and maybe a dozen who were older than that. Have all the older boys retired? Or does it just make sense to start with younger boys because it will take longer till their voices change?

Either way, the boys came out in black vests, holding tambourines, singing L’maan Daas. I don’t know if I noticed it on this song or not, but when they started their next song, Hillel Omer, it was obvious that in addition to the boys onstage, there was a soundtrack in the background. There was no way they got that full a sound out of that group of boys. This topic has been discussed many times before and I’m not going to get into that debate right now. Clearly all the soloists were performing live and I’m guessing they just wanted a fuller sound. The choreography on Hillel Omer was very nicely done. In the shtick department, there was a little bit of gymnastics and two inflatable guitars tossed out into the audience.

The next song was Hamalach, a beautiful slow song from YBC 4 which opened with a single spotlight on one soloist sitting on the floor at the edge of the stage. All in all, there were five soloists and it was the right mood for a hartzig song like Hamalach, which was then sung again by the entire choir. All in all, very enjoyable.

I was impressed with Yaakov Mordechai’s poise and confidence, trying his best despite the fact that he was clearly hoarse. While Yaakov Mordechai Gerstner is still young enough to be with the choir for a few more years, it’s obvious that YBC is going to have to start cultivating some younger boys. There were two tonight who were featured quite prominently, and working off the CD booklet (correct me if I’m wrong), it appears they were the Kogan twins, Moshe and Aron. None of this is a problem – it is the reality of working with boys, but it means that over this year, YBC should be working on cultivating a new crop of soloists for us. I look forward to hearing them!

Back to the concert. The final song before the intermission was the upbeat Ata Kidashta, which featured top hats in the choreography and was very enjoyable.

Yosef Chaim was the next performer to take the stage, singing Lo Lefached, the title track from his album. Most of the audience didn’t seem to know the song, but that didn’t matter. Yosef Chaim did a great job and was very well received. In just a few short months, Yosef Chaim has already proven that he isn’t just another Shwekey brother. He is a talented singer in his own right and if he plays his cards right, he could be around for a very long time.

The next performer was Yaakov Mordechai Gerstner, who sang an original composition called V’Zaro. The younger Gerstner is clearly very at home on stage and even attempted some dance moves. Once again, this kid oozes poise and confidence. I guess that’s what happens when you’ve been performing for almost your entire life.

Dovid Stein did a beautiful job with one of my favorites, Hashem Yimloch, even though he had to sing it without Yaakov Mordechai Gerstner. Stein’s last song was Melech, the title track from his album, and he literally had people dancing in the aisles.

Dovid Gabay returned with a new song that Eli Gerstner wrote for this concert called Malchuscha. His final song for the night was, what else, LeGabay, which is just as terrific now as it was when he originally released it. Once again, there was lots of dancing and there is no question that the crowd enjoyed every minute that Gabay was up there.

The boys emerged again, this time in grey vests, amid loud chants of “YBC! YBC!” from the audience. They sang their hit song Shabichi, with nice choreography to keep it even more interesting. Yossi Newman took a minute to thank the staff at Brooklyn College for all their efforts which I thought it was a real Kiddush Hashem.

Then it was a trip down YBC’s memory lane for Shir Hamaalos, with solos by Tani Martin, the Kogan twins (at least I think that’s who they were, someone correct me if I’m wrong, please) and Yaakov Mordechai Gerstner, followed by In A Song with solos by Tani Martin and Yaakov Mordechai Gerstner. Finally, finally, it was time for the song we were all waiting to hear – Shmoy and it they didn’t disappoint. V’Ohavta was enjoyable as it always is, with beach balls flying all over the auditorium and there was one boy (again, how am I supposed to know who they are?) who appeared to be made out of rubber who danced, and did handstands and splits.

The finale was Kol Hamispallel, and while the adult performers didn’t come back on stage some smaller people did. Yossi Newman’s daughter, who appeared to be about five, joined him on stage, and as Eli Gerstner was introduced and took the mike for the first time, his son who couldn’t be more than four, joined him as well, and got a mike of his own, to sing along as well. Will he be the new face of YBC? Only time will tell.

See many photos at Shlager.net!

In a final note, my most sincere apologies to Shea Rubenstein, for not managing to catch him on video!