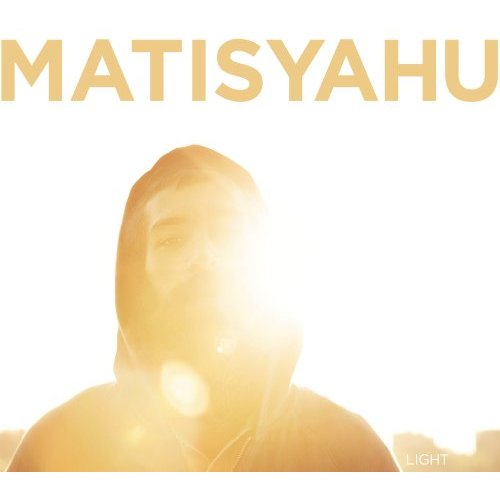 Matisyahu has long been an enigma – the frum superstar in the secular world. However, he has succeeded beyond anyone’s wildest dreams, bringing Torah messages to the most distant corners of the spiritual globe. His latest offering, “Light”, represents a bit of a change in pace from his earlier albums. Rather than convincing the world of spiritual values, as he did in most of his earlier songs, here he explores the theme of personal struggle in depth. The lyrics are not nearly as straightforward as they were earlier, either. You really have to sift through them to get at their meaning. However, unlike other searching artists, Matis always leaves you with a positive message at the end of the day (“I’m a struggla/’n me nah give up” for one).

Artistically speaking, he’s on the move. There’s much less reggae here than there is electronica and hip hop. It’s obvious that a lot of work went into the album – maybe even too much. The album as a whole is lacking in pure music; what with all the vocal and electronic effects going on, there aren’t too many moments of simple listening. This is a bigger problem than it may seem at first glance, since the songs are relatively short. Only two songs crack the four minute mark; one due to some whirling Piamenta solos (yes, you read that right), and the other due to soft echoing that stretches out the song. In contrast, all three of his full length albums are mostly filled with songs that are four minutes and above.

Before we go on, I would like to address the question: Is Matisyahu’s music Jewish? Well, it depends who you are. Is it going to bring you upwards, or G-d forbid, otherwise? This album will certainly fill a need for many kids who are struggling with Yiddishkeit – as they’ll find in Matisyahu a kindred spirit, who can serve to uplift and inspire, and help them recognize that struggling is what we do. For people who don’t need that, well, it isn’t meant for you. At the same time, I do wish there was more overt Torah, as was true in the earlier albums. But the discerning listener can certainly pick up random quotes scattered all over the place.

And about Matis and his chosen path – please, people, no judging. To each, his own.

Smash Lies (***): This frantic song seems to be a personal ode to his lifestyle and the precarious balance Matis leads. Matisyahu starts out immediately with the internal fight (“Where’s the bad guy/on the inside/one day I might try). This song is packed with electronic and vocal shtick – it’s a crowded listen. Not my favorite Matis song, but the variety of ways Matis sings the words “Dream awake” make you listen to it again.

We Will Walk(***): The beginning feeling of this number is a bit of welcome relief from the chaos of Smash Lies. However, within one verse of the chorus, the sound opens up even more with some rapid-fire rhyme spitting. On one hand, I can appreciate the speed that he handles his rhymes, and the fluidity of the rhymes themselves. But this is one of those moments where I wish he let the song move itself into that direction, rather than forcing it too fast.

One Day: (*****) Here’s the best song on the album. There’s a good balance here between Matis’ natural vocal beauty, and the programming. Lyrically, it’s positive just about all the way through (Sometimes in my tears I drown/but I never let it get me down); and the light and subtle Moshiach theme is nice. The only lack is there could have been a nice guitar solo placed somewhere in there, but all you get are really the computers.

Escape: (**) This is a gloomy lyrical take. The guitars certainly present it as such. And I can’t figure much out of the lyrics, besides for the obvious life/death conundrum that seems to be in his mind. I’d like to understand these lyrics more, but they’re either too abstract, or too easily translated simplistically.

So Hi So Lo:(*****) A return to some of the old Matis – beatboxing, reggae/rock power. This song also explores more faith than was apparent in the first songs (let go of the steering wheel/let go let go). It’s certainly one of the best songs on the album, with the eternal struggle described powerfully and clearly. I like it more as I listen to it more.

I Will Be Light:(****) This one’s a lower key, reggae song, with the balanced questioning, yet spiritually tempered answer of “I will be light”. Again, good message, nice presentation, especially towards the end of the song. I wish that ending was carried out a bit more.

For You: (****) It starts out like an eighties theme. But this is a pretty cool song. I assume the “I” is Hashem, or maybe the Pintele Yid, but this is one of the more clearly uplifting songs, as well as one of the few songs that isn’t just about a million layers of programming. We’re still stuck with the shortness of it – it barely hits three minutes.

On Nature: (***) Strong lyrics – talking about the soul and its resilience (we’re just children of believers). But the tune is severely lacking, and the cute choir (Albert Leonard Middle School Boys Choir), along with the random bagpipe solo, doesn’t help it much. It’s certainly listenable – but that’s due to the strength of the beat more than anything else.

Motivate: (****) I can recognize a Piamenta solo from a mile away. And here, Yosi picks it up from the opening notes, making this a beautiful song. I don’t get the ending lyrics (Catch the arrows filled with poison), but the Piamenta wailing is simply gorgeous. Good production here.

Struggla: (***) Lots of electronica in this hip hop tune which is performed with Jah Dan. I really like the lyrics, which talk to a lot of the problems of our world (there’s something wrong with a system/that leaves it’s people victim) but remind us to stay the even keel (rise and never fall/cause I been through it all). But at the end of the day, I don’t care that much for overwhelming electronica.

Darkness Into Light: (***) A rock themed piece, which has a decent tune, but is fairly unclear as to who he’s talking about or where he’s going. Some pretty heavy duty beatboxing, though.

Thunder: (***) Conversation between G-d and man? That’s my read into it. But again, with all the computer stuff, this song takes some beautiful lyrics and kinda loses them to the programming. I’d like some more music here to present the theme.

Silence: (****) Gorgeous song that reminds me of the Breslover custom of Hisbodedus – the conversation between us and Hashem. It’s raw, and presented as such – the straightforward guitars and natural voice, along with the simple percussion makes this a haunting ending for the album.

Tachlis: A lot of Matis’ old fans will be disappointed with this offering, but that’s life. Artists move on. But the thing I didn’t like most is the lack of musical development in songs – meaning, there aren’t many solos or moments to let the lyrical message sink in. It’s just about always vocals versus computer. At the same time, I think there will be a lot of people who will be inspired by his struggla/me nah give up theme. And depending where you are holding, and depending on why you listen to his music, will be what you take out of it. At the end of the day, I’m going to give it three stars – it’s not that fun to listen to straight through, but many of the songs stick out nicely by themselves when they play randomly off your Ipod.