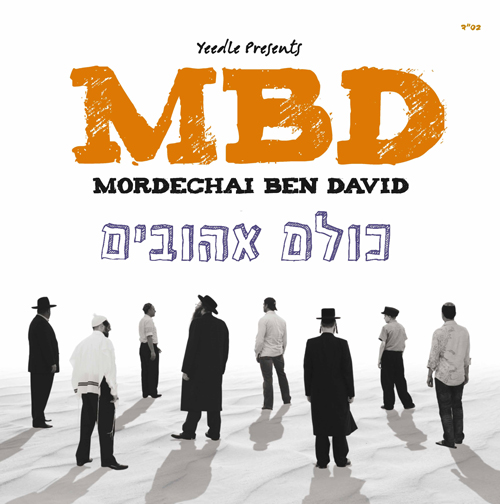 Mordechai Ben David. The undisputed king of Jewish music. You can bet when a new MBD album comes out, we all sit up and take notice.

Well, sit up and take notice, because MBD is still at the top of his game. If you’re a die-hard MBD fan, you don’t have to bother reading this review. Either place your order online right now, or stop what you’re doing, go out to your local Judaica store and buy the CD. You won’t regret it.

For the rest of you, read on.

And all you aspiring singers out there, pay attention. There’s a lot you can learn from this CD.

For starters, Kulam Ahuvim is MBD doing what he does best: being MBD. He knows what he does well and he sticks with it. The songs are all very well suited to him, probably because he wrote six out of ten of them. (To make all our lives easier, I only specified the composer in my song-by-song-breakdown if it WASN’T composed by MBD.) I find the idea that Yeedle produced this CD quite entertaining – not because it isn’t well done, but I would have loved to be a fly on the wall when they were recording vocals. Can you say to your father, who also happens to MBD, “Ta, can you sing that for me again, and this time try to make it sound more like this?” I would love to see what Yeedle can do as a producer with someone else’s CD.

A lot of shining spots on this CD. Some great songs, which I’m sure we’ll be hearing over and over again. The top notch arrangements, which are fresh and very up to date, make this album both classic and current at the same time. Moshe Roth’s choir is so well suited to this type of music – I have never enjoyed them as much as I did here. I didn’t quite get the cover. I would have thought that MBD would have gone for something more sophisticated, but obviously, this was the feel he was going for. Perhaps as a more mature singer he wanted to make sure the album came across as fresh and current.

Enough discussion. You reading this review because you want to hear about the songs. Right? Let’s go. Tachlis time.

Kulam Ahuvim: This upbeat song with great lyrics sets the tone for the entire album. This song has the word “hit” stamped all over it and you just know you’re going to be hearing a lot of this one at weddings. Love the little bits of violin at 0:48, 0:50, 0:55 and 0:57. Moshe Roth’s choir adds just the right touch and Mona Rosenblum’s arrangements really make this song great.

U’veyerushalayim: Slow, pretty song arranged by Aaron Razel with off-the-beaten-path-lyrics from Yeshaya. I’m sorry, I know that this is going to be the musical equivalent of apikorsus, but when I keep hearing the word “u’v’yerushalyim” I still keep thinking of Yosef Chaim’s song Yerushalayim, which I just loved. Love the way it sweeps into a different sound at about 2:05. Love the final “anachemchem” by the choir at 5:17. Very nice!

Im Eyn Ani Li: A fun energetic song you can expect to hear at weddings, with terrific arrangements by Ami Cohen. Love the echoes on “aymasai” starting at 3:06. Are those castanets I hear in the background? Great falsetto at 3:43.

Es Achai : Maybe I’m just not getting this song, which was composed and arranged by Aaron Razel. Maybe it’s the lyrics which seem completely random. I’m just not connecting with them. Is there a bigger message here that I’m not getting? We’re all supposed to be looking out for our brother? Don’t really know. All I know is that when I hear this one, I’m picturing a small room, somewhere in Eretz Yisroel, with dim lighting and I smell grilled chicken, cumin, chumus and hot laffa. (Not a bad picture now that I think about it.) Again, loved the choir in this song, but I definitely would have ended it sooner.

Loy Iro Ro: This fast song, arranged by R’ Suki Berry sounds like something you’d hear bochrim singing in a yeshiva. Which explains why the choir is composed of bochrim from Yeshiva P’er Moshe. Not a bad song, but not as good as some of the others on this album.

Ki Elokim: Without even looking, I knew this slow song was a Yossi Green composition. It just has that sound. Does Green sing on this song? There were a few seconds here or there where I thought I heard him, but he isn’t credited with any vocals.

B’Inyan Ha’Simcha: Ok, I just LOVE this fun song, composed and arranged by Aaron Razel. I’m also assuming that the other vocalist in this song is Razel, though it doesn’t mention it anywhere in the booklet. Everything about this song works, from the off-beat lyrics from R’ Nachman of Breslov, to the arrangements, the vocals, this song just rocks! I’m hoping to hear it at every single wedding that I go to. It’s that good.

Moidim: Wish I had learned Yiddish somewhere along the line, so that I could really understand all of Lipa’s lyrics to this song. It’s a pretty song, but it’s hard to really connect with a song when you don’t understand the words. Yes, I read the English, it’s a great concept and very timely, but I wish I got all the nuances of what I’m sure are beautiful lyrics.

Omar R’ Akiva: A chassidishe rock song? Cool! I wasn’t the only one who noticed that “avinu shebashamayim” part was very reminiscent of Lipa’s hentelach, in more ways than one. Love the way he fit in the words “af Hakadosh Baruch Hu”. Very much the way my father said they used to fit the words in back in Europe when he was growin up. This great song is composed by Harav Shlomo and Dudi Kalish.  (Thanx, Ari and JMMaven!)

Im Yihyeh: Nice slow song, arranged by Mona Rosenblum. Again, not a bad song, but not one of the stars on this album. I’m not sure I understand why the ending to this song is so long.

In short? This will probably be one of the best albums to come out this year. Go out and get it.