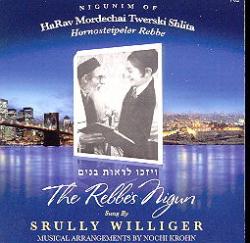 We get so caught up in what’s new and hot,  we forget that newer isn’t necessarily better.  Case in point:  Srully Williger.  Boy, can that guy sing.  Srully Williger is like potato kugel.  Really good potato kugel.  The kind that you sneak an extra piece of when no one is watching.  It’s not fancy, it’s not haute cuisine, but it’s the real deal.  Hartzig, geshmak, oozing with Yiddishe ta’am.  While voice teachers recommend singing from your stomach, Williger sings from his heart.

Go through your collection.  I bet you have some of Williger’s stuff.  Sure, we’ve all heard Niggun Nevo and Hu Klal, but Srully Williger has been one busy guy.  Two Carlebach Shabbos Davening albums.  A Rosh Hashana album.  A Yom Kippur album. Eight solo albums.  Two joint albums with Shloime Dachs.  His Kol B’rama on HASC 17 was simply breathtaking and his rendition of Shlomo Carlebach’s Hashem Oz at that same concert was, in my opinion, even better than Carlebach’s.  And if you think Williger is only good with the oldies, check out his 18 Year Tribute to Performers on HASC 18 which proved that Williger is keeping himself current.  His imitations of Jewish music’s best including MBD, Avraham Fried, Lipa Shmeltzer, Piamenta and others were dead on.  His Srully Williger Orchestra has been playing at simchos everywhere.  Oh and in his spare time, you can probably find Williger spending time at a hospital, singing for the sick.

My first reaction after listening to The Rebbe’s Nigun was to pull out my copy of Hakadosh Baruch Hu… Chesed and give a listen.  A few of the songs on that CD really blew me away.  Pinky Weber’s Yashov is just gorgeous.  Williger’s kids join him on Neiros Shabbos.  Wow!  Where has he been hiding those kids?  I would have loved to hear even more of the Williger boys.  And Niggun Nevo?  It’s worth buying Hakadosh Baruch Hu…Chesed  for this song alone.  All these years we thought Srully Williger’s trademark song would be Hu Klal, but maybe not.  The only fault I can find with this Shlomo Katz composition is that it inspired too many singers to try to come up with a signature niggun of their own.  With the possible exception of Eitan Katz’s The Dmin Niggun, none have managed to even come close to emulating Williger’s success with Niggun Nevo.

Author’s Note: Every now and then I get a comment asking if I am a music industry insider. Clearly this post will indicate that I most certainly am not. No one in the business could have made the mistake of not realizing that Shlomo Katz not only composed Nigun Nevo, but also sang it on his Vehakohanim album. Thank you to all the loyal fans who were quick to point out my mistake. My sincerest apologies to Shlomo Katz for not giving credit where credit is due.

Back to The Rebbe’s Nigun, a collection of songs inspired and composed by R’ Mordechai Twerski, the Hornosteipeler Rebbe, who wanted to share his heartfelt niggunim with the rest of us.  While the name R’ Twerski may be an unfamiliar one, his compositions are not.  Lev Tahor’s Im Eshkacheych?  Williger’s  Al Chomosayich?  Both of these terrific songs are R’ Twerski’s songs.  Williger is joined on several songs by R’ Yoel Yitzchok Wolhendler, R’ Twerski’s son in law.

I will tell you right now, I wasn’t quite sure what to expect from this CD.  The title alone conjured up thoughts of guys in long beards singing old, dated niggunim.  I was very pleasantly surprised.   I found this album to be full of warm, inspiring niggunim that gave me that feeling of going back home again.  The accompanying booklet is tasteful and appropriate, but not overdone.  The cover and back are beautiful and classy, while the inside isn’t a tribute to either Williger or R’ Twerski but a simple listing of songs, lyrics and credits.

Make no doubt about it.  This album, arranged by Nochi Krohn, is not a CD that is trying to change the face of Jewish music or take Jewish music where it’s never gone before.  This is old school.  Takes you back to a time when music seemed to be your hearts way of expressing itself instead of trying to up the ante.  Does that make it old fashioned?  Dated?  Nope.  Not at all.   If you like old school, this CD is a solid pick.

Ok, now for the actual review:

V’yizku Liros Banim – This is a great choice to open up the CD as this song gives you a good feel what to expect from this album.  This song is catchy, leibidic and a great choice for a wedding playlist.  (You listening, JM Derech?) Love the strings in the intro.  Anyone else hear Devil Went Down to Georgia?

Ayn K’Elokeinu – A slow kumzitz-type song that just gets in your head and stays there on repeat.   I can imagine this song being sung over and over again either Friday night or by Shalosh Seudos.  A great song for Williger and I love it.

Yehei Raava – Because of the lyrics, this song strikes me more as something you’d hear in Shul than at a simcha.  With different lyrics, could be completely different and far more versatile. I’m imagining this as a moving V’Liyerushalayim Ircha.  Once I switched the lyrics in my head, I found myself really enjoying the high part of this song.

Kavey – Nice.  Simple song but it just works.  Great harmonies.  Like Williger’s harmonizing himself on the high part instead of using the choir.

K’vakaras –  Both this song and Yehei Raava are not songs you’re going to hear on your typical wedding playlist.  At least for me, these are songs you’d be hearing in Shul, either on Shabbos (Yehei Raava) or during the Yomim Noraim (K’vakaras).If you like Williger’s Carlebach series or davening series, you’ll enjoy these.  Makes me think that if not for the fact that my husband davens for the Amud on Rosh Hashana in my Shul, I’d love to see Williger up there.  Bet he is an inspiring Baal Tefila.

Der Rebbe’s Niggun – I’m surprised I haven’t heard this one being played anywhere.  It is quite good and the harmonies give it a really full sound.  Love the Celtic sound that creeps in at about 1:53.

Sameach – When I spoke with Williger about this CD and I told him one of the songs reminds me of the wedding scene from Fiddler on The Roof, he knew exactly which one it was without me specifying the song.  Is it all the horns?  Either way the arrangement is clearly meant to take you back in time and it does just that.

Zochreinu – One of my all time favorites, though I’ve heard it with different lyrics. I would have lightened up on the arrangements and kept it as much voice as possible.  Sweet.  Simple.   Close your eyes and sing your heart out with Williger, who is at his best on this song.