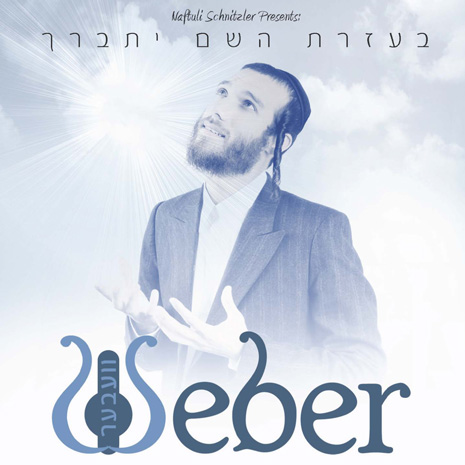 Only recently I realized where I had seen Beri before. I found a video of last year’s Kumzits on The Hudson where Beri sings very lebedik, and I remember thinking “I hope this guy comes out with an album”.  He has such Chayus and Freilachkeit in the way he sings his songs.  It is very soul warming, I’m glad to see a beautiful product.  It was worth the wait.

I’m sure you will hear people say, he sounds like Lipa, he sounds like Shloimi Gertner, but the truth is, he sounds like Beri and Beri only. You might hear a bit of another singer when you hear the CD at first or maybe second time around, but once you have heard this album several times you come to realize that Beri has his own style and I can see him becoming the next big thing. (Any one for a Bigger Event? Beri, Lipa, Gernter, MBD, Dedi… ok, I’m just dreaming here, but it would be nice!)

Lately we have seen several new Chassidishe singers, starting with the trend setter Lipa.  Many have followed, just to name a few: Shloime Gertner, Shlomie Daskal, Yisroel Werdyger, Yossi Mayer, Shloime Taussig. They have added a lot to the Jewish music market and have all put out amazing CDs with great quality music and songs. Looks like there are some more stars rising.  There is place for you all, hop on in! We are all thirsty for good quality Simcha.

Let’s start going through the songs, I am not a fan of rating a song in *stars*, so I will just go through track by track writing my thoughts about that song, I will leave the rating to each and every one of you, readers. Hold on tight, you’re in for a good ride.

Be’ezras Hahem – The title song sets a nice beat to this album. A song composed by Beri himself, music arranged by Naftuli Mendlowitz. This song has a very pleasant yet up beat tune. The children’s choir is very well mastered by Eli Gerstner & Yossi Neuman, not to forget the harmony throughout the song by the Shira Choir, where Beri himself is also part of, performing all over  (chabad telethon, Miami, London among other places). It’s not the song with the most words in it, but still a good song.  A nice Touch in the booklet is where you can see Beri writing B’H on the top of a vintage looking letter.   (I’m guessing that is what it’s supposed to be.)

Chayim – Just to keep the beat up a bit here you have another fast song. This song has a very nice musical arrangement, by no other than MONA himself. One musical feature that has to be put in the spotlight is the piano played by Yaron Gutfried, it is skillfully integrated into the song, and it can be heard at 1:45 very nicely. This song has the Chayus to it, to live up to it’s lyrics “Gedolo Torah Shenosenes Chaim” (Great is the Torah that gives Life).

Avinoo– Here we slide into the slow lane. I like the way this song goes from the low part to the high part – it’s beautifully done. Beri’s vocals also sound very good in both parts. The song is a bit on the longer side, just over 6 minutes. I know the song is composed by Lipa, and yes it is a good song, but it will just not qualify as the best song.

Rekidale– The tunes and the lyrics are a very good match again, a very Freilach song composed by Motty Ilowitz. Motty is having an immense impact on Jewish music, with great lyrics and songs that he has composed and written for various singers.   I have also heard him sing himself very nicely (I wonder if he is coming out with an album himself). Nice Saxophone solo @3:45 followed by some Shtick that ends the song very nicely.

Shabbos Hi – A very Hartzige Song Composed by Aron Y. Spilman with beautiful lyrics by Motty Ilowitz. The Piano starting of this touching melodious tune then blending with the violin begins this childs story. The child soloist in the beginning of this song gives a great emotional touch, as if you are hearing the story from the one it is happening to. The Child asks “Ven Hob ich shoin a Refia” (When will I have a recovery) and the child is answered “Vein Nish tei’er Kind, Di Vest IY”H Zein Gezint” (don’t cry dear child, you will IYH be well). From there the song goes on to ask from the almighty “Tate” that  Klal Yisroel is waiting for the ultimate Yeshua. The choir ads a very nice and soft touch to the song. “Gut shabbos Alle Yidishe Kinder Un A refia Sheleima” with the Yom Shekulo Shabbos – Omein.

Der Weiber – (that is how  I would spell it not “Der Vaiber”) Der Weiber is hands down my favorite song on this album, it has the modern beat that you can find yourself singing along to. This Song has Lipa all over it and I’m loving it. I heard Lipa on the JM in the AM when Beri was being interviewed by Nachum Segal, Lipa said that he could have used this song for his own album as “Ver is de Schmelter” (who is the welder) which is also mentioned in the same Tefila of Yom Kippur. Who knows maybe one day we will hear the Lipa Version of the song. The arrangement by Shai Bachar is amazing to say the least.
The picture in the booklet of Beri, weaving with great concentration is hilarious. Here I will also mention the quality of the booklet that comes along, when you buy the CD (or download). Every track has an other picture of Beri doing something related to each song.
We have seen several artists now that have name related songs, and I think that is a very cute touch. We have heard it in Legabay by Dovid Gabay, R’ Mayer Omer by Yossi Mayer and Pruzbul by Michoel Pruzansky. It’s nice to see how they reference their name to a Torah source.

Vhaarev Nu The song starts off with a childrens choir.  To me the message is, we have to teach our children the Torah in order to keep the Torah’s flame alive. A very nice flowing song, not a slow song, but then again I would not call this a very fast song either.  Maybe this song was placed after “Der Weiber” to just calm you down a bit after such a great song. At the songs end we get right into the learning “Tuni Rabunon, Huben Rabunon Gelerent”.
Just an observation: The picture in the booklet could have used different glasses (from the Weber photo shoot), you could have borrowed Lipa’s!

Yehi Rutzoin Here is a piece of the Selichos Davening, where we ask Hashem to hear our crying voice and save us from all evil. The start of the song has a bit of a Shofar sounds to it, but from what I can make it out to be, it is a trumpet. This tune is for sure to give you the Slichos feeling.

Hinei Put the volume up! We have some Sephardi style music (Mit a Yidishe Ta’am) to get you up on your feet. We are entering a new week, and we know for sure we will have one filled with good and Mazal.Check out 2:13, now that is some talent! @2:48 we hear the choir cheering on, Kumzits style! I had to play this song again, I was not done with my dance, so here we go again “Siman Tov Umazal tov” (as I’m writing this review it’s Motzei Shabbos, putting me in a good mood!)

Chazak In this song you can hear how soft Beri’s voice is. The choir does their job very well, but the song itself is not one of the better ones of this album, you will always have songs that are not bad at all, but they are not what make this album special. A filler if I may say, but a good one.

Beiloikim This song got its earlier release in the music video that was brought out. I’m not the biggest fan of the music video itself, but the tune is a good one. The music is full of energy, boosted up with some electric “auto tuning” that gives the song a very modern and up to date feeling. @ 3:20 we take the song up one notch, after that the sax shows us again what it has in store, with just another great solo.

Ten Be At 2:45 Beri tells the story of the “Heilige Maharam Shif” how he begged Hashem for the strength to be able to learn Torah, and he grew to be the Holy Maharm Shif.  So too, when we are in a difficult situation, we should call out to our “Tatte” to give us Koach. I like the way the story is integrated into the song, the music keeps playing and you can hear the choir in the background, and what I like most is how Beri ends off the story with the “TATTE” that gets you right back into the song. I’m usually not the biggest fan of story-time during songs, but it is so “Beri” well done that that I was drawn right in.

Mi Mi Mi A very catchy tune, that could easily get stuck in your head. Its nice to see the choir joined by some children,  not your usual choir. At 2:44 you will hear other “auto-tuning” well done.

Jerusalem Our Home This song is composed by Beri himself and is a very relaxing way to end a good album. Beri has said this to be his favorite song (on the Nachum Segal Show). It starts of without any words but just a sort of Nigun. A 2:40 the words star trickling in “Aheim villen mir gein” (No more crying, Tzaros should all disappear, we want to go home, build our house in Jerusalem, with a smile we’ll walk around.)

Overview: If you do not have this album yet, get up and run to the store to get a copy of this Album, or better, don’t get up, Just get the download version from MostlyMusic.com and save yourself a couple of dollars.