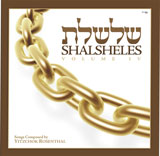 Ok, everyone. Take a deep breath and relax. Neither Shalsheles nor Shalsheles Jr. are planning on disappearing from the Jewish music scene any time soon. This is not rumor or speculation, but word that comes directly from Simcha Sussman.

Shalsheles Jr., directed by Sussman, is currently recording their second full length album, which they hope to release in time for Chanukah. An associate director will continue to steer the project along after Sussman’s move to Eretz Yisroel. The album will feature around ten songs, one of which may be a remake of an older English song.

Sussman assured me that his move will not affect Shalsheles’ adult group in any way. With today’s technology, there is no reason that all recording has to be done in the same studio. Given that Shalsheles has never been a group that does many live performances, there is no reason Sussman couldn’t fly in and join the group as needed. While there are no specific plans for a new Shalsheles album, they are, iy’H, planning on putting out another album, possibly even for Chanukah 2010.

On behalf of the entire JMR family, I’d like to wish Simcha Sussman and his family much hatzlacha on their upcoming move.