New Album: Dance all Night with the Shloime Dachs 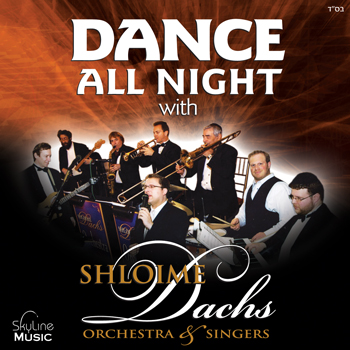 For the past 2 decades, Shloime Dachs has dazzled audiences all over the world with his magical voice & warm personality. In addition to his 5 solo albums, he has sung at hundreds of weddings over the last 20 years. Shloime started his own band several years ago & has become one of the busiest orchestras in the business. He now returns with an exciting & creative wedding album entitled DANCE All Night! with Shloime Dachs Orchestra & Singers, produced and arranged by Shmuli Rosenberg of SkyLine Music NYC (www.skylinemusicnyc.com). It features 80 Minutes of non-stop music with special guest vocalists Yacov Young, Shaully Waldner, Dovid Dachs and introduces for the very first time Yoni Zigelboum, a new young rising star with boundless energy and a breathtaking voice. There is also a surprise debut appearance of the one and only Nachum Segal and ends with a bonus track of Shloime Dachs Orchestra LIVE at a wedding. This is a wedding experience second to none! Disributed by Sameach Music. The album will be in stores by the beginning of next week.