When Is A Song More Than Just A Song? 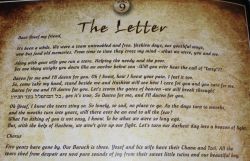 If you’re reading this blog, you probably love music. You probably have it on all the time. In your house. In your car. It’s something we listen to, maybe even sing along with. It has the power to take us so many different places and can affect us in innumerable ways. But no one ever expected a song to inspire over a thousand people to sign up to say Tehillim every day for total strangers.

The song? The Letter, from Dovid Gabay’s Omar Dovid.

In Dovid Gabay’s own words, “The message in this song is so powerful, and a vital message that applies to so many today that I felt it necessary to bring out this Chazal and show people there just may be a way out of their adversity if they just would daven one for another. The Letter comes as divrei chizuk for people experiencing any type of tzarah.”

Someone out there took both the song and Dovid Gabay’s message, to heart.

davenforme.org was started approximately six months ago, by an anonymous businessman, Mr. X., who was in need of a particular yeshua. Inspired by Dovid Gabay’s song, Mr. X. decided to put the words of the Gemara into action. Mr. X. founded an organization that would pair up people in need of the same salvation to daven for each other.

There are five different categories of yeshuos that a person can daven for: illness, childlessness, shidduchim, hatzlacha with children and parnasa. After signing up for a specific category, you are paired up with another family in need of the same yeshua, and both families are assigned five perakim of Tehillim to say for each other. Some families have requested to have their anonymity maintained. Others have specifically requested to put in touch with their partner so that they can be supportive of each other during what is obviously a difficult period in their lives. Each family also receives a CD containing the song “The Letter”.

As of this writing, davenforme.org has approximately one thousand members signed up and is finishing the entire Sefer Tehillim thirty three times each and every week. By the time you read this post, the numbers may, in fact, be higher.

Just imagine. A simple song. Four thousand, nine hundred and fifty perakim of Tehillim being said each and every week, for total strangers. The numbers are mind boggling. The idea that a song could inspire someone to undertake a project like this is just astounding.

To quote Dovid Gabay, “The outcome of the song has surpassed my expectations. I hope it continues to inspire others across the globe and gives chizuk to whoever needs it.”

For more information, or to sign up, go to davenforme.org.