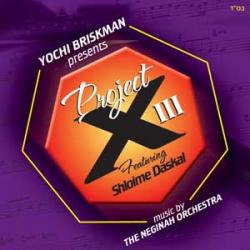 Okay, arrangements by the Briskman’s, Vocals by Shloime Daskal and the Shira Chadasha Boys Choir, and music by the Neginah Orchestra. What more could you ask for, right? All we’re missing is someone asking if we would like fries with that. With this all-star cast, how can we go wrong? For me it went wrong when I didn’t see enough of the new songs. I was reading the list and I kept seeing names of different chassidish sects. (Breslov, Skulen, etc.) No there is nothing wrong with a good piece of chassidic music, but don’t abuse it! Hey, but that’s just me, perhaps you love the fine art of chassidic music. So much, that you want the majority of the 35 songs to be them. Enough “blah, blah, blah”; time for some tachlis.

Tantz Section
Ach Tov – Belz/Shlome Kalish: Very cool intro, where is this from? Would be nice if there was more of a booklet. A very hartzig song, and a great pick to get a chassuna on it’s feet.

Nigun – Chabad: You can never really write up much about a nigun. What I can say is that Daskal shows off his vocal range in this song, which in case anyone is wondering, is very high!

B’zee Hashu – Avraham Fried/Pinchus Weber: A good song to continue the first dance style. Not much to it, but it’s something.

Ashrei Mi – Belz/Lazer Kalish:Every time I hear this song my ears perk up. It’s a great song and Daskal does an incredible job with it. It’s good that the “booklet” if you can call it that, tells me who the original composer was. Now, if I hear it at a chassuna and the guy sitting next to me says “I love this song, who’s is this?” I can respond “Are you kidding? Everyone knows it’s a Belz niggun from Lazer Kalish.” Right, cause everyone knows… =D

Veaynainee – Skulen:Another song I hear all the time and can’t place my finger on where it’s from. If you have a random guy come up to you at a chassuna saying “This is a Skulen niggun” that’s me!! Well…lav dafka (not necessarily).

B’cho Rabeinu – Breslov: The first dance continues on. My feet are getting tired, when is it going to end? Hey at approximately 1:12 in the song they start clapping; cool! That’s chassuna realism at it’s finest.

Poseach Section
Poseach – Shloime Daskal/Yitzy Waldner: Whoa…not cool. I thought they were about to play Chosson HaTorah, and they faked me out of my pants (shoulda worn that belt…). Don’t worry, two tracks later Chosson HaTorah comes back for real. Anyway, Daskal sings this hit song from his latest album to it’s fullest. It’s a short and sweet version of the real song.

Hagomel – Dovid Gabay/Yossi Green: I still think it’s funny that there is a song made to the words Hagomel. The Shira Chadasha Boys Choir, everyone’s favorite choir to throw on their albums is back! The harmony at approximately 0:33 is a very nice touch. Would have liked to hear that on the original Hagomel. You hear that Gabay, ReMix time! The way Daskal sings “Selah” makes me cringe a little bit. You can decide for yourself. =D

Chosson HaTorah – Baruch Levine: The Chosson HaTorah music is back and the good news is that this time it’s not going away! It’s only a 1:54 long compare to the 2:11 Poseach. Do I sense favoritism here? =D. You can’t go wrong here with this song; besides they have the same choir from the original. I still think Levine does it better, but Daskal definitely does an amazing job!

Kol Mevaser – Moshe & Sender Mendlowitz: Never heard this song before. Could be there’s a reason to it being 1:11 long. A filler? Eh, you win some, you lose some.

Nigun Baba: I love the “yum bum ba” part of this song. It’s a cool niggun.

Hentelech: Whoa, faked me out again… Thought they were going to play Asher Yatzar from Lipa’s latest album, A Poshiter Yid. By the way, I hold of Asher Yatzar way more than Hentelech. I’m not exactly sure why people are in love with that song, but hey! a hit’s, a hit! The switch back and forth between the Asher Yatzar music and the choir chanting “Tatte in himmel” at approximately 0:56 in the song is very shticky.

I’m not going to review this section, because I don’t have enough of an appreciation for the chassidishe accent.

You know what! I will review a song! Actually, I do enjoy this last song. It’s a very nice back and forth song. Daskal says his part of his song and the choir replies with theirs; what achdus!

Hora Section
Horachamon – Shloime Daskal/Moshe Wertzberger: Everyone loves a good hora! What better hora to start off with than Daskal’s Horachamon from his latest album. I really enjoy the chorus of this song; I feel like taking 3 steps to the right and kicking my feet each way while dancing fast paced in a circle. Hey! I guess that’s why this song is in the hora section.
Kumi Roni – Breslov: Doesn’t feel like there is much to this song; almost as if it’s a continuation to the last song. In other words, a song to keep that hora circle going. Everyone needs a filler!

Moshiach – Miami/ Yerachmiel Begun: I’m sorry, what? How can you put a boys choir song in and not have any child soloists? Not only that, I have to hear the men’s choir sing half of it. No, I have nothing against men’s choirs, however, this is a song meant for children, let’s hear more of them! If you’re going to put any men or man for that matter in this song, it should be Daskal; where is he anyway? 0:38 long, I hear that.

Lev Echod – Yeedle/Aaron Razel: Wow! Gorgeous! I didn’t think a copy could be better than an original, but Daskal just proved that theory wrong. Do not miss the harmony by the Shira Chadasha Boys Choir lasting from 0:38-0:42.

V’aldoh – Baruch Levine: Anyone else get that “I’m stuck in the middle of a carnival” feeling every time they hear the music to this song? =D. Once again he disproves my theory; I enjoy Daskal’s version more than the original. The power of Daskal’s voice blows you away in the chorus.

Moshele’s Nigun – Yehuda Green/Moshe Shur: This niggun is gadlus. There’s not much more I can write about this song. You have to listen to it for yourself. If you appreciate a good niggun, this is one you have to hear. Starting at 2:16, a must listen for this song.

Al Chomosayich – Acheinu/Yochanan Shapiro: An Acheinu song! If you missed my review on Acheinu 3 check it out here. I happen to have loved this song as it was. Now, I’m thinking Acheinu should have invited Daskal over for the original recording. At 1:52 Daskal switches to a chassidish accent, and I don’t mind it a bit. That’s means a lot coming from me!

Shelo Osani Goy – Lipa Schmelczer: Ha ha, love this song! Take a great song and add the power of Daskal’s voice, what do you get? Nothing but greatness.

Bayis Ne’eman – Sruly Werdyger/Mutty Illowitz: Took this one off of Sruly Werdyger’s debut album, Bayis Ne’eman. It’s a great song and the choir does a lot for this song. Daskal harmonizes with himself in this as well, and it’s something you’re going to want to keep coming back to.

Amalel – Yeedle/Mona Rosenblum: Amalel, from Yeedle’s latest album, Lev Echad. Only thirty-four seconds long, yet still great. Daskal only covers the high part of this song, but it’s perfect this way. This ladies and gentlemen is what you call a perfect transitional song. It takes you from one longer great song to another, without allowing you get bored.

Ich Hob – Shloime Daskal/Adi Ran: Another song from Daskal’s latest album. This song is very shticky. He switches back and forth between a chassidish accent and a sefardi accent. Guess that’s what happen when you mix Daskal and Adi Ran.
Shalom – Baruch Levine: Another Baruch Levine song! This is a really “cute” song. However, because of it’s “cute” style, I think it should stay with Baruch Levine. He has the voice for this type of song. I would have liked to hear a solo from a child in this song. Hey! Where are the child soloists? I’m only hearing them sing as a choir. One thing you can not miss in this song is from the way this song goes out. At approximately 2:11, Daskal takes this song out beautifully.

This is the final section of the album, it’s mostly instrumental and is filled with clarinet and guitar. Chilik Frank is on the Clarinet and Menachem Herman is on the guitar.

In Miron: As I said before, there is a lot of instrumental in this section, and this song shows off the different techniques of the clarinet and guitar. However, at 1:01 in the song Daskal demonstrates his range, and it’s quite impressive!

Patch Tantz: Entirely Instrumental, with some adult choir added in.

Nigun Breslov: Go to 1:01 in this song for a very shticky piece by Daskal.
Chusid’l in Dm: Entirely instrumental.