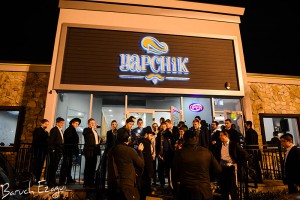 @SPLASHNEWSUSA : LAKEWOOD, NJ- Just before the release of his brand new albm “Kol Haneshama Sheli”, JM superstar Benny Friedman made a surprise visit to Lakewood. Although there were wisps of rumors floating around the city, it wasn’t until a few hours before the event that it was made known- Benny Friedman together with producer Sruly Meyer will make an exclusive appearance at the famous Yapchik hot spot. Large crowds of Benny fans of all ages were waiting outside the store for his arrival. This was their chance to get up close, schmooze, share some cholent, and of course, take a selfie with Mr. Yesh Tikvah himself. After Benny made his entrance, the music started up and we were treated to a first listen to the new album. While everyone was getting their collector’s item “Kol Haneshama Sheli” album cover cookies, Benny sat down for an exclusive SPLASHNEWS interview.
SPLASHNEWS- What are your expectations for this album?
Benny Friedman- My expectations? To sell a million copies.

SN- What’s your favorite song on the album?
BF- I don’t know, that’s a tough one.

SN- What’s your favorite song on the album?

BF- It doesn’t get any easier if you ask it again! :) There are a lot of great songs…

SN- Did you feel the need on this album to get a song that will match/top Yesh Tikvah?
BF- No. Yesh Tikvah was a miracle. Miracles on demand are a lot more difficult. The only responsibility that I felt was to make a good CD, make music that people like, make sure it’s good. That’s it, what else could you do?

SN- Did you at all try to figure out the science behind Yesh Tikvah and try at least to match the energy that is found in that song?
BF- We did not. Just because we felt that if we’re gonna try- we’ll fail. Really. Yesh Tikvah was like lightning in a bottle, you just can’t replicate that. We decided (for this album) we’ll do what we can and hope for the best.

SN- How many songs did you listen to before you chose these 12 songs?
BF- A LOT! It’s a very tough process. We went through hundreds and hundreds of songs. Possibly even over 1,000 songs. After taking a break for the Shabbos Album, It took us about a year to produce this album.

SN- You advertised this album as a “continuation” of the Shabbos Album. What did you mean by that?
BF- The energy of the Shabbos Album is that it’s a geshmake album that you can listen to again and again. You don’t get sick of it so fast. That’s what we’re trying to do over here. Not trying to be too fancy; trying to make it nice, pleasant, and geshmak.

SN– Many hit songs last only for a short while and people quickly get sick of them… How do you fight that?
BF- I’m not sure what the secret is but I think that’s the idea- not trying to be too fancy and not doing things for the sake of doing things. Just make it sound geshmak. If it sounds geshmak, why are you gonna get sick of it? If you’re trying to come up with a “kuntz” or a chiddush etc. yeh people will get sick of it. Shock value only last so long. How many times can you listen to the same joke? But if it’s something really geshmak….do you get sick of a piece of chocolate? It’s geshmak! It’s not gonna change or lose it’s chashivus.

SN- Can we expect you to sing your new songs at HASC this year?
BF- Of course! I’ll be singing them already at my Chanukah shows but there are 12 songs so at HASC it may possibly be the first time I’ll sing a particular song.

SN- Let’s switch to the Eli Marcus album. What are your thoughts?
BF- I am very looking forward to it. I heard some stuff from it and Eli’s voice is gorgeous and its got some great songs. A lot of Yossi Green songs. Great, great stuff. He’s very creative, very talented, he worked with Shai Bachar and he’s got very interesting stuff.

SN- Do you remember that first concert you (professionally made up and singing as Avraham Fried) ever did in Camp Romimu?
BF- Sure! My first ever show. The campers were fooled. That was crazy times!

SN- Any final thoughts?
BF- Final message? No way! There is no final message. Talk to you again soon! I was in Emporio trying to return a shirt that I bought. It was a sale item and the guy told me “sorry, that’s a final sale”. I said, “I don’t think you want this to be your final sale!”