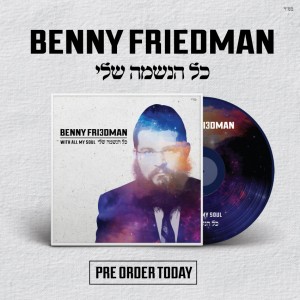 Benny’s back! And how! Let’s talk a quick jog through an album of striking fun and poignancy.

Toda: **** Benny walks us into his new album with a solid opener. A light guitar over an electro-beat brings us into his golden voice. The lyrics (the subject being quite obvious by the title) are mostly in Ivrit, with an English section towards the end that borrows a bit from a slightly ghetto melodic lilt. I’d say it needs higher arrangement on the mix, as the horns are pushed aside by the bass and beat. The focus on “You” in the English chorus calls to mind R’ Levi Yitzchak Berditchever’s “Du”.

Im Ain: ***** Oh yeah! A criminally under-appreciated song gets new life and is sure to thrill a younger generation that has never heard of the incredible drummer and vocalist Isaac Bitton and his Raya Mehemna. This rocking rock hit is played faster than Bitton’s version (faster even than the first recording of it, “Superman”, from his pre-BT band Les Variations). But Benny and guitarist Bentzy Marcus deliver an arrangement that deeply respects, and even borrows from, those brilliant originals, while adding slight creative twists. Great selection for this album; an excellent, respectful cover.

Ribono Shel Olam: *** The lazy trumpet that begins this number is in stark contrast to strength of the previous tunes. It doesn’t do justice to the pretty melody that follows; nor to the gorgeous words of Tefillah that it contains. (Benny seems to pull out some of my favorite Tefillos – thanks!) It’s here that I’ll continue my slight critique of the backup choir – again, like earlier albums, the sound is dry rather than full, and the harmonies are so focused on being creative that they miss or blur natural harmonies. Benny, on the other hand, belts out a powerful cross harmony at 2:51 that’s a masterpiece of its own. The song’s finale isn’t up to par, though.

Fulfill Your Tefillah: **** A techno bouncer that begins in the image of Yesh Tikvah. This one’s in English, though, with Yeshivish-like dashes and quotes throughout. A fun song, with funky harmonies led by Tzvi Blumenfeld. Echo effects give even more color.

Al Tira: *** Broad swoops of the conductor’s wand define this number, with the majestic French horn joining strings and a harp for a beautiful arrangement. Yisroel Lamm excels with his treatment of this beautiful melody. Benny himself reaches deeper as well; his vocals here seem to have a chestier, fuller sound that borders the cantoral. I kvetch with the stiff backup guys at 4:00; they get in the way of Friedman’s clear, controlled and clarion performance. They make up for it at the finale, though.

Kol Heneshama: **** In another successful recurring theme, 8th Day rejoins Benny for a salsa/jazz/hip hop hodgepodge that’s lots of fun. As can be expected from their previous collaboration, the song has all sorts of creative juices and flavors. Vocals strike contrasting perspectives; the highly percussive arrangements ebb and flow masterfully. The English bridge that crosses over to the airy South American reed flute has a light hip hop feel, and the trio has fun in the background as the song ends.

Lehisaneg: **** A zemer eminently worth of a Shabbos table, this Ari Goldwag composition moved me from the first time I heard it. The tune fits the rhythmic wording perfectly, allowing one to see its poetic beauty. And given the easy, pleasant, Shabbosdik tune, I only wish the choir was given a more Shabbos-table feel in its harmonic voice. No need at all for shtick, kumzits-type harmony would be perfectly fine. The children’s choir, on the other hand, is pitch-perfect. Next time this Zemer comes up on my table, I know which tune I’m using.

Bum Bum: ***** Bada-boom! Here’s a hit, designed in Pharrell style, but with content to the happiness. An immediate hit. The ultra-positive tune (a collaboration between Elimelech Blumstein and Ari Goldwag) is boosted by stellar arrangements, mostly guitar based. Warbling Hammond and fun percussives; cool harmonies over the solid beat; Avi Singolda’s bold solo; the addictively enjoyable Bum-Bum-Bum – you name it, they filled this song to the top with goodies. Add all that to the fact that it is almost pleading for more creativity; whether harmonic or instrumental. This, my friends, is a fun song.

Hamalach: **** Have these words been used for too many lullabies? At least eminent composer Baruch Levine slipped the words Hinei Lo Yonum to the chorus so it’s got something to differentiate itself from the classics. In any case, slide guitars amid the full orchestral sound certainly gives it something different, with an intriguing arrangement by Tzvi Blumenfeld. And Benny puts on a show to match, expressing both range and emotion.

Yesoid Veshoiresh: *** Out of the many seforim that have been quoted by singers across the range of Jewish music, I think this is the first from that true Chassidic magnum opus, the Tanya. I guarantee there are more such quotes coming from that heavenly work. In any case, the tune here is a ‘90’s power piece; a tune (by Pinky Weber) that shows its roots in classic Jewish music. What the backup vocals were doing at 3:20, I dunno, but Benny plays off it well. Still, that section could have been reworked, IMHO. Personally, I like the first half of the song far more than the latter half, at which point creativity runs too quickly into overdone. Oh well.

Essa Einai: **** Gorgeous duet with Shlomo Simcha in a gorgeous tune, composed by Rivky Brachfeld. Why didn’t I think of that match myself?! And the two voices blend seamlessly together, aided nicely by the Yedidim Choir. Kudos to Naftali Schnitzler on the keys – another job well done by the backing orchestra.

Rak Beyachad: ***** Another Ivrit power pop hit, this one by Eli Klein. Again, catchy as can be; a definite crowd pleaser. And this time, I have no qualms whatsoever with the outstanding work by the backing choir, Shira B’Simcha.

Now that it’s over, you’ll have to excuse me – I forgot to hit repeat.

Benny, you and your crew of composers, arrangers and musicians have outdone yourselves – yet another wonderful, wonderful album. Yashar Koach, or rather, Toda!