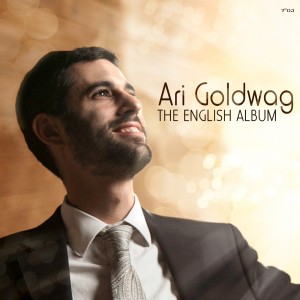 Every rookie in the JM Business should know by now about Ari Goldwag’s prominent part in Miami Boys Choir history. (Sorry, have to mention that- Fan’s right :)) That being said, I must confess that as a child/teen growing up (and still doing that :) on Miami, I preferred the sweeter voices of Yitzy Spinner and Oded Karity over Ari’s deeper, maturer voice.
Ari’s voice now is still deep and mature, but it has gained sweetness and clarity. I love the way he carries a tune so seamlessly and beautifully. He nails each song to perfection.
Onto the album!
There’s a lot of electric, acoustic and rock guitar all over the album. The album has a thematic feel of finding the light in these dark, trying times.
1) Something Different- (Composed by Ari)
The album starts with this pumping track. Ari’s voice is smooth and he glides through effortlessly.The theme of the song is about Hashem being with us in this confusing, empty world. The harmonies are spot on. I especially love the harmonies at the end of each line where it gets a little stronger. ( Sorrow, tomorrow, gladness..)
2) Angels Out- (Composed by Dror Kevodi)
This song is sort of a continuation of the previous track. The theme being about the darkness in our lives that can be banished with a bit of Shabbos Candlelight. The chorus is “There are angels out tonight, won’t you welcome them inside..” Very pretty ballad. At 3:08 Ari’s son Moshe Dov joins him, singing the chorus to the words “Shalom Aleichem Malachei Hasharos Malachei Elyon”. The song wraps up with “Good Shabbos, Shabbat Shalom”. My only complaint is the title of the song. It should be Angels in :)
3) Chanukah Light- (Composed by Ari)
This song is really short at 2:39. It’s a great rocky song with a message about Chanukah lighting up the darkness. There’re some awesome guitar on this track. Check out the Music video here https://www.youtube.com/watch?v=5oAbhwC8LZI shot in Times Square, where Ari feels the darkness is prevalent.
4) Your Smile- (Music by Ari, Lyrics by Leah Rubabshi)
This is a really touching, beautiful track. Ari starts off singing soft, getting more into it as the song progresses. The song is about a special child and how his smile lights up the world. Ari sings it with much feeling.
5) Up To You Now- (Composed by Dror Kevodi)
There’s an “Im Ein Ani Li” theme to this song. This is not one of my favorites on the album. The lyrics are very nice though. The bridge might be the best part for me with some rock guitar behind Ari.
6) Take Me Home- ( Composed by Miriam Israeli)
The track starts off with a beautiful piano. The orchestration is really really well done on this song. This song is about all of us yearning to go home to Eretz Yisrael. Ari nails this song.
7) Forever Dance- (Composed by Ari)
This is probably everyone’s favorite song on the album. I mean, who can resist Moshe Dov’s sweet vocals? He makes me smile. He really owns this song, singing the better half of it. It starts with some electric guitar and then transitions into techno. The intro reminds me of “Min Haolem” from “Am Echod”. (Happen to love that song) . The “Forever Dance!” at the beginning is reminicsent of “Nodeh ” also from “Am Echod”. The harmony is super, (though I find Moshe Dov’s a little overpowering) The “whoa, whowhowho” that MD does is soo good!
8) Teiman- (Composed by Miriam Israeli)
This song is a rather sad song about the terrible saga in Israel after WWII when Teimani children were kidnapped from their innocent parents. Ari sings it with a lot of emotion. There’s an accordian joining the second verse. What I found funny (but makes sense since the composer and lyricist is a woman) is the line at the end where Ari says ” For a mother is forever, and forever you’ll be mine”.
9) Choices- (Composed by Miriam Israeli)
This is a real fun song. The lyrics flow really well. (Miriam Israeli is one talented woman. She’s a pro at composing Hebrew and English lyrics) The song is about making the correct choices in life.
10) Live In The Sky- (Composed by Dror Kevodi)
I can’t figure out the meaning behind the song and I actually enjoyed the verse better than the chorus, which is a little unconventional .
Summary: A real geshmak album with beautiful songs. Non-stop listen.