One Week Later: Simchas Hachaim 4- An All Star Album 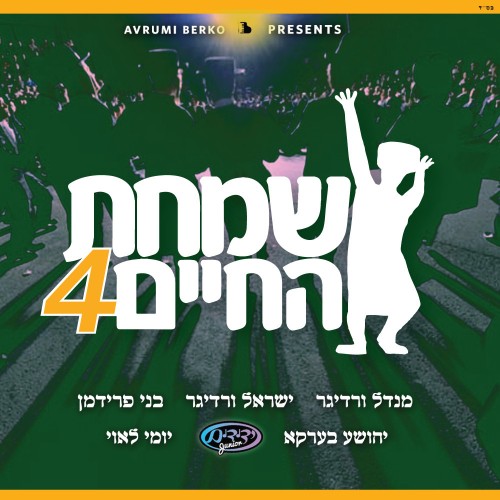 I must admit that I never heard a Simchas Hachaim album before. Not the first album nor the second or third. I don’t what I was thinking, because after hearing the fourth version of Simchas Hachaim, I have to say it, I’m hooked!

The Yedidim Choir and Junior Choir join the already stacked group of talent to make this album filled to the brim with potential. Let me tell you, it doesn’t disappoint!

There are 5 sets to this album: Torah Medley, Freilach Medley, Chabad Medley, Lebedig Medley, and finally, the Hora Medley. Here’s the song by song:

EITZ CHAIM- Yisrael Werdyger starts off this album with a slow Eitz Chaim intro, followed by the actual song. This song comes from Shir, and that means it’s a Shlomo Yehuda Rechnitz composition. It works very nicely with the adult choir and children’s choir singing harmony and backups. Great song to start off the album.

BATORAH- Sung by Benny Friedman, this song originally comes from the Eli Hertzlich debut album Chosson Domeh Lamelech. It was composed by Dudi Kalispell and is a good song to continue the Torah Medley.

YESH BATORAH- This song first came out on the Dirshu album, sung there by Shlomie Daskal. Composed by Moshe Mona Rosenblum, it’s sung on this album by Sheya Berko who does an excellent job on it.

VENISMACH- Sung by Mendel Werdyger, this song was composed by Abie Rosenberg, and is quite good. With this song, the Torah Medley ends.

HAREINI MIZAMEN- Composed by Isaac Honig, this song begins the Freilach Medley. It’s sung by Benny Friedman and is a pretty good song.

FREILACH YIDDEN- Sung by Mendel Werdyger, this is a great nigun composed by Yom Tov Ehrlich. A fantastic song on the album.

AHALLELO- This song is making it around. Sung by Yuma Lowy, originally from Skver, it’s a favorite of mine. I like Yuma Lowy alot. He’s got a terrific voice and it really shows in this song.

TISHIOSOM- Another song from Yehuda Green, this one from his latest album, Barcheini, this purim song is sung by Sheya Berko and ends the Freilach Medley.

NIGUN AVOD- To start off the Chabad Medley, (one) ofthe most famous Lubavitchers, Benny Friedman, in a nigun that I love. I really like the energy that Benny brings to the high part.

ASHREINU- Sung by Sheya Berko, this is an Ashreinu that I’ve never heard before, but it’s very good.

NIGUN KILEMENOVITCH- Sung by Yisroel Werdyger, I’m not sure where this nigun comes from but my guess is Chabad being as its the Chabad Medley. It’s a nice nigun.

DARKECHO- Sung by Mendel Werdyger, this is another nice Chabad type nigun, and with this song, the Chabad Medley ends.

AL ACHAS- Time for the Hora Medley. Which Hora doesn’t include the now classic song from Yeedle, Al Achas? Well, here it is to start us off. Sung by Sheya Berko, originally composed by Dudi Kalish, this is a great version of the song.

MAI DEHAVE- I never heard this song, but I’m in love with it! Sung by Yumi Lowy, it was originally composed by Dudi Kalish (again).

HABET NA- Sung by Benny Friedman, this song is good, and Benny singing it makes it that much better. Composed by R’ Shmuel Brazil, this song continues the Hora.

CHASIDIM VEANSHEI MAASEH- Not a big fan of this song, sung by Yisroel Werdyger, it’s a little dry to me. Composed by Meir Adler.

ZEH HO’OIS- This song is a favorite of mine, so much so that I started playing it on Fridays. Sung by Benny Friedman, composed by Yossi Green, this is an excellent song and I’m a big fan. This song ends the Hora Medley (on a high note).

LEFICHOCH- This song starts Lebedig Medley. Sung by Yisroel Werdyger, this song, composed by Chaim Barnet, is great and is a good way to start getting Lebedig.

RIKUD OD YISHOMA- Sung by Mendel Werdyger, composed by Meacham Irnstein, this song doesn’t get any attention from me.

SHEYEHEI HAKOL- Composed by Moshe Mona Rosenblum, you don’t get a much better song than this. Sung by Yisroel Werdyger, this song is amazing and I replay it over and over.

ANI MAAMIN- A nice song to finish off the album. Sung by Yumi Lowy, and composed by Skulen, it’s another good choice for a song and was sung very well.

In conclusion, if you are a fan of all star albums, then this is one you should pick up from wherever you buy your music from. Even if you are not though, this album has a lot of fun songs to dance to and should be worth it to check out.