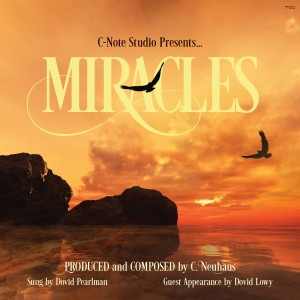 ‘Miracles’ is the brainchild of composer/lyricist extraordinaire, Chayala Nuehaus. While she’s been involved in music for many years, and has composed timeless favorites known to female audiences all over, the males have never had the chance to enjoy her works.

‘Miracles’ was created to change that. Chayala joined forces with MBC star soloist Dovid Pearlman on this amazing project. In her own words “I worked with Dovid for quite a few years on different projects for the consortium of day schools. His talent was really astounding for a young boy and when I decided to do the album he was really excited to be a part of it.”

All songs were arranged by Nochi Krohn and Chayala except where noted.

Adon Olam is the perfect opener track. It’s a fast paced techno song that gets you grooving! The vocals and harmonies are superb. (I can reiterate that throughout the album.) Halfway through the song there’s a short slow bridge which builds up again and leads to the final ‘Adon, Adon Olam’.

I was pleasantly surprised when I opened the booklet and recognized the lyrics to the widely popular/all time favorite ‘Miracles’. (at least with my friends, family and basically every female in town :) ) It’s a very pretty ballad with excellent arrangements. The lyrics are about exploring the everyday wonders of Hashem.

Becharbi is a folk/rock number with a heavy dosage of electric and acoustic guitar. The lyrics are inspiring and impress upon us the importance of tefillah.

4) Shabbos at the Kosel- (arranged by Jeff Horvitch and Chayala)

This relaxing melody stars Dovid Lowy (Who recently released his debut album ‘Ata Imadi’.) as the lead vocalist, and Dovid Pearlman doing the harmonies. Every time I listen to the song I’m transported back to my recent trip to Eretz Yisroel and Friday Night at the Kosel. It’s a humbling experience which is so eloquently portrayed in this song.

This song is about the power of our tongues and it’s either good, or bad consequences. ‘Words can build, and words can break’- So true. The lyrics are empowering (no pun intended).

Time for some fun! Composed and sung by Dovid Pearlman and Mordechai Gifter (NYBC Soloist) this song lets you have it! The track starts off with clapping and some cool ‘Moh Moh’s ‘, and transitions from techno to electric guitar. Dovid does a short chazzanos- style piece at the end. Very cool song!

This beautiful, unique song is my favorite off the album. The words are about Esther Hamalkah in the palace, reaching out to Hashem in her pain. The second verse is about Am Yisroel today, and our own cries for salvation. The vocals and harmonies are gorgeous ; Dovid really shines. The arrangements are stunning. A real masterpiece of a song.

This song is about each stage in a Torah-infused life ; from an upsherin boy and his honey-sweet Alef-Beis, to the Bar Mitzvah Bachur, to the beautiful simcha of a Hachnasos Sefer Torah. It starts off slow and gets faster as the song progresses. (At certain parts in the song Dovid reminds me of Country Yossi. I don’t know why.) I love the rousing ‘Shalom!’ at the end.

Another favorite of mine. The intro reminds me a bit of Ari Goldwag’s Koh Ribon. The lyrics are about Shabbos and our anticipation for the arrival of Moshiach. The background vocals are done by Aryeh Pearlman, Dovid’s father. The song has a real camp- kumzitz flavor to it.

Summary: This album is really worth it! It’s inspiring and very well done. Kudos to everyone involved.