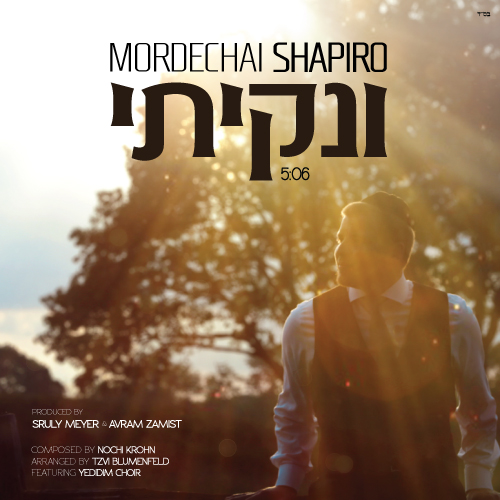 Since his Debut as the star soloist of the Miami Boys Choir in 1997, Mordechai Shapiro has continued to inspire crowds world wide with his music. His first video on youtube “Rachem” sung with Yaakov Shwekey received over a million hits combined and his most recent music video “Ani Maamin” has over 100,000 views.

Mordechai is currently working on his debut album with producers Sruly Meyer and Avram Zamist, which will feature songs from many of the top composers in the industry. Before you get to enjoy the songs from this upcoming album, Mordechai and his team wanted you to get a taste of what is to come, with this cover of the Nochi Krohn classic.

This incredible song, first featured on The Nochi Krohn Band’s debut album “Ananim” is a favorite of many Jewish music fans, we hope you enjoy this rendition.

The song, originally composed by Nochi Krohn, was arranged by Tzvi Blumenfeld, and features the very talented Yedidim Choir. The song was mixed by Chaim Gottesman, and is available as a free download at MostlyMusic.com

For bookings or other information please call 845.642.5580 or go to MordechaiShapiro.com