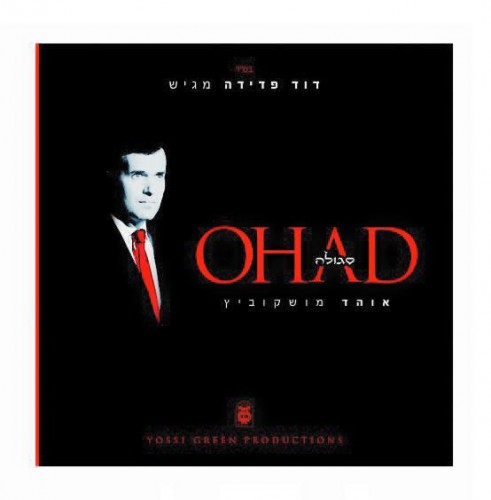 OHAD is back better than ever, after singing all the word for the past several years, when he is off duty, he got to record parts of this album and is finally out. It very appropriate that is band leader, Gershon Freishtat arranges this first song after all, is the perfect Segway from weddings and tours into this album.

Here we go, nice intro. Welcome back. This song is masterfully arranged by Gershon Freishtat. Watch the song time of the low part, with the unique background vocals of Itzik Dadya. Then comes the duet with the “Digital” OHAD and Itzik Dadya “Kol Hatzadikim Kol…” . Goes on for almost a minutes. The song then resumes and goes back to the “Kol Hatzadikim Kol..” (Without OHAD).

This song could have been on OHAD’s Second album, but it ended up on this one for various reasons. Really nice classic Yossi Green OHAD style song. Nice arrangements by Yisroel Lamm. Beautiful vocals by OHAD.

Here comes Moshe Laufer with his latest song composed and arranged by him. I can see this be a big wedding hit (although I heard it already is!). Really nice Wedding Freilech. OHAD is all over this song with a nice note at the end! Background by Avrumi Berko and the Yedidim Choir.

This is the remixed version of Madua with OHAD taking lead and doing what he does best. Composed by Shlomo Yehuda Rechnitz and arranged by Eli Cohen and Yitzy Berry. Shira Choir does the background vocals on this song. This song was composed and memory of the Sassoon Children. OHAD reaches a very high note at the end of this song.

Wanna hear a song that could have been composed by Eloi Gerstner, but has that special OHAD feel to it, L’melech is the song on this album that I would vouch to say is the next “Malchuscha” or even better! Background vocals by “HaAchim Weinberger” composed by Eli Klein and arranged by………….Eli Cohen and Yitzy Berry. These guys are really getting better! I love the part everybody sing….L’Melech! Nice Hora!

Ok, here it is, the song that will transport back to the Yossi Green classics of “Tanya” and Dedi’s “Rotzoh” this three part song, without drums at the beginning, 2nd part with drums and then fast part creates a masterpiece with those classic Yossi Green vocals, and moving kumzitz 2nd part and then Freilech 3rd part! Ending off going back to the 1st part and then a GRAND SLAM FINALE for OHAD! Features background vocals from Yossi Green. Composed by Yossi Green and Arranged by Moshe Laufer

Here is multi-talented Yoely Dickman’s contribution to this album, his first for OHAD. Yoely Dickman really does an amazing job for his debut song for OHAD.  The low part reminds of the song “Amar Rabi Akiva” from OHAD’s first album. Hearing the philharmonic beauty and Ohad is truly a masterpiece. Background vocals Michael Weinberger and Yaakov Rotblatt. The song part songs very heimeshe and Freilech. Check out the part where OHAD goes higher, and then ends of the song with a nice high note. With the choir doing a nice ending only Yoely could of arranged!

Composed by Eli Cohen. Arranged by…………….. Yep again Eli Cohen and Yitzy Berry. I can see this song being a big kumzitz hit. Background vocals by the Yedidim Choir. I cannot really describe song, you just have to listen to it. Nice Chazzanus at the end.

The melody of the song was composed by a non-Jewish singer, but the words beautiful fit here. No comment and wither these things should be done on not.

I would highly recommend this album, go get it on mostlymusic.com or at you’re your local Judaica music seller.

Thanks to David Fadida, Producer, Yossi Green, Eli Berry and Yitzy Berry and off course Yitzy Dadya for recording OHADs vocals (and his), and of course OHAD!