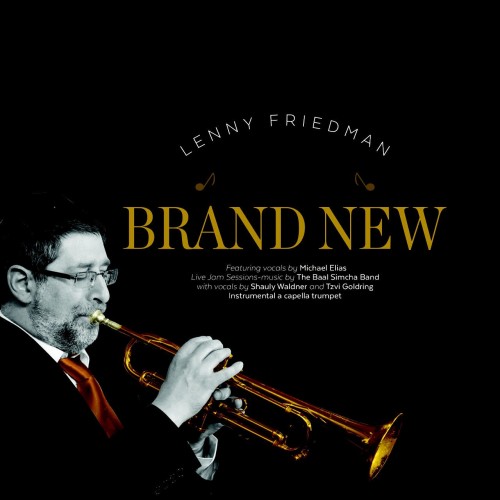 Today I’ll be reviewing a new album released by Trumpeter Lenny Friedman. Lenny has been on the “Simcha Scene” for years and has played alongside many singers and musicians. I had the opportunity to speak to Lenny about his intention for this album and from our conversation the answer is really quite simple. Lenny explained that while the majority of commercially released music is created using advanced editing techniques (Autotune etc.), he has noticed that even live clips released by some tend to be edited as well. He feels that this takes away from the talent one can hear within a “live” album.[Live In Studio recording means that the entire band including vocalist and conductor were together and recorded live and simultaneously-versus-the more prevalent method which is having different instruments, vocalists, and back-up vocalists recording their musical pieces separately which are then edited to work perfectly in time with one another] In this case, Lenny delivers an album that is recorded completely live, while retaining the quality one would expect from a conventional album release. Throughout the album you will hear exactly what the musicians (and singer) sounded like without any electronic altering of notes played, performance, or timing. This album consists of 3 parts, the original songs, the “jam sessions” recorded at Lenny’s children’s weddings, and Trumpet “A Cappella” (We’ll come back to explain that one afterwards). Let’s get started with the review!

Simchas – the album starts us off with a common thought “A wedding a Bar Mitzvah, and a Kiddush, it’s a Simcha, invitations just keep coming every day”. The Lyrics were written and the music arranged by none other than Lenny himself. This song is sure to have you tapping your foot to the beat while wondering how he could be having the exact same thoughts you do on a regular basis. Featuring powerful vocalist Michael Elias and some instrumental solos by some extremely talented musician friends this album definitely starts off on the right foot!

Bashert – This next song reminds us that whatever happens (at Simchas or otherwise) it is all Bashert. We are led through a number of situations where one may get frustrated, from getting stuck in traffic to being in a dead-end job. The chorus lets us know that everything is part of Hashem’s plan.

Brand New – We arrive at the title track of the album! Just in case you weren’t already aware that this album is different from the majority of other Jewish music albums, this song will remind you that this album isn’t comprised of the “same old songs”. While I do enjoy this song, in my humble opinion at this point in the album I’m not sure the listener needs to be told this since it’s obvious from the approach Lenny took with this album that it is in fact Brand New! Regardless this song is worth having on the album for the trumpet solos alone.

Lipa! – This next track starts us off with a Middle Eastern groove working its way into a Disco. That may just be the best way to start a song written about none other than Lipa Schmeltzer! Not only does Lenny offer his own original songs on this album, that’s right! He went and wrote original lyrics about Lipa! This song points out some of the special traits that make Lipa the superstar he is. This track also features some amazing guitar playing by Bill Nelson as well as some amazing saxophone playing by Ofer Assaf.

Lenny’s Jewish Jam I – With over 5,000+ views on YouTube, this track was organized by Lenny on the occasion of his daughter’s wedding in 2009. Featuring the “Baal Simcha Band” this “jam” starts us off with the well-known tune “The Place Where I Belong” heard originally on the first “Journeys album”. While this song starts us off, the track takes on a mind of its own as each musician in the band takes a turn at adding a healthy dose of creativity to the original melody.

Lenny’s Jewish Jam II – Continuing in the tradition Lenny started at his daughter’s wedding, Lenny was ready for round 2 at his son’s wedding as well. This “jam” also has thousands of views on YouTube and the number is still growing. Featuring vocalist Shauly Waldner and supporting vocals by “Baal Simcha Band” bandleader Tzvi Goldring,  singing a rendition of “Lo Omus”, the track does what Lenny’s jams do best! All the musicians within the wedding band contribute their own unique flavor to the arrangement to take the music to the next level.

Lev Tahor – You may have been asking yourself since the preface of this review what A Cappella trumpet is. The simple explanation is that the majority of the tracks recording for the next 4 songs are all Lenny on his trumpet as well as playing all the percussion, Lenny created these tracks from scratch and recorded them himself. (He’s creatively using a very liberal definition of a capella-as he is “unaccompanied” by anyone but himself) The first one up is “Lev Tahor” made popular on the first “D’veykus” album.

Eishes Chayil – The next “A Cappella Trumpet” track is Eishes Chayil from the “Oif Simchas and Friends” album. While I’m sure that Lenny plays these songs all the time at weddings, there is no lack of energy when it comes to his playing and he is able to put a fresh twist on each recording as he plays through the songs. In the “live” spirit of the album, all sounds heard throughout these tracks were recorded by one musician (Lenny) recorded on multiple tracks. There is no “looping” (a term used to explain taking a drum beat performed perfectly and “copy-pasting” it over throughout a song to keep it perfectly on time), on these selections.

L’Hashem Ha’Aretz – This next track sounds so unlike the original song that you probably won’t realize which song it is right away. Lenny completely reimagined the arrangement of this song. Between the percussion and the way the horns are all playing their own separate pieces which still work in perfect sync with each other you’ll wonder where you can go to hear this performed live. Keep in mind that due to the way this was recorded, unless you get 7 musicians together to recreate this, you’ll have to be content with this track of the album.

Somewhere – Lenny finishes the album off with his take on a classic American solo trumpet piece. While throughout the album you’ve heard a plethora of different musicians and even a couple of vocalists thrown in, this final track showcases the man behind it all, Lenny Friedman himself. From writing the songs in Part I to arranging and conducting the 2 “jam band” performances, to his original A Cappella trumpet tracks, Lenny has proven himself to be a multi-talented musician.

If you appreciate live, unrehearsed, and non-overprocessed music, and you find yourself wishing that more CD’s would have the “live” energy that you get to hear at weddings and concerts, this is the album for you! Featuring amazingly talented musicians, vocalists, and with a couple twists and turns thrown in along the way, you will enjoy listening to this album many times over.