The Definitive Interview: Eli Gerstner on “A Time for Music 29” 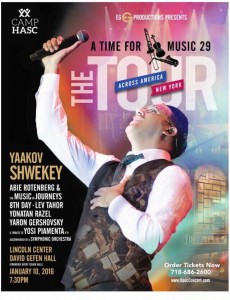 A Time for Music.

The words evoke a certain imagery—a top notch concert hall, a large orchestra, the biggest names in Jewish Music, and raising funds for the special children of the Camp HASC summer program.  The list of great moments is almost as long as the Who’s Who list of headliners: MBD and Shlomo Carlebach dancing together at the end of HASC 2, Abie Rotenberg debuting any number of special melodies composed for the occasion (“Who Am I”, “A Small Piece of Heaven”, “Candles”, etc.), a Camp HASC camper playing “Hamalach” on the keyboard at Radio City Music Hall (HASC 7), Matisyahu blowing away the audiences at Madison Square Garden (HASC 18), the Fried(man) family dynasty singing with Diaspora Yeshiva Band (HASC 27)…I could go on and on.

January 10, 2016, will be the 29th iteration of the Camp HASC concert, once again at the venue formerly known as Avery Fisher Hall (now called David Geffen Hall).  Yaakov Shwekey will headline the event, as well as Abie Rotenberg, Lev Tahor, 8th Day, Yonatan Razel, and Yaron Gershovsky.  While most of these are familiar names to people who have followed these concerts closely over the years, several things have changed for this year’s event.  This year, the production of A Time for Music has been entrusted to Eli Gerstner, founder and producer of the Yeshiva Boys Choir, the Chevra, and others.  The other surprise twist of Camp HASC’s announcement is the fact that there will be multiple HASC concerts this year.  The January concert in New York City is only the first show in what is to become a new series of events featuring Shwekey and Gerstner’s team: a dozen or more shows across America, all featuring Yaakov Shwekey and benefitting Camp HASC.  While dates for subsequent shows have yet to be announced, Eli Gerstner told me that we can expect shows in cities large and small, bringing the A Time for Musicexperience to thousands of people who have never had the opportunity to attend a show before.

Over the course of our conversation, Eli shared with me a lot of information about the production of a show (or a series of shows) of this magnitude, and I definitely learned a lot.

On the “A Time for Music” orchestras:

Eli said that his focus when putting on a show like this is making sure the stage itself is impressive.  While the size of the A Time for Music orchestra has varied over the course of time, Eli said that he wanted to recapture the “grandeur” and experience of the early shows, which featured 65-piece orchestras and 101-voice choirs. “Maybe not quite that big…you still need room on the stage for the video equipment and the lighting, which is an integral part of a show in 2016,” he said. “But we are definitely aiming for that full symphonic setup, which will be a part of all the tour stops”.

On Eli Gerstner’s role in the concert:

Unlike the four previous times Eli has appeared at A Time for Music (together with the Yeshiva Boys Choir), his role will be completely backstage.  “Usually, for example at YBC Live, I conduct the orchestra and direct the show at the same time.  I have two mics in front of me—I use one to talk to the musicians and the other one to talk to the crew backstage.  This time, though, it made more sense for me to run the show just from a production standpoint, and we will have several different people conducting the orchestra at different points in the show.  This way it keeps the feel of the concert fresh over the course of the evening.”

On putting together a show of this size:

When I asked what the most difficult part of the show was to put together, Eli laughed.  “It’s actually a boring answer, but the business side of it…negotiating with the unions and other people we need to make the show a reality—that’s the hard part.  The music side of it is fun.  It’s me and people I’m friends with, doing what we love to do!  What could be hard about that?”

On electronic vs. orchestral music:

I remarked that Eli’s typical studio production (YBC, Chevra, etc.) had a definite tilt towards electronic music, and I asked how that translated to producing a show that promised a symphonic arrangement.  He told me that he actually personally prefers orchestral music, and, while his studio albums are heavy on the synthesizers to appeal to his younger audience, the HASC Concert audience skews older and shares his appreciation for real live instruments.

On Journeys and Lev Tahor:

When I asked about Eli Schwebel and Lev Tahor making an appearance at the concert, Gerstner said that he was thrilled that they were able to take part.  “I’ve been really good friends with Eli and Gadi [Fuchs] for a long time…I had originally asked them to come to be Abie Rotenberg’s backup singers, because they had done such an incredible job on Journeys 4.  Then they mentioned that they were planning on releasing a brand new album very soon, so I asked them if they wanted to perform any of their own material.  And they said yes!  So that worked out great.”

On keeping what makes “A Time for Music” special, and Gerstner’s favorite HASC Concert moments:

I asked Eli what elements from previous HASC Concerts he would make sure to keep—you know, besides its iconic fanfare (sing it with me: “Dim the lights and raise the curtain/It’s that special time of year…”).  He told me that he is producing the show as a fan of Jewish Music.  “I am trying to produce a show that I would love to attend.  My all-time favorite moments from previous concerts are, first, Abie Rotenberg’s tribute to R’ Shlomo Carlebach [from HASC 8 it appeared on the first Unforgettable Moments recording], and, second, Yaron Gershovsky’s piano rendition of “Hamalach” [from HASC 5], and I wanted to make sure that the concert that I produced had moments like that.  So, we’re going to do a tribute to Yosi Piamenta—not necessarily by Abie, but you get the idea—which I think will be really nice.  And we have a really great piece that Yaron is going to perform.  I can’t go into details, it needs to be a surprise, but I guarantee that it will be amazing.”

Special thank you to Eli Gerstner for taking the time out of his busy schedule to talk with me for the purposes of this article.  Tickets to A Time for Music 29 can be purchased at www.hascconcert.com and start at $100 per person.